To what state(on/off) does the Vds figure in a MOSFET gate charge curve relate and how does the Id affect it?

For example, this is the gate charge curve of a p-MOSFET: 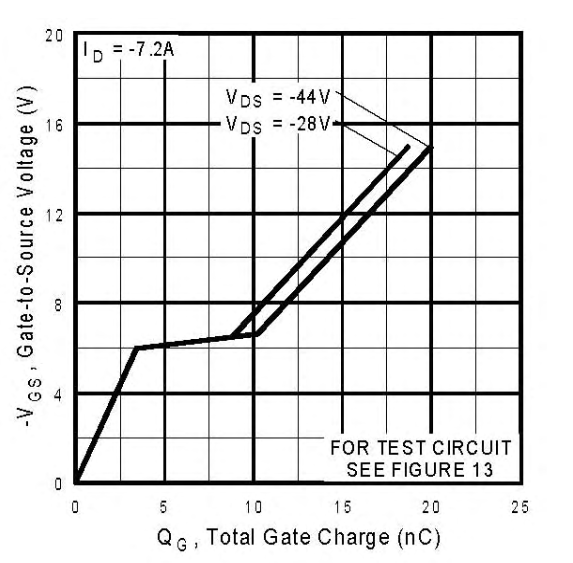 Let's say this p-Mosfet works as a simple high-side switch for a load. This load will have significantly more resistance than the mosfet in it's ON-State, so the voltage across the MOSFET will be very small.

I assume the ID is the current that will flow in ON state and that VDS is the voltage in OFF state here, is that correct?

Also, how would this curve change if the Id was very low, 1mA? (For example, we're switching a 24V supply for a 24k Ohm load, the voltage drop across this particular p-mosfet would be in the vicinity of 5mV in that case.

In other words, I need to know how the total gate charge to switch the MOSFET will change if I'm switching a load with much more resistance than the R_DS_ON.

how would this curve change if the Id was very low, 1mA? (For example, we're switching a 24V supply for a 24k Ohm load... how the total gate charge to switch the MOSFET will change if I'm switching a load with much more resistance than the R_DS_ON.

The Gate charge graphs supplied in most datasheets don't cover this scenario, so I decided to do my own tests. The answer is:- probably not much.

I tested a BS107 on a 12V supply with various loads ranging from 0.1mA to 100mA, driving the Gate with 10uA constant current to measure the accumulated charge.

At all load currents the time for the Gate to reach +5V was 84us, showing that the same amount of charge was accumulated. However there was a noticeable change in the 'plateau' voltage that occurs due to Miller effect as the Drain voltage goes down, which ranged from 1.8V at 0.1mA to 3V at 100mA.

Here is the scope trace for 1mA load current, showing Gate voltage plateauing just below 2V. At lower and higher currents the waveform was the same except for the plateau being at different voltages. 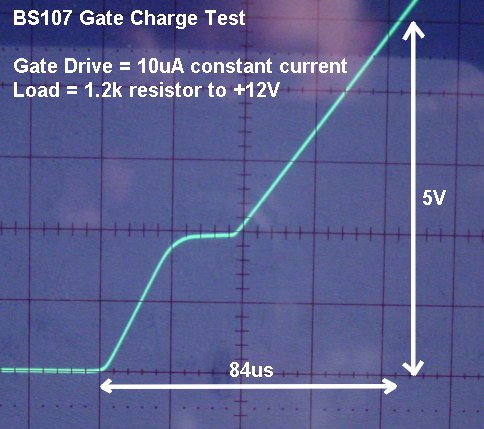 While the Gate voltage is plateauing the FET is operating in its linear region dissipating high power, so when switching high current you need to get through it quickly. However at low current the plateau voltage is lower and dissipation is less of a concern, so you might be able to get away with weaker and/or lower voltage Gate drive.

The importance of the gate charge data to the designer is illustrated in the Vgs vs Qg .

This is a FET pulse V,Q charge curve to choose I, t tradeoffs.

Since the gate impedance is dominated is basically a capacitor between gate & drain similar to Miller capacitance and series gate resistance. Also the drain voltage transition dV = Vd which is the is initial drain voltage being drained, these cancel.

However the Miller Capacitance is nonlinear. 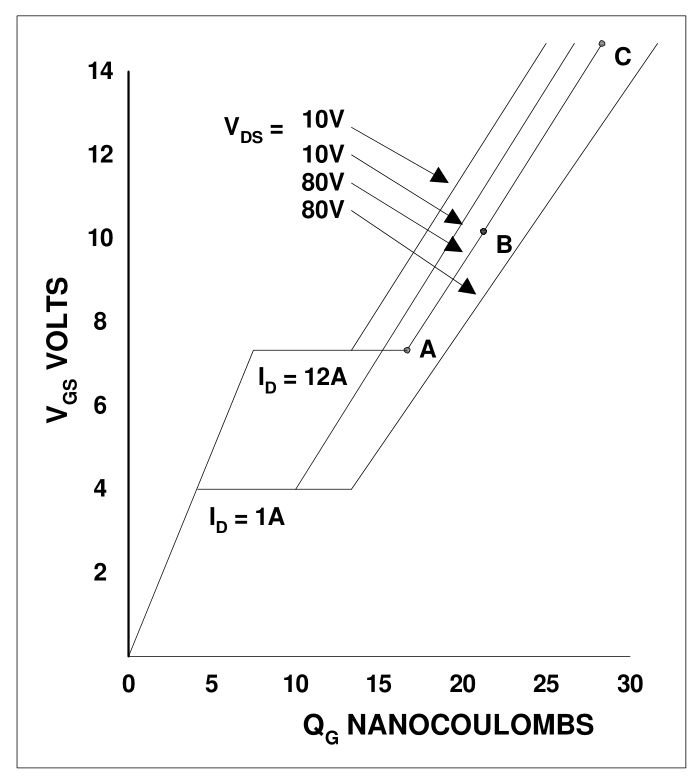 They cannot show every scenario of Vgs , Vds and Id but the “bottom line” importance is the total gate charge required for switching. The gate drive current depends also on Vgs slew rate but for this test curve a constant current source to both gate and drain is used.

The initial Ig current of turn-ON is Qgs until threshold Vth is reached then Vgs remains constant ( since source current Id is now active and is constant) with a gate test current source controlled by Qgd as Vds drops to RdsOn*Id next Vgs rises to max from dV/dt=Ig/Cg. So the test circuit uses a switch to activate a current source to the MOSFET Gate then a drain current source to record the Gate Charge curve.

E.g you would not choose a 1 millohm FET to switch 5mA load with a voltage source because the gate current could be more than an Amp due to Cin with a fast dVg/dt. RdsOn and Cin (Ciss) products (T=RC) are somewhat of a constant in a given MOSFET family and a common figure of merit, (FoM) for comparison. but the bottom line is Qg*RdsOn.

Not the answer you're looking for? Browse other questions tagged mosfet capacitance charge or ask your own question.

9
Why is the gate charge curve (Miller plateau) of MOSFETs dependent on Vds?

20
Gate capacitance vs. Gate charge in n-ch FETs, and how to calculate power dissipation during charging/discharging of the gate
9
Why is the gate charge curve (Miller plateau) of MOSFETs dependent on Vds?
5
How does the drain current flow in a MOSFET when the channel is pinched off?
1
Drain to Source Current Waveform on Mosfet is Slow
1
using 1.8V, max 40mA to switch a 12V, 70mA load (MOSFET data sheets?)
6
Driving a MOSFET with Negative Off- State Gate Voltage
0
In what condition power MOSFET gate capacitances Cgs and Cgd can be paralleled?