Torque kgcm (what is kgcm)?

I know what torque is but I find difficult to understand what Torque: 3kgcm means ?

I am not sure, how much weight that motor can carry, and I want to know how I can calculate that.

Please give me some hints :)

Torque is usually expressed as a Force x a distance So for the same Torque if you double the distance you halve the force to get the same answer.

So kg.cm is kg force x centimetre distance.
In fact kg are a mass and not a force BUT kg are sloppily used as a force in many cases.

BUT pound IS in fact a unit of force. The corresponding unit of mass is the Slug where
1 Slug weighs ~32 pounds force.
You will not find people selling vegetables by the slug, or by the Newton :-).
A Newton glass of beer is about 4 ounces.

This is just happenstance as various constants cancel almost exactly but it is extremely useful. Accurate to about 1%.

I have spent many long hours playing with dynamometers while developing alternator brakes and controllers to act as loads for exercise equipment.
The approximation

A motor with 1 kg.cm torque is capable of holding a 1 kg weight at a radial distance of 1 cm.

Here is a diagram to explain. 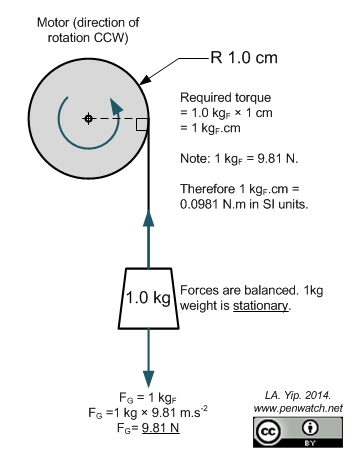 Torque is the cross-product of force and distance: \$ \tau = F \times d \$. So the same weight, at twice the radial distance, will require double the torque. 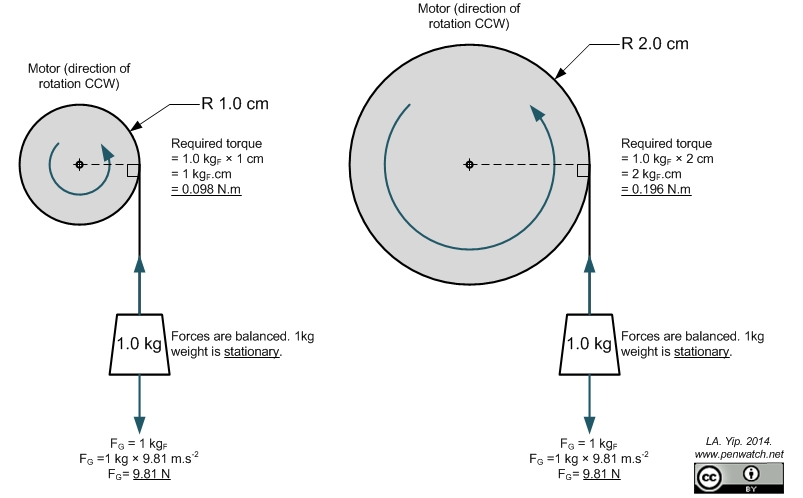 Note that the measurement 'kgcm' is 'kilograms-force × centimetres' and would be clearer if written as \$ kg_F.cm \$, which avoids confusion between kg (mass) and \$ kg_F \$ (force.)

The SI unit of N.m, which doesn't depend on the exact value of Earth gravity, is preferred instead.

kgcm would be kilogram-centimeters, the motor is very old or the manufacturer does not like SI units. Anyway, 1kgcm is 0.09807Nm.

If you want to lift more than that, you need a gearbox that reduces the speed, but increases the torque.

Torque is a measure of force times distance. Think of turning a nut with a wrench: the further out the wrench you pull, the easier it is to turn the nut. This is because the same force, further out the handle, gives higher torque, because it has to apply that same force over a longer movement distance to do the work. A gearbox also uses the same principle, it's a way to exchange distance from center for distance of movement to step up the torque.

US units are dumb, because they use the same unit ("pound") for both force and mass, even though they are different. SI units are better, because they use one unit (kilograms) for mass, and another unit (Newtons) for force. A kilogram of mass will typically exert 9.81 Newtons towards the center of the Earth under normalized gravity (varying depending on where you are.)

I've seen a lot of motors with torque expressed in kgcm, and I don't quite understand why that is. Perhaps someone translated pound-inches (or the 12 times stronger foot-pounds) and used the wrong destination unit at some point, and the convention stuck. In countries that use real SI units, you want torque in Newton-meters, and if you have small stepper motors or whatnot, you may get Newton-centimeters.

The best way I use to test stepper motors is just using a known diameter pulley, hold the motor in the corner of the table with a vise, wrap a wire in the pulley and tie a container (plastic small bucket) at the end of the wire, run the motor to move the bucket up and down while slowly applying weight into the bucket until the motor could not lift it anymore. Normally I use screws, bolts, nuts, heavy metal parts as weight. When the motor stalls, I remove some until the motor is able to lift the bucket again. The total weight (kg) of the bucket multiplied by the radius (cm) of the pulley, badabim, there is the torque of the motor in kgf-cm. Also, by doing that you can test different ways to drive the motor, with PWM or microstepping, and see different torque responses from the motor.

There is nothing "sloppy" about using kg/pound/ounce/gram for both mass and force simultaneously as long as you recall that torque is rotational.

All of the units of torque: kg.cm, lb.ft, oz.in, g.cm can all very easily be thought of as the amount of torque needed to move a point mass of the stated weight on the edge of a disc being spun by the motor that has the torque rating. Rather than the example of suspending the mass above, think of the mass on the edge of the disc going around as the motor drives the disc around. Not all motors can move all masses on these discs. Only the motor whose torque is equal to the mass times the radius of the disc can be moved. If a 3 kg mass is at one point on the perimeter of a disc of radius r cm, then in order for that disc to be turned, the motor must have a torque of 3r kg.cm.

Not the answer you're looking for? Browse other questions tagged motor torque or ask your own question.