I have a problem in testing a transformer recovered from an old wall wart. The transformer has several secondary taps: the wall wart had a slide switch allowing the selection of four different dc outputs via a bridge rectifier and capacitor.

I connected the ground clip of my oscilloscope to the transformer wire that had connected to the common of the switch, then connected the probe tip to each other wire in turn to measure voltages. The resulting voltages made sense, for example a 10.6Vrms waveform was measured for the tap that had provided 12Vdc.

The problem arose when I tried to measure the voltages under load, as in the previous measurements I had simply placed the scope across the secondary taps directly. To do this, I connected a 1k resistor across the highest tap (10.6Vrms as above). This was a light load and well within the maximum rated secondary current of 1A. I then connected my scope across the resistor. I expected to see a somewhat lower voltage under load, but measured a flat 0V.

I can make no sense of this result, and feel it must be a basic misunderstanding. I have tried other smaller and larger loads of 10k and 100R with the same result.

Below is a diagram of the setup. I am omitting the other secondary taps. 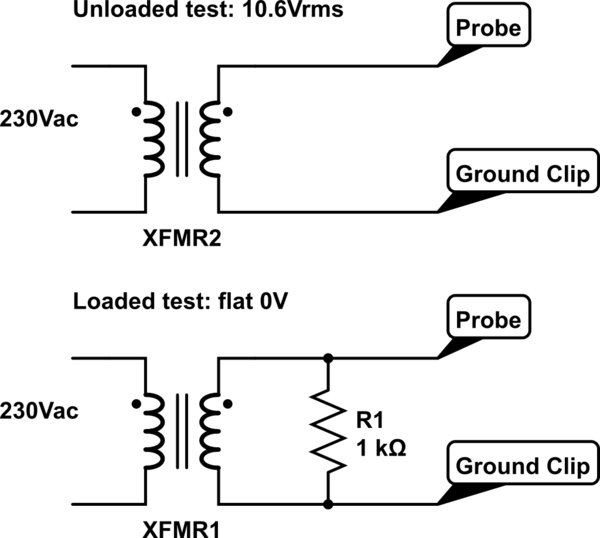 Edit: The comments helped me to resolve the issue.