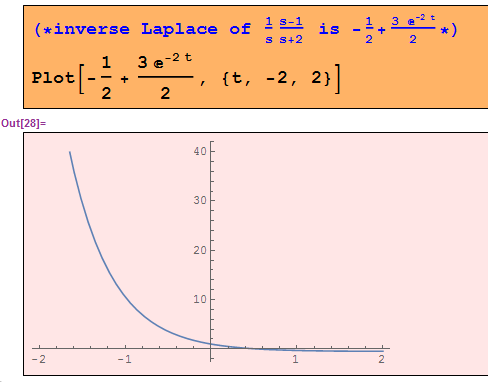 Just complementing the well presented @SuperGeo answer. I think it is important to clarify two points here, which can be cause for confusion:

1. The use of the bilateral Laplace Transform rather than the unilateral one (most used in control systems, when \$t \geq 0\$). In the latter case, the temporal response must include a multiplication by the unit step function \$1(t)\$.

2. The choice of a not strictly proper transfer function as example. In this case, the step response include discontinuities at origin (\$t=0\$). When degree of the numerator is equal to the degree of the denominator, the step response presents a step \$1(t)\$ at origin (for the impulse response, there is a impulse \$\delta (t)\$ at origin). So, there will be a direct path between input and output.

Generically, a first order system like the one below, has a unit step response \$s(t)\$: 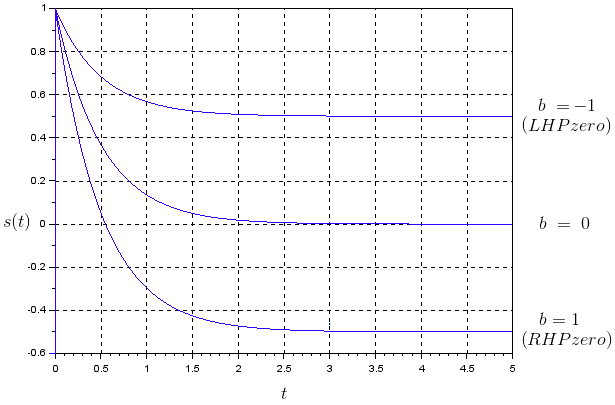 The examples most frequently presented in the literature for RHP zero behavior are concerned with strictly proper transfer functions and underdamped case (for order 2 or higher). Example: 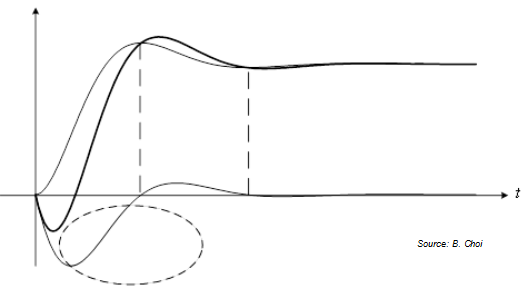 At t=0, you have y=1 (could be found considering s->inf in the transfer function).

So the non minimum phase zero in this system, considering a unit step in t=0, makes the output go from zero to positive (t=0, y=1) before coming back to negative (t=+inf, y=-1/2) in steady state. I believe your graph represents just that.

Not the answer you're looking for? Browse other questions tagged circuit-analysis power-electronics circuit-design control control-system or ask your own question.

8
Is there an English word for the output response of a non-minimum phase system?

3
Differences between Linear and Non Linear WECS models
2
Is impulse response always differentiation of unit step response of a system?
0
Overshoot more than 100%
0
Why phase bump causes signal distortion in source follower?
2
Why is this system stable?
1
What is a non causal system?
8
Is there an English word for the output response of a non-minimum phase system?
0
Maximum overshoot and settling time for a 2nd order system
0
Remove big valley in phase plot