I was reading an answer in Quora about how 3-phase electricity is generated. There was a picture in the answer: 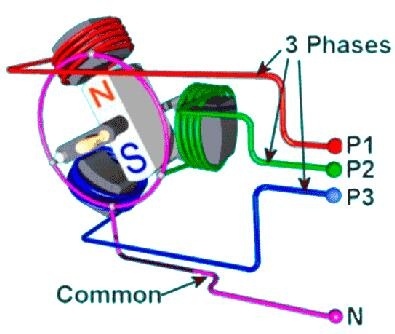 Is it right to say that the generator above can produce 3 oscillating currents with 120 degree shift regarding in each coil based on Faraday's law of induction? Or it's just an oversimplified version that can not actually generate 3-phase electricity?

If it does, there are 2 coils for each phase in real-world 2-pole generators? (having 6 coils for generating 3 phases instead of 3 coils)

Is it right to say that the generator above can produce 3 oscillating currents with 120 degree shift regarding in each coil based on Faraday's law of induction?

I'd say it produces 3 "sine wave" voltages each at 120 degrees apart. Faraday's law of induction is: -

It doesn't mention current. The current is produced when a load is attached.

I also put the term sine wave in quote marks because the shape of the poles and their placement are critical in producing low harmonic distortion sine waves. A simple diagram as you have shown will produce waveforms that are not very sinusoidal.

Doubling up on the number of poles usually means that the same three phase voltage is produced with a frequency F at half the rotational speed of the armature.

EDIT - as far as the picture with 6 poles in the question is concerned, opposite poles are connected antiphase so this will still produce the same output frequency for the same armature rotation rate. Sorry for the confusion.

The second one just uses space more efficiently and it offers more variability in connecting the three coil pairs (star or delta or just using one or two phases).

So the first diagram is indeed simplified but it's not oversimplified. I.e. it'd generate 3 phase sine voltages but there are some reasons why in practice the second configuration is prefered.

Not the answer you're looking for? Browse other questions tagged electromagnetism three-phase induction or ask your own question.