How to calculate this resistor MOSFET circuit?

Here are the given values:

Here is what is needed: 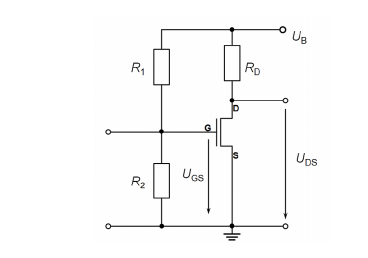 The schematic shows an Enhancement mode Nch. The circuit exceeds the typical threshold for Vgs(th) = 0.5~4V putting the drain into the "linear" mode where linear and saturated modes are opposite to BJT's. So BJT's Vce drops <1V when saturated while FET's drop in voltage to a low RdsOn when in "linear mode".

Since you calculated correctly Rload to be 240, much higher than typical RdsOn <10, your conclusion is also correct.

Thus 240 Ohms is the sum of Rd and RdsOn

There is no way the drain can be 5V.

Here a Nch MOSFET is shown with some arbitrary Drain current for Vgs above Vth on the x axis. and thus is a linear voltage controlled resistor until that resistance curve saturates or flattens out.

Rds will pull down the 240 Ohms by the some unknown amount based on the rated RdsOn @Vgs=6V If RdsOn was 10 Ohms Vd= 0.5V

Again this x axis is the Vgs-Vth difference. 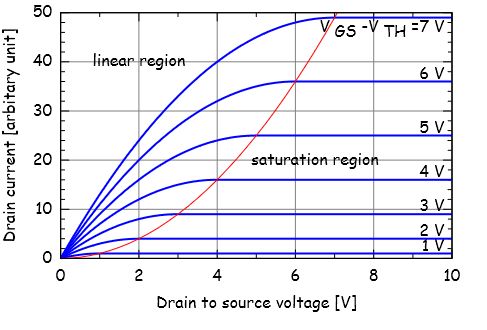 Not the answer you're looking for? Browse other questions tagged mosfet resistors voltage-divider homework or ask your own question.

3
Did I calculate this MOSFET circuit correctly?

2
Circuit Nodal Voltage
0
Common-Source MOSFET Amplifier Schematic & Analysis
2
What will be the value of saturation current in this series NMOS/PMOS circuit?
4
How to solve this diode resistor circuit?
0
How do I solve this network of diodes?
3
Did I calculate this MOSFET circuit correctly?
1
Find the voltage drop across each resistor in the circuit
3
Output resistance of MOSFET circuit
0
Trouble deriving/understanding time constant
0
Formula to calc Id of this IRF3205 in the linear region from this specific voltage measure point