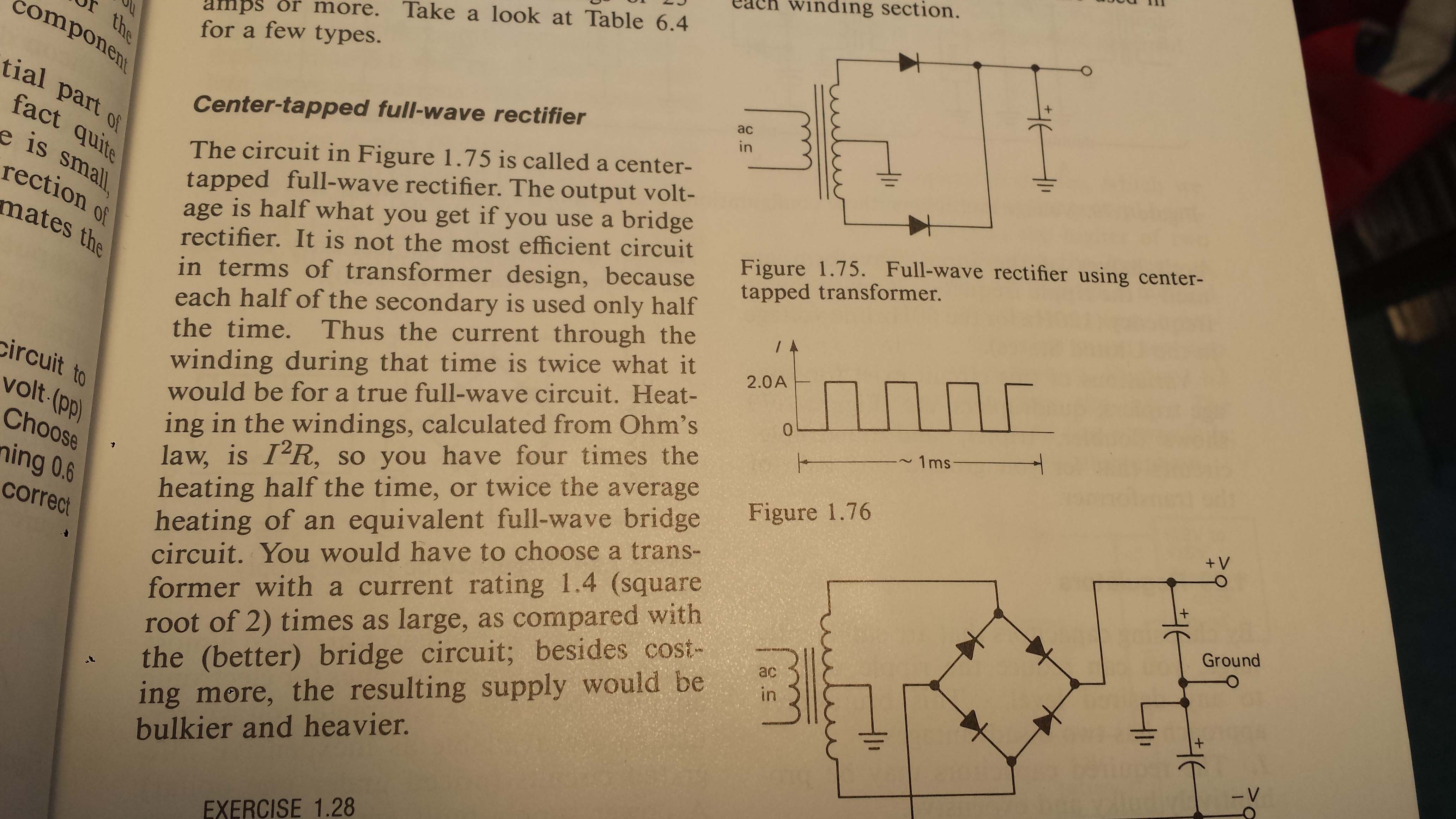 In the above image, I'm trying to understand the statement that says this is center tapped transformer is less efficient and the current is twice what it would be for a true full-wave circuit. I also have an LPSpice and inductor quesiton later? I did not print the full wave bridge circuit that was on the prior page. In that circuit, it looked like the transformer was 1 to 1 (not step up or down). In figure 1.75, the center tapped transformer looks like it steps the voltage up 2X, except that each half the voltage is 1/2. If this is so, the voltage would be the same as the non stepped up transformer in the full wave bridge circuit that the book might have refered to (and I tried to model below). I was trying to use ltspice to see current and voltage to get a sense of why it is less efficient, but didn't see that? 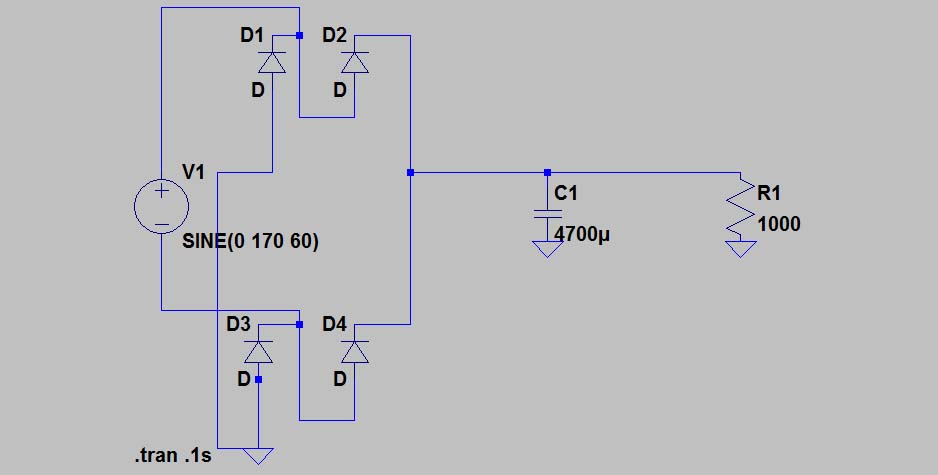 In this LTspice sim, i did not show the transformer that looks to be 1 - 1 . I spent time testing voltages. When I test the voltage on either side of V1, it does not ever go negative, is this because of the diodes? If so, what happens, when V1 tries to go negative and instead goes positive? 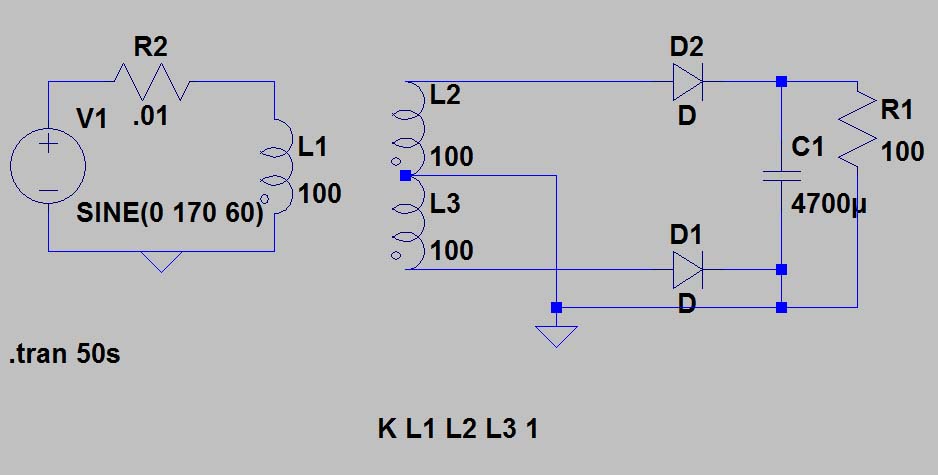 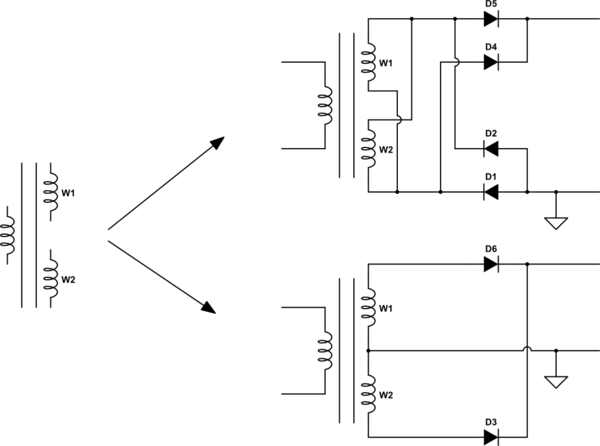 Use a transformer that can be set up to give the same output voltage in either the full wave bridge or center-tapped full wave configurations. It is illustrated above where I drew only the necessary details for showing the differences. It is under this context, which you start with the same equivalent transformer, that the explanation you posted is applicable and makes the most sense.

In the center-tapped configuration, either W1 or W2 conducts every other half cycle, but never the same time. Therefore only one winding supplies the total output current during a half cycle.

Let's use a solid example. The following is from a datasheet I got from Digikey, it is the first one in the table when I chose power transformer. http://catalog.triadmagnetics.com/Asset/FS12-090-C2.pdf

The two output split windings can be used by connecting them in series -- pin 5 and 8 as output, pin 6 and 7 tied together. Then used in a full-wave center-tapped configuration with pin 6&7 going to ground. The output voltage would be rectified from 6.3Vrms. The current limit would be 0.09A for this comparison.

The two output windings can be used by connecting them in parallel -- pin 5 & 7 together, and pin 6 & 8 together. Then used in a full-wave bridge. The output voltage would also be rectified from 6.3Vrms. When used with a current of 0.09A, the current through each windings is only half of the specification and therefore has half the total conducting loss as comparison (this is the point of the pasted explanations in the OP). Alternatively, the output current limit can be as high as 0.18A all within the transformer specifications.

For the full-wave centered tapped configuration, it is possible to cheat and draw more than 0.09A because the transformer is rated for 1.1VA (approximately 6.3V x 0.18A). But the transformer specifications would no longer be 100% applicable because the 0.09A current limit through a winding in the datasheet would be exceeded and one would need to apply some extrapolations. For example, the 25% typ voltage regulation would probably be exceeded.

So here is the real big disadvantage of the center tapped configuration in this real component example -- you either operate the transformer at half the rated power while staying all within spec, or you can operate the transformer at closer to the rated power with extra power loss and some specifications would be exceeded and required extrapolations.

But the real reason for the center tapped configuration is to rectify both a positive and negative 6.3Vrms rectified voltage from it. With this transformer, the within spec output limits would be 0.09A for positive and 0.09A for negative.

It is also possible to connect the two windings in series -- use pin 5 and 8 as outputs, pin 6 & 7 together and go nowhere. Put a bridge rectifier on pin 5 and 8. Then the output would be rectified from 12.6Vrms and current spec would be 0.09A max.

The text does a great job of explaining things. Try the following in LTSpice:

(No need for inductors for this test.)

How, make sure that \$R_1\$ and \$R_2\$ are exactly the same value. You will want the exact same current flowing through these two resistors so that the exact same driving voltage appears across them. That's your load and you want the same power dissipated in the load in both example cases. So \$R_1=R_2\$.

You need to select diodes that are appropriate for the current load. Whatever they are, use the same ones across the board.

Once you've done that much, you have the exact same load in both circuits and you can now see the differences.

Check out the current pulses coming from all four voltage sources and the timing of them. Look at the peak values and compare them. Do you find them somewhat close to what is talked about in the text?

Where did the negative part of the wave go?

Your final circuit is wrong - the two cathodes should join i.e. D1 cathode should go to the top of the capacitor. At the moment you are shorting out the transformer on half cycles.

Not the answer you're looking for? Browse other questions tagged ac transformer inductor ltspice or ask your own question.