I'm trying to understand current mirror circuits and I've been reading this article. I'm unable to understand the input part of the circuit where the author says "Producing the opposite where the collector current controls the VBE is not possible in the conventional use of the device as a common emitter amplifier. The solution is to incorporate negative feedback." (refer to image).

I do not understand how the feedback is actually 'controlling' base to emitter voltage (Vbe).

From what I understand, the Base-Emitter junction is just like a diode with a fixed ~0.7V across it. So, no matter what current you give to the base through the feedback connection, won't Vbe be equal to ~0.7 volts? How are we actually controlling the output(Vbe) here?

There are many different BJT models, with varying degrees of usefulness in varying circumstances. (See SIDEBAR at bottom.) I'm not going to delve into any of that as it's not necessary in this case. A nice simplification is quite sufficient for your use here.

The important thing to note here is that this equation expresses a relationship between \$V_\text{BE}\$ and \$I_\text{C}\$. A BJT is a voltage-controlled device, as a FET is. (The big difference is that in the BJT case you need to keep supplying additional current into the base in order to deal with recombination. See my explanation here, regarding a PNP, for some details.) This equation works both ways. If you can set \$I_\text{C}\$, then you also know \$V_\text{BE}\$ (see a derivation here):

(If you are interested in what the LambertW function is [how it is defined] and in seeing a fully worked example on how to apply it to solving problems like these, then see: Differential and Multistage Amplifiers(BJT).)

However, you could also just make a reasoned assumption about \$V_\text{BE}\$ to start, stick that in to get a refined value and then use that refined value one more time and you'd be close enough for all intents and purposes.

So let's get down to the business of the negative feedback, now. Let's start with the schematic: 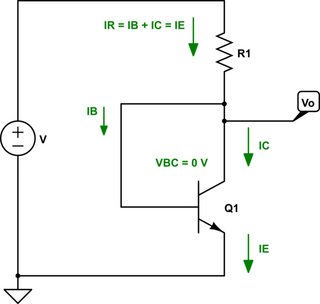 The equation is pretty simple:

In effect, \$R_1\$ (as arranged here) is providing negative feedback.

Similar arguments apply to the MOSFET case, too, though the equations and unaccounted errors and thermal behaviors are different.

SIDEBAR: These models include Ebers-Moll (three 1st-level DC models that are all equivalent and described in my answer elsewhere on EE.SE, plus follow-on modifications to Ebers-Moll in order to handle everything from lead resistance to base width modulation effects, to Gummel-Poon (provides a unified view of the Early and Late Effects and more, as well) and further modifications, then to VBIC, and still later ones which are used by FAB personnel for IC designs. All useful BJT models are based upon some kind of understanding of the the physics involved. But even that physics, itself, is yet another set of simplifications about a deeper reality. For example, even the most thorough attempts will incorporate an assumed gas cloud model of conduction band electrons, ideas of mean free path, and so on. The reality is vastly more complex than that. But once you move fully in that direction, you leave behind electronics entirely and have moved into profound physics.

To explain a circuit in such a way that the reader understands it, we need first to grasp the basic ideas on which it is built... "to see the forest for the trees". This will allow us not only to describe accurately HOW the circuit is made, but also WHY it is made exactly that way...

That is why, the next powerful idea is to implement the "inverting current buffer" by cascading two opposite (current-to-voltage and voltage-to-current) converters. They are deliberately made non-linear (logarithmic and antilogarithmic). As a result, the input voltage (across the circuit input) is compressed almost to zero while the output voltage (across the load) can be expanded up to the supply voltage.

A diode can act as the input current-to-voltage converter and the transistor - as the output voltage-to-current converter. But these elements are not sufficiently identical. So, the next powerful idea is to implement both converters with the same element - direct and "reversed". We have two choices - to make a diode act as a transistor, or to make a transistor act as a diode. It turns out the latter is possible by means of the ubiquitous negative feedback. It can make the transistor adjusts its input base-emitter voltage so that to provide the desired collector current. Let's see how the negative feedback is implemented...

In an emitter follower, the negative feedback exists due to the internal connection between the input base-emitter and output collector-emitter junctions. So, if we change the emitter current as an input quantity, the transistor accordingly adjusts its base-emitter voltage as an output quantity. This technique is widely used to bias emitter-coupled circuits, differential amplifiers, op-amp stages...

But in the common-emitter stage we cannot simply pass the input current through the collector-emitter junction since the transistor cannot "sense" this "intervention" and will not react. It can do it if we connect its base to the collector. Thus the input base-emitter junction is connected in parallel to the output collector-emitter junction and this "circuit" behaves as a voltage stabilizer with negative feedback. When we change the collector current as an input quantity, this "system" will react to our intervention by adequate change of its input base-emitter voltage as an output quantity... as though the transistor is reversed.

Here are some related links:

What is the idea of the current mirror with two emitter resistors? - an RG question

What is the basic idea behind the BJT current mirror? Is it a reversible device and why? - an RG question

Can we "reverse" a BJT by passing the input current through the emitter and taking the base-emitter voltage as an output? - an RG question

Can we "reverse" a BJT by injecting the input current into the collector and taking the base-emitter voltage as an output? - an RG question

Chapter 11: The Current Mirror - the ADI Wiki article mentioned in the beginning

Not the answer you're looking for? Browse other questions tagged transistors bjt feedback negative current-mirror or ask your own question.

9
Why is Vbc absent from bjt equations?
5
Differential and Multistage Amplifiers(BJT)
2
Why Ic increases with increase in Ib?
0
How is the equation for Compliance voltage?
2
What is the real problem with fixed point bias circuit?

1
How does a change in base current affect collector current once the transistor is biased
2
Bipolar transistor as a switch
4
What is the precise definition of forward and reverse bias for a P-N junction?
1
Current mirror with different emitter resistors
3
Confusion about a basic BJT current mirror
0
Transistor as a Switch in Cutoff and Saturation
6
Base Current vs Emitter Base voltage
0
How is the Collector-Base region reverse biased in Common Collector configuration of BJT?
0
Can we present the current-driven BJT as two cascaded non-linear converters?
3
Current mirror: is there a name for this NPN-PNP pair, and how does it work?