When is it required or permitted to sample below Nyquist rate

I have searched past questions and answers on this platform but none answers this question. A prof said it is possible to sample below Nyquist rate under certain conditions. I will like to know, first, if it is possible to do this, if so, when?

First of all, let's get rid of the Nyquist rate misconception.

People are usually taught that the minimum sampling frequency needs to be twice the frequency of the highest frequency in the signal. This is completely false!

So in the picture here, the sampling frequency needs to be at least 2*(Fh-Fl) in order to get the spectrum.

The area between the 0 and Fs/2 is the so-called first Nyquist zone. This is the area where we're doing the "traditional" sampling. Next take a look at the area between the Fs/2 and Fs. This is the second Nyquist zone. If we have any signals in this area, their spectrum will be sampled and its spectrum will be flipped, that is to say, the high and the low frequencies will be inverted. Next, we have the third Nyquist zone, between the Fs and 3Fs/2. Signals here, when sampled, will look as if they came from the first zone and their spectrum will be normal. The same goes for all the other zones, with the rule being that the spectrum of odd-numbered zones is normal and the spectrum of even-numbered zones is inverted.

Now this goes against the "traditional" rules about aliasing, since aliasing is usually taught as some evil monster coming to eat your signals away and that you have to use the low-pass anti-aliasing filters to get rid of it. In real life, this isn't how things really work. The anti-aliasing filters can't actually prevent aliasing, they just bring it down to the level where it doesn't matter any more.
What we really want to do instead is to eliminate any strong signal from Nyquist zones that are not of interest and let through the signals from the Nyquist zone that is of interest to us. If we're in the first zone, then a low-pass filter is fine, but for all the other zones, we need a band-pas filter that will allow us to get the useful signals from that zone and remove junk that we don't need that's coming from the other zones.

So let's take a look at this example:

Here we have a signal in the third Nyquist zone that is being let through by a band-pass filter. Our ADC will need to only have the sampling frequency of twice the bandwidth of the signal to reconstruct it, but we always need to keep in mind that this is actually a signal from the third zone, when we need to calculate the frequencies inside of our signal. This procedure is often called bandpass sampling or undersampling.

Now, after all this exposition, to answer your question when:
Well, let's take a look at radio, perhaps something in the microwave spectrum, maybe WiFi. A typical old-style WiFi channel might have 20 MHz of bandwidth, but the carrier frequency would be around 2.4 GHz. So, if we take our naive approach to sampling the signal directly, we'd need a 5 GHz ADC to see our signal, even though we're only interested in particular 20 MHz of spectrum. A 5 GHz analog to digital converter is something that is very complicated and expensive and it requires very complicated and expensive design too. On the other hand, a 40 MHz ADC is something that is not as "magical" as a 5 GHz ADC.
One thing that needs to be kept in mind is that, although we could in theory capture out signal with a 40 MHz ADC, we'd need very sharp anti-aliasing filters, so in practice we don't really want to run the sampling frequency too close to the bandwidth. Another thing that's also overlooked is that the circuitry of a real-life ADC behaves as a filter on its own. The filtering effects of an ADC need to be taken into account when doing band-pass sampling. Quite often, there are special ADCs with bandwidths much wider than the sampling rate that are specifically designed with band-pass sampling in mind.

Finally, there's the other side of the story as well called compressed sensing. I'm not an expert in that, and it's something that's still a bit new, but the basic idea is that if certain assumptions are fulfilled (such as that the spectrum is sparse), we can sample at frequencies even lower than twice the bandwidth of the signal.

So, many people, including professors, are confused about what Nyquist rate is:

What that means is that for real-valued signals and real-valued sampling, the sampling rate must be more than two times the bandwidth of the analog signal.

That means that with a 6 kHz sampling rate, you can get a 100% representation of any 3 kHz-wide band.

It does not mean that the sampling rate needs to be twice the highest frequency in the signal. If your 3 kHz, for example, are the band between 9 kHz and 12 kHz, you do not have to sample at 2·12 kHz = 24 kHz; 6 kHz is totally enough to unambigously represent the signal digitally. You would still need to know that your 3 kHz were centered around 10.5 kHz, if you wanted to later relate it to other signals, but usually, that doesn't matter.

We call this technique undersampling, and it works beautifully, and is a 100% standard technique with many technical applications. All you need to be sure is that everything your ADC (analog-to-digital converter) sees is bandlimited to half its sampling rate – that means, in the aforementioned example, that you must be sure that there's no signal below 9 kHz and no signal above 12 kHz.

Notice that this is true for real-valued sampling only. If you used things like IQ demodulators (also known as direct conversion mixers, quadrature demodulators) to give you complex, equivalent baseband, you get two streams of synchronous samples. In that case, the factor of 2 falls away. This is a very important aspect for software defined radio.

If you're in the later parts of a DSP course, your professor might have hinted at the fact that you can implement things like rational resamplers, where you'd normally have to upsample by a factor of M, then filter to erase all images (filter runs at input rate · M) , then filter to avoid all aliases (filter runs at input rate · M) before downsampling by N, with a single filter that effectively runs at 1/N of the input rate – which is actually sub-Nyquist sampling. But that would basically be one of the highlights of a polyphase/multirate systems lecture, and I doubt he'd put that out there in a beginner's course – it's just too confusing.

Never. But you need to make sure you understand exactly what the "Nyquist rate" actually is.

Nyquist stated that you you can reconstruct the signal as long it is sampled at a rate that is more than twice the bandwidth of the signal. That bandwidth may or may not start at DC, but many sources on this topic assume that it always does, and that the highest frequency component of the signal determines the Nyquist rate.

A prof said it is possible to sample below Nyquist rate under certain conditions.

If all you are interested in is calculating the RMS value of a waveform then you can sample below nyquist: -

The blue waveform is also a sinewave having the same RMS value as the original. What you should avoid is this: - 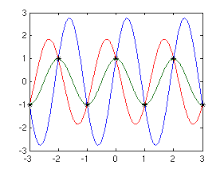 Exactly two sampes are taken every cycle and it's impossible to know if the aliased signal was in fact the red waveform or the green waveform.

The nyquist criterion tells you how often you need to sample in order to reconstruct a signal that is band limited. However, no physical signals are band limited, this is just an idealization. Other schemes will work for sampling other idealized signals. By giving you a-priori information about a signal, ( that it is band limited), Nyquist tells you how to reconstruct the entire signal from a few samples. If I give you different a-priori information, you can do better than nyquist. Here is an example: my idealized signals are piece wise linear. One only needs to sample these signals at their inflection points: many fewer samples than one neeeds for band limited signals. To reconstruct the whole signal, draw straight lines between the sample points. You can call this the "Linequist" criterion.:)

A periodic signal can be sampled by using sub-Nyquist sampling rate. This is well exploited in oscilloscopes. There one sample is saved for each signal repetition, but at a different position of the period. Need 512 samples? then 512 full perions of the signal is needed.

Its easy to see that a stationary sinewave can be captured this way. But those 512 samples must cover the signal. That's true if 256th and upper harmonics can be considered as zeros.

This is sometimes intentionally done, eg in a sampling oscilloscope (not the same as a DSO, though some DSOs also are sampling - but a sampling oscilloscope can be an entirely analog device and they have been built since the 1950s), to deal with periodic signals that are too high in frequency to be economic to amplify or otherwise treat with linear circuitry - not many oscilloscope CRTs exist(ed) that can deal with a 1GHz signal raw (some do exist!), however 1GHz was easy to deal with by undersampling even with 1960s technology. In the end, the whole system behaves similar (not identical) to a heterodyning receiver. While there is no continous wave high frequency LO, there is still a very high frequency component hidden (and used) in the sampling clock used: It needs to be an extremely fast risetime pulse and/or whatever is used as a sampling gate needs to react to it in a fast, abrupt manner.

Obviously, a non-periodic signal cannot be examined that way, and a signal with added much lower frequency components can be thoroughly misrepresented and/or misinterpreted.

I think that what [rackandboneman] said is consistent with the professor's intention. The 'certain condition' would be that the original signal should be periodic. 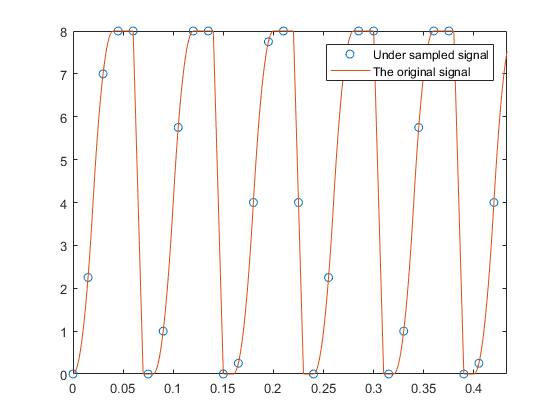 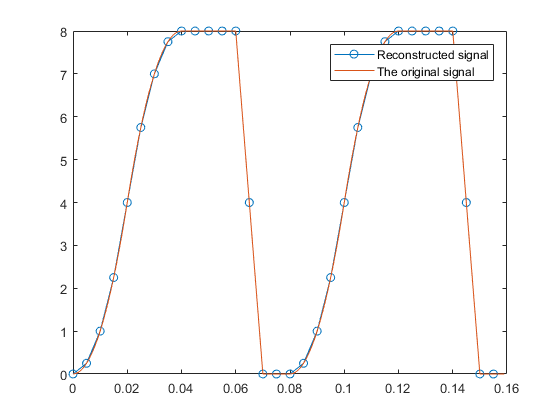 Whether a given sample rate is adequate will depend upon whether there exist two frequencies whose content would need to be distinguished, but cannot.

If one is e.g. only concerned about signals in the range 700-800Hz, the input will be devoid of content below 300Hz or above 1200, and the presence of other signals will not cause clipping, a 1000Hz sample rate would be adequate without any pre-filtering, despite the presence of content whose total bandwidth is 900Hz. Content in the range 300Hz-700Hz would be indistinguishable from content in the range 800Hz-1200Hz, but if one doesn't care about any such content that wouldn't matter.

3
How can I find a specific frequency after doing FFT?
3
Nyquist sampling rate with real and imaginary aliasing
2
Understanding sampling rate and frequency of logic analysers
4
Relationship of FFT Size, Sampling Rate and Buffer Size
18
Why do digital scopes sample signals at a higher frequency than required by the sampling theorem?
0
When reading the digital wave from a DAQ, should I be getting the same wave I'm generating to it?
0
How to find gain and phase crossover from a Nyquist plot?
2
Nyquist theory - Control system - Stability
9
Shannon-Nyquist - only for repeating signals?