Can I use a standard latching relay to switch AC for a power socket?

I'd like to create a circuit that opens and closes a relay, effectively turning the socket on and off. I can handle the logic and the DC, but I'm less comfortable dealing with AC.

I prefer a latching relay, as I only want to apply power to activate / deactivate the socket: I don't want the logic circuit to be leeching power just to keep the socket enabled.

I've found a relay I think I'd like to use.

It is rated at 16A and is through-hole, but it's small and I worry it can't carry the current. If it's rated at 16A, does that mean it can handle 16A continuous? I'm not seeing any thermal properties in the datasheet.

I'd like to put a fuse in-line, but I've only found surface-mount fuses. I'd like a resettable fuse, if possible. If not, does this look like it would work? Any suggestions on overcurrent protection?

I plan on using a 2oz copper PCB. According to this calculator online, I would need a trace width of 271 mils on the top or bottom layer (20C Ambient +10C rise). Am I reading that correctly? If so, could I use the top and bottom layers simultaneously? 8A on one layer is only 104 mils, which seems a lot more manageable.

Lastly, I'm thinking quickconnect terminals might be preferred over the standard terminal blocks with screws. I can't seem to find any I think would survive being jammed back into a gang box, and the quick connect terminals seem like they'd work fine AND be cheap to boot.

I know I need to keep any DC logic 6mm from any AC power planes. Anything else I might be missing?

The datasheet clearly says, in the "Contacts" chapter:

And there is no mention of a max switching power limit in the table. This is also confirmed by the graph "Maximum Switching Power" which shows a flat line at 16A, up to 250VAC and then it drops straight to 0.

So, yes, really, there is no possible doubt: This relay can switch 16A continuous. Note that, for relays of that size, 16A is not that huge.

Regarding thermal properties: they are often not clearly stated in the datasheets for those kind of relays. You just have to trust the manufacturer. It will certainly get hotter, but if that was 100° hotter, they would clearly mention it. Again, take it for granted it is rated up to 85°C operation, at full load. In the "Correct Use" chapter, they mention risk of temperature rise, but when the coil is activated for too long. They don't say anything about the contact, so it is fine.

Just for the fun, we could calculate the maximum dissipated power based on the given max contact resistance (100mΩ): that would be RI²: 0.1*16² = 25W. Of course, this seems impossible for a relay of that size. This is because the given max resistance is very conservative and measured with 1 A applied at 5 VDC (see note 1 on page 3 in datasheet). So the power will certainly be much less than that in your case, and you can safely assume that it will be fine.

The fuse you selected seems fine. If you don't like the fact it is SMT, there are resettable fuses available in through-hole, but, often, they have hold current specified at 15A, not 16A.

You are estimating the trace width correctly. But 10°C is very conservative for such a high-current application. You can certainly allow for more temperature rise on the trace, especially if the trace is short. Now, I wouldn't rely on using both top and bottom layers to reduce trace width, because the copper layer properties may be different on top and bottom (especially if the route is not exactly the same), and the current may not be equally shared. I could use two trace to lower the temperature rise, but I would still ensure that, if all current goes through only one trace, all requirements are still met.

Another solution (if it is a one-off) is thickening the trace with added solder all along it. This requires, of course, to design the trace without solder mask on the top of it, so this eventually means having more clearance between the two AC lines to eliminate creepage risk.

@Uwe raised a very good point regarding inrush current. Depending on your load, a much higher current than nominal may be required for a short time, when the load gets powered. This is the case for a lot of loads (SMPS supplies / big mains transformers / most lightnings / ...).

For the PCB trace, it isn't much of a problem, since it is for a short time only. For the fuse, this must be taken into account, but if you know your load, the fuse time/current curves on the datasheet will tell you if it works. For the relay, however, this may be a bigger problem. The datasheet of the relay you chose didn't mention anything about inrush, so you can't expect it to work reliably if your load creates singificant inrush. Here is an example of another, similarily speced latching relay, that clearly specifies inrush current: Panasonic ADW1.

Here is also a TE app note about relay contact life, that has interesting information regarding inrush.

Coincidentally, i have used the same relay in a recent remote AC switch. These are nice relays. However as a side note, just remember that they have 2 controllable configurations for the latching action. One being a single coil, requiring two IO pins. You need to flip the polarity much like a H bridge to control it. The other is a 3 pin version with effectively 2 coils: one for arming and one for disarming. The later is easier to control as it does not require a H bridge!

Also be on the look out for required isolation slots: The size of this relay is such that you might find it ruins the isolation scheme between your low voltage DC and high voltage analog front end (if any). This is because you need to keep the distance between the AC terminal block and relay contacts as short as possible to not ruin the 16A rating and minimise trace resistance. This consequently means your low voltage DC contacts will be closer to the mains, requiring additional isolation. Consider this example: 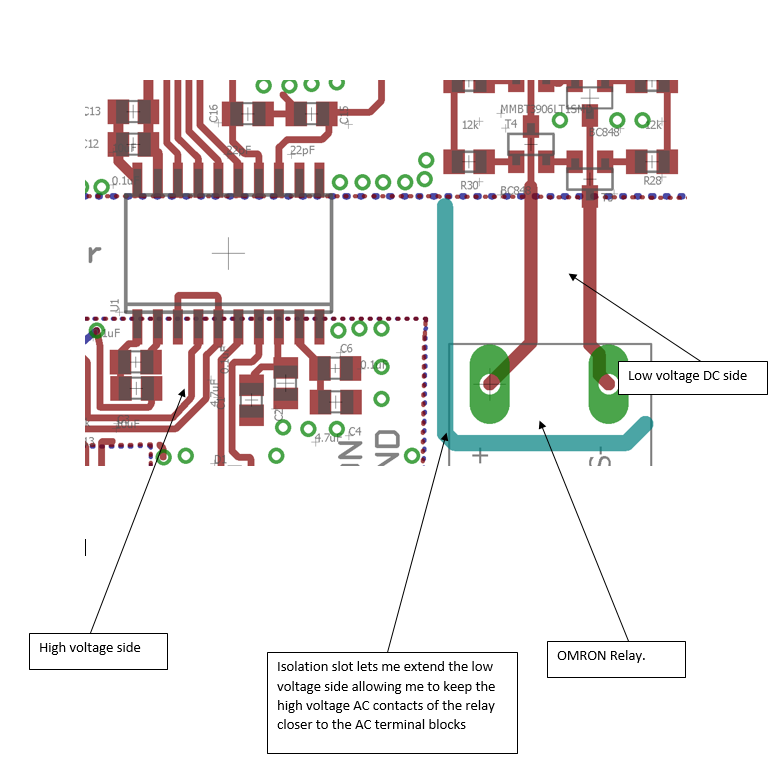 Not the answer you're looking for? Browse other questions tagged relay mains home-automation or ask your own question.