Can I connect high power LEDs in parallel without resistor?

I see lots of people connecting high power LEDs in parallel to a single power supply (constant current). Some of them have powerful knowledge about electronics (example). So, is it something special about high power LEDs so they can be connected in parallel without resistor?

It depends on what your design outcome is. No electronic components are created equal, they all have tolerances from manufacturing that make them different. If the brightness of the LED's is matched then the current needs to be matched.

Example 1 and Example 3: The current through one resistor feeds two LED's, one LED has a slightly different I-V curve, it consumes more current and is brighter. The same thing happens in Example 3, it just has a constant current source.

Example 2: The brightness is better matched because either LED is getting a similar current. The currents won't be exactly the same however because there are still differences in the LED's

Example 4: This is the best way because the current has to be equal through both LED's, you will get the best brightness matching. 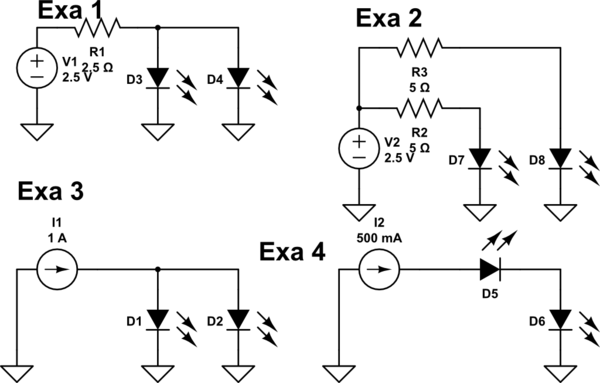 No, there's nothing special about high-power LEDs in particular that makes this safe. There's no guarantee that parallel strings of LEDs will share current equally to begin with. The temperature coefficient for the junction voltage is generally negative (on the order of -3 mV/K to -10 mV/K), so if one LED starts to warm up from excessive current, it will draw even more current (stealing it from the other string(s)), compounding the problem and leading to thermal runaway, at least until that LED reaches its peak current limit and fails. After that (when using a current source rather than a voltage source), the other string(s) will by definition be running at greater than their current rating and will fail quickly as well.

Warning: Do not confuse "makes you tube videos" with "powerful knowledge".
A video maker may or may not know their stuff.

In his video, the 3 series LEDs at constant current are driven correctly.

When he parallels two strings with 3 LEDs per string he is relying on them having very similar Vf (forward voltage) in each string at Isupply/2 so that the current will share equally. In many cases this is "close enough" to what happens for it to work OK BUT it also may result in very uneven current distribution.

LED Vfs of a given type & batch tend to cluster around an average voltage with most typically within 0.1 - 0.2V from the average. You can get substantial outliers. Low quality LEDs tend to have higher spreads of Vf.
[I had one type of LED made by a very competent manufacturer where production sampling over very large quantities showed Vf = 2.95V +/- 0.05V for about 95% of the production.]

If the 3 x Vf's of one string are substantially different from the Vf of the other string then the low Vf string will take more current - possibly MUCH more.

Also, if one LED ever fails open circuit (as does happen)(as 12Lapointep noted in a comment) then all the current will be taken by the remaining string - and LED current will double. Vf at 2 x current will rise so power will more than double. Whether the LEDs die rapidly in this scenario depends on various factors but, at best, their lifetimes will be shortened - probably substantially.

Current driving each string separately is "not too hard" and may not be overly expensive and is well worth doing.

If you ignore the LED open-circuit failure condition, improved current balance may be obtained by adding a small series resistor in each string. One volt drop is usually very adequate and even a few tenths of a volt can help greatly.
What happens is if one string has lower total VF then it will draw more current and the resistors V drop (= I x R) will rise, limiting Vf rise on the actual LEDs, while the high Vf string that has less current will have lower IR drop across its resistor, so lower LED Vf due to lower current.
The overall effect is that, compared to the no-resistor arrangement, the low Vf string will draw reduced current and the high Vf string will draw more current.
Full balance can never be achieved this way, but the result is a great improvement over the no-resistor arrangement.

Not the answer you're looking for? Browse other questions tagged led power current parallel or ask your own question.