I recently read part of this 1986 "paper", Theory of Wireless Power by Eric Dollard. From what I understood, Tesla found the resonant frequency at which the energies of the electrostatic field and the magnetic field were equal.

In the above diagram, a virtual ground is established at one end of the terminal and the coil becomes a mono-polar transmitter.

With this set-up, can you transmit electricity through the ground?

Tesla's system uses two wire transmission The ground is the second wire. The first wire in Teslas system was capacitive coupling thru the air. Transmission was directly 2 wire conductive as a huge spark, if the generated voltage was high enough to cause discharges thru the air.

In latter mythlike stories the ionosphere could act as the extension of that capacitor.

As an answer to your question: Transfer through the ground without another wire is possible in following ways:

*)only an assumption, not based on calculations or proven sources

No radiowaves thought here. Tesla claimed "This system is not derived from Hertz's. Actually he was right and wrong.

Wrong: he couldn't avoid radio waves to be born as a side product. They get the birth as soon as there exists suddent changes in E or H field intensities.

Right: The main effect was caused by fluctuating local, nonpropagating fields - or as a radio engineer says: caused by reactive nearfield. See the ADDENDUM!

In Tesla's experimental system the block "Supply of energy" was the spark gap output of a spark iductor. The transformer was connected to the ends of the spark gap thru a smallish capacitor (not drawn) to allow the sparks to develop without a short circuit.

Every time when a spark hits in "the energy source" the transformer gets a sharp impulse of several thousand volts.

Transformer is loosely connected - the coils had no common high permeability core, they stood only near enough. Thus the secondary coil of the transformer and the output terminals formed a reasonably high Q resonant LC circuit.

Output terminals (earth and the big "virtual ground terminal + its supply wire were a big open capcitor and all those amazing super high voltage effects in the air actually happened in the capcitor of the resonant circuit.

As said, the looseness of the transformed let the output side to have low resonant losses. The inputted sharp spikes have a substantial amount of energy in the resonant bandwidth of the output circuit. That causes the resonant AC voltage in the output circuit to gradually build up. It could easily be hundreds of thousands, even a million volts. That was noticeable even several meters away of the output terminals. But the AC fields stayed local and weakened as the distance was longer. That was not easy to notice in a room.

NOTE: The output AC voltage grew until discharges, the stream back to the supply and escaped radiowave energy were in balance with the total available input power.

But that's not true. The high intensity AC field could build up only if no remarkable losses existed. So-the power in the world wide electricity system would have been unavailable for use - as a wall socket that's not allowed to use.

Unipolar one wire transmission systems are constructed (even no earth is needed in the transmission job). Examples: Goubau line, metallic wavequide. But these systems must be considered as structures where a radiowave propagates quided by a single, maybe a long one piece of conducting material. Normally we use two wires as in twisted pair or coaxial cable. An analysis shows that metal and their surface current quides the radiowave that actually stays outside. In coaxial cable the radiowave propagates in the insulating layer between the conductors, but not inside the metal parts.

ADDENDUM: Vicious reactive nearfield surrounds radio transmitting antennas. Especially forceful it is when antenna is poorly designed and need a heavy tuning circuit to head the already back to the transmitter walking radiowave again to the antenna. Every radio amateur who has experienced with homemade HF antennas has smellt and felt his skin burning after touching some metal near that bad antenna.

Only extremely low frequencies can travel far through earth, this is how they communicate with submarines. 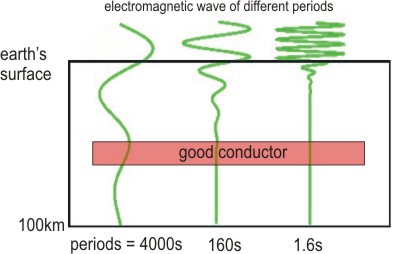 in a field called Magnetotellurics

From Electrical Characteristics of the Surface of the Earth 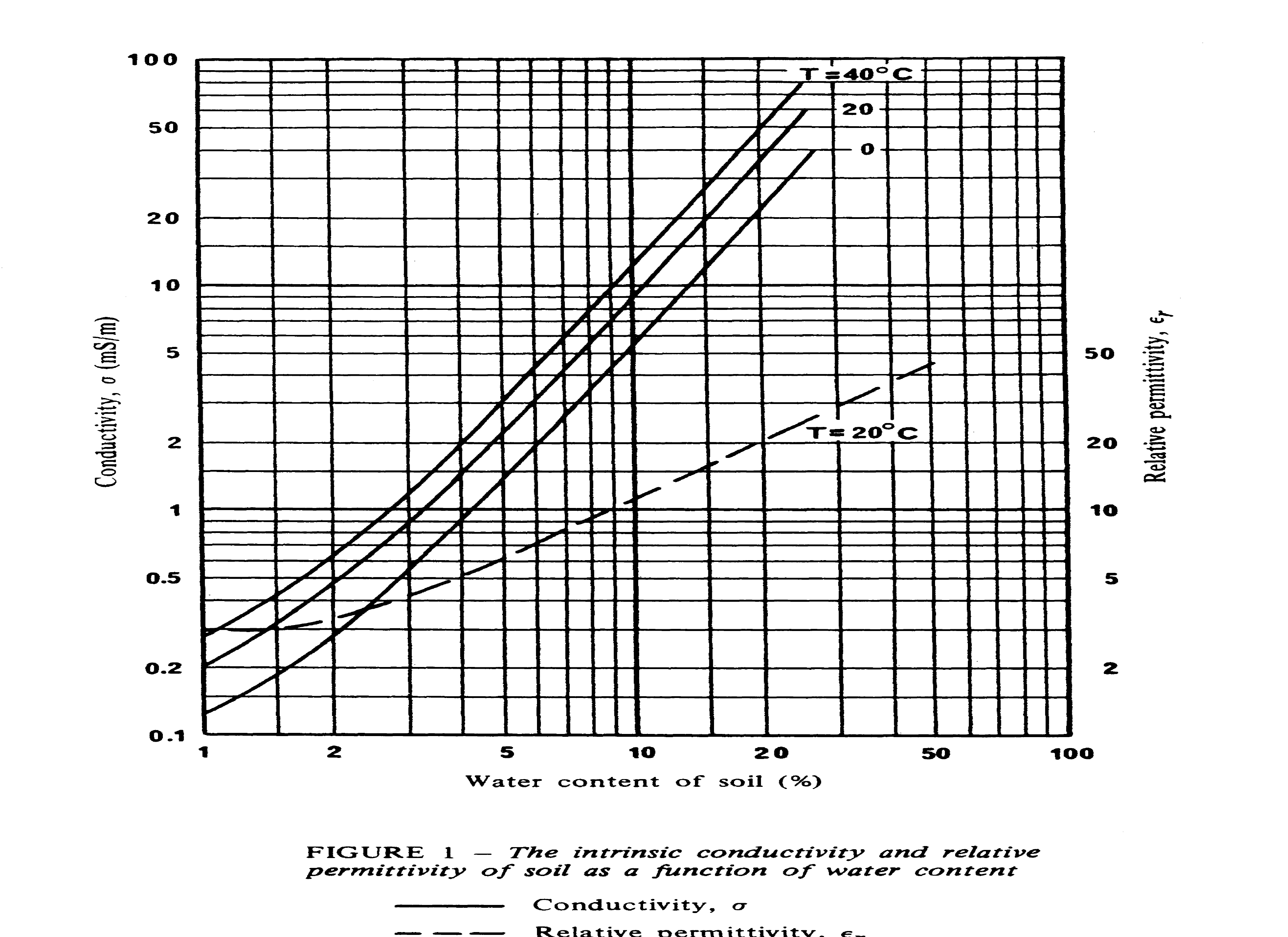 So the skin depth for different frequencies varies, the skin depth is never more than ~3m for a 1Hz signal anything higher than that doesn't go far (only in the best of soils do 10Mhz signals travel 1m before being attenuated). 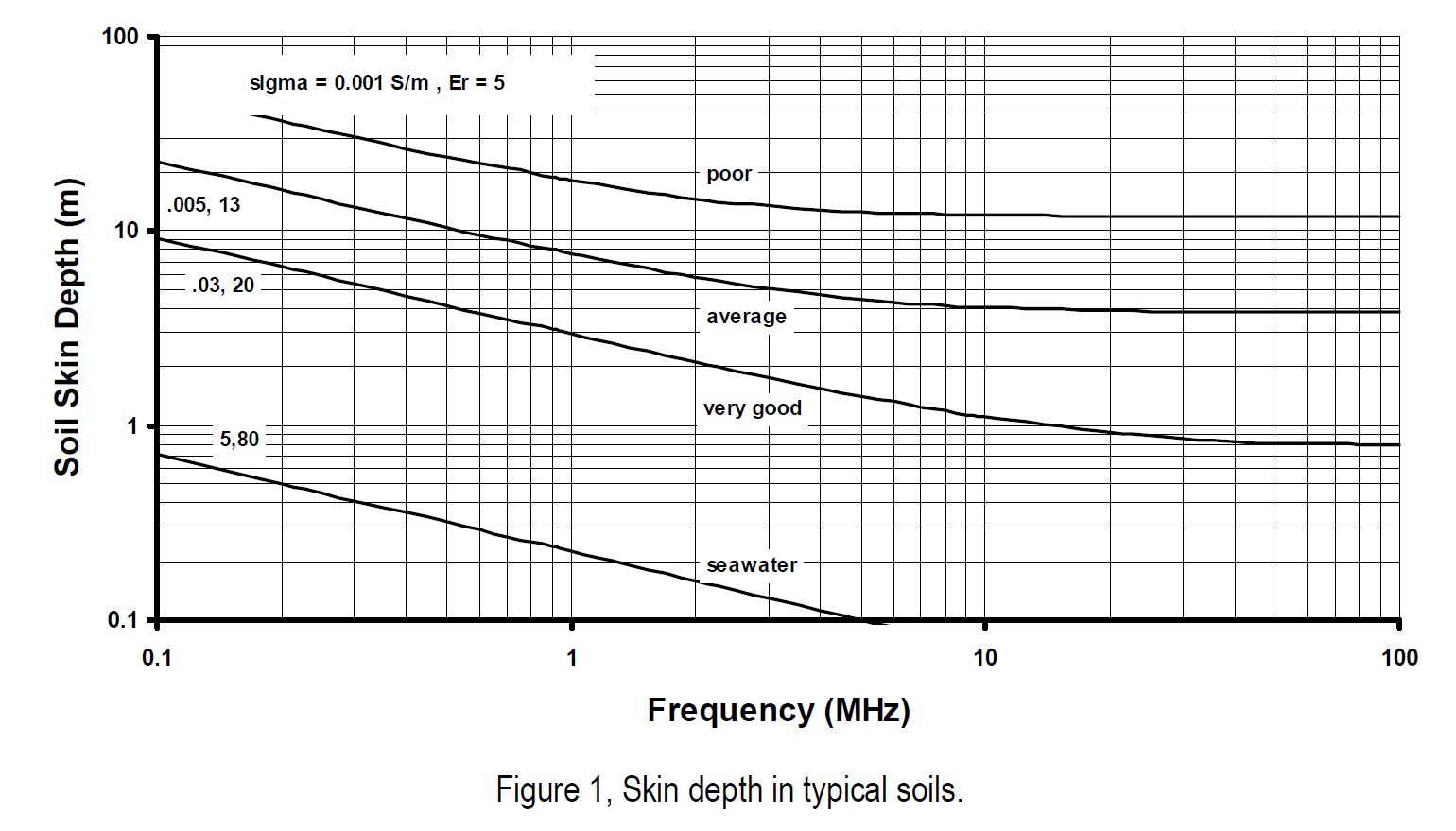 Not the answer you're looking for? Browse other questions tagged wireless power-engineering or ask your own question.

9
How would an electric company detect wireless theft of electricity?
2
How efficient is wireless electricity compared to wired electricity?
8
Why is the earth a viable return path for power distribution?
1
Transmit 12v power wirelessly
0
Earth potential rise, touch voltage, step voltage
0
Need to transmit 3 bits through window glass continuously
1
Why is wireless power transfer done between two coils at their self-resonant frequency?