I am designing a pen-type barcode scanner (1D) which is operated by user, which means that the speed at which the scanner moves is random. Even worse is that it gets stuck sometimes, so the signal gets stretched or even goes back sometimes.

Well, all is not so bad as it sounds since I ran some tests and it seems that this distortion always happens at the 4th pulse. As it can be seen from picture, this pulse has a very long fall time. So here is the question:

What signal processing techniques can you recommend to make this right? I mean just to mark this pulse as a 1 without making the micro controller crazy? (The output of the photodiode of the scanner is fed to the ADC of a MSP430)

You'll have to make some assumptions. A typical assumption is that the dragging speed of the user doesn't change very abruptly in the middle of a bar code.

Since barcodes contain regions of fixed, known width, it's easy to calculate the dragging speed based on that. Your algorithm just waits for the first strong "bright-dark-bright" transitions, and bases its timing on that.

For example, consider the ubiquitous EAN-13 barcodes (really, read the excellent wikipedia article from which this picture was taken): 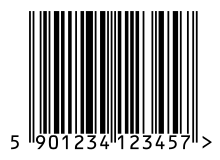 They begin and end with two constant-width stripes. So you watch out for "bright-dark-bright" first, measure the duration of this "dark", then you expect the "bright" and the next "dark" to be as long as the first dark, and if you find that, ie. a equidistant "dark-bright-dark", you've

Based on the length of that "dark", you can then adjust your signal interpretation. Even slow microcontrollers will be able to do that; these barcodes were designed for 1970's electronics, after all, and they became popular when they were trivial to decode using 1980's electronics...

A note on the usage of an ADC: yes, if you have a microcontroller that has an ADC, feel free to use it. You don't have to – classically, barcode readers are implement using analog high-pass filters that only detect the edges between bright and dark (and then emit a 1 whenever there's such an edge) – you'd have to adjust your algorithms, but by reducing your analog input to a binary input, you potentially save a lot of CPU power.

Not the answer you're looking for? Browse other questions tagged signal-processing pulse rise-time barcode or ask your own question.

1
Standalone Barcode Reader that checks against file
2
How to connect USB barcode scanner to a PIC?
4
Reading useful data from barcode input
2
Barcode Scanner to Arduino/Interfacing
0
Trying to make an inventory management system using barcode scanning upon transactions
1
Could a barcode scanner be used to get surface depth information?
1
Interfacing barcode scanner with arduino using RS232
1
UART pins interfacing with Barcode without handshaking signals
24
How is it that two electric currents can travel in opposite directions on the same wire, at the same time, without interfering with each other?