I am reading the datasheet of an ARM Cortex chip, specifically the GPIO chapter. Ultimately, I want to configure various GPIO pins to use them in "Alternate Function" mode for read/write access to SRAM.

Of all the GPIO registers available, I do not understand two: GPIO_PUPDR and GPIO_OTYPE which are respectively the "pull-up/pull-down register" and the "output type register".

For GPIO_PUPDR I have three choices:

For GPIO_0TYPE I have two choices:

What is the difference between all the different configurations, and which would be the most appropriate for SRAM communication?

This answer is general to processors and peripherals, and has an SRAM specific comment at the end, which is probably pertinent to your specific RAM and CPU.

Output pins can be driven in three different modes:

Input pins can be a gate input with a:

There is also a Schmitt triggered input mode where the input pin is pulled with a weak pull-up to an initial state. When left alone it persists in its state, but may be pulled to a new state with minimal effort.

Open drain is useful when multiple gates or pins are connected together with an (external or internal) pull-up. If all the pin are high, they are all open circuits and the pull-up drives the pins high. If any pin is low they all go low as they tied together. This configuration effectively forms an AND gate.

Note added November 2019 - 7+ years on: The configuration of combining multiple open collector/drain outputs has traditionally been referred to as a "Wired OR" configuration. CALLING it an OR (even traditionally) does not make it one. If you use negative logic (which traditionally may have been the case) things will be different, but in the following I'll stick to positive logic convention which is what is used as of right unless specifically stated.

The above comment about forming an 'AND' gate has been queried a number of times over the years - and it has been suggested that the result is 'really' an 'OR' gate. It's complex.

If you consider each of the output stages as an inverter then for each one to have a high output it's input must be low. So to get a combined high output you need three 000 -> 1 . That's a 'NOR'.

Some have suggested that this is an OR - Any of XYZ with at least 1 of these is a 1 -> 1.
I can't really "force" that idea onto the situation.

When driving an SRAM you probably want to drive either the data lines or the address lines high or low as solidly and rapidly as possible so that active up and down drive is needed, so push-pull is indicated. In some cases with multiple RAMs you may want to do something clever and combine lines, where another mode may be more suitable.

With SRAM with data inputs from the SRAM if the RAM IC is always asserting data then a pin with no pull-up is probably OK as the RAM always sets the level and this minimises load. If the RAM data lines are sometimes open circuit or tristate you will need the input pins to be able to set their own valid state. In very high speed communications you may want to use a pull-up and a pull-down so the parallel effective resistance is the terminating resistance, and the bus idle voltage is set by the two resistors, but this is somewhat specialist.

I found this answer from STM32 Understanding GPIO Settings

The ARM (and other microcontrollers) have built-in circuitry to do this. That way, you don't need to add another part to your circuit. If you choose "GPIO_PuPd_UP", for example, it is equivelent to adding a resistor between the signal line and Vcc. 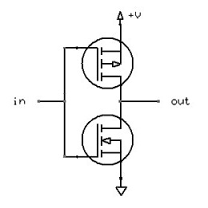 An Open-Drain output, on the other hand, is only active in one direction. It can pull the pin towards ground, but it cannot drive it high. Imagine the previous image, but without the upper MOSFET. When it is not pulling to ground, the (lower-side) MOSFET is simply non-conductive, which causes the output to float.

One more little tid-bit: for microcontrollers that don't have an explicit "open drain" mode, such as AVR and Arduino ATmega328-based boards such as the Uno, this "open drain" mode can be simulated by writing a wrapper function which simply sets a pin to "Output LOW" when you send it a 0 and which configures the pin as an "Input LOW" (high impedance mode, internal pullup-resistor NOT on) when you send it a 1. In this way you get the same effect. These modern 32-bit ARM-core microcontrollers just have a lot more options is all.

Also, p146 of the STM32 Reference Manual linked to above states the following [my additions are in square brackets]:

In Arduino code that "wrapper function" could be implemented like this:

Note that to turn on the internal pullup resistor on an Arduino you can do:

48
STM32 Understanding GPIO Settings
9
What is a push-up/pull-up resistor?
6
Why would an input pin have both a pull-up and pull-down resistor?
7
driving a relay with transistor and Opto-isolator
3
Electrical difference between Push pull and open drain?
2
Why does a micro-controller pin use push pull when configured as an output?
0
STM32F103 GPIO and wrong configurations
0
stm32cubeMX difference between Gpio_output and Gpio_input

2
How to configure an ARM GPIO port (STR9) to an alternate function?
3
Consensus on proper wiring for Cortex M 10 Pin JTAG Connector
4
STM32 GPIO Configuration
16
Why do I first need to set a value and then direction of the GPIO in an embedded processor?
3
Aren't pull-up / pull-down options documented for STM32F103?
2
Mysterious NVM write protection
1
STM32L1 GPIO pin configuration - Power supply current increase due to pin with open-drain setup