Issue with parallel resistors in LTSpice

I'm trying to build a reactive load box, so I can run a guitar amplifier without a speaker. It's basically a device that simulates the impedance/frequency curve of a relatively high power speaker.

I need 4Ω nominal impedance, but my local electronics store does not sell 4Ω 100W resistors, so I though of getting four 16Ω resistors and put them in parallel.

On the right it's the correct impedance curve using a single 4Ω resistor, and on the left, the same circuit but using four parallel 16Ω resistors.

Why are the simulation results different? I thought these circuits were supposed to be equivalent. 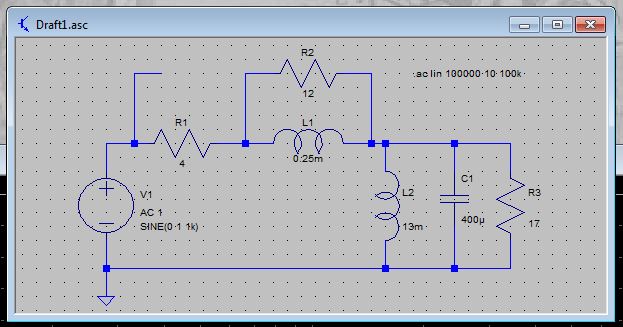 I tried to replicate, and I saw the same behavior. @SteveG did, too. After a few questions regarding the sanity of each of us, I think I found why, and it is pretty simple:

Are you absolutely sure you are actually plotting the right voltage node? In both of your plots, it shows "V(n003)/I(V1)". But I actually realized that if I mess up just a bit with the schematics, the node names change. In my case, n003 became n001 when I added the resistors, or just changed the wires layout.

To overcome this, you can explicitly name your nets by putting labels.

Not the answer you're looking for? Browse other questions tagged resistors parallel ltspice or ask your own question.