I'm creating a costume with some lights and am trying to run 10 LEDS and an on/off button with an LED from a 9V battery (so 11 LEDs in total). Due to the fact that it needs to be from a 9V for portability, I've opted to run the 10 individual LEDs in parallels of 2 each, with 100 Ω resistors at the front of each set, and then a 270 Ω resistor at the end of the series in front of the LED button. (Not gonna lie, I had to use the ledcalc website to guide me on how to wire them all up. I'm a novice when it comes to this sort of thing!)

I would prefer to have the switch at the opposite end of the circuit as the battery, since in the costume the battery pack will be at the top, the lines of 2 leds will be stacked down the middle, and then the button will be at the bottom. But I also know that I can make the wires as long or as short as needed in order to physically place everything where it needs to go so that's not as important. :)

My confusion/question comes from how to incorporate the on/off LED button into the circuit. I want the light to be off if the circuit isn't powered, but to come on when it is, but I can't have the LED part of the button accidentally complete the circuit. The details on the button say that the LED and the switch are separated, so they can be controlled independently, but I'm not not sure how to physically solder the wires correctly to make it work.

Does anyone have insight into this 5-prong switch and could guide me on which prongs to attach to which? Thank you!

[edit] Added a schematic for visuals!

I should preface that I'm not 100% on this so be sure to test each of my hypothesis.

Your switch works like this: the middle three pins NC1 NO1 and C1 correspond to the switch itself whereas the 12VDC +/- corresponds to your LED. NC1 means "normally closed" and NO1 means "normally open". Normally open and close refer to which prong is connected to C1 when the button is in the On or Off position. (Off is, in my experience NC1) See this for more help: Can you clarify what an 1NO1NC switch is?

So thats cool to know but doesn't help your design. All you want to do is connect your LEDs to power when the switch is on and turn them off when the switch is off. In this case, you need to attach either the + or - of the battery to C1. Then you can attach your LED's to NO1 and they will be connected to the battery only when the switch is on. (If my earlier assumption that off = NC1 is wrong, just substitute N01 for NC1. The only difference between connecting your LEDs to NC or NO is what position of the switch will turn on your LEDs) Note: You will only use either NC or NO. The prong you don't use will have nothing attached to it.

Connect the free side of you LED's to the other terminal of the battery and you have a completed loop: Battery -> Switch -> LED -> Battery. (Make sure your LED's are connected in the correct direction. You want to see this pattern: Battery+ -> Switch -> +LED- -> -Battery OR Battery- -> Switch -> -LED+ -> +Battery)

Also, be sure to check what voltage the switch LED requires. Its concerning that its marked 12VDC. Its possible the LED for the switch already has a resistor and more worrying, 9Volts may not be enough to turn on the switch LED. You may need 12V with no external resistor. 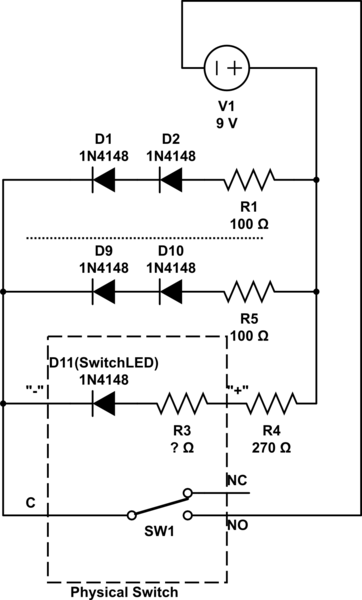 Hope this helps! Sorry if its a bit unclear.

The general topology will look like the following diagram. I've broken it into two parts -- left and right -- with dashed boxes. The left side is your switch at the bottom of the costume (as I understand where you want things) and the right side is the battery system at the top of the costume and flowing down from there (as you mentioned you could do.)

(There are some other arrangements, but they all result in three wires because you say you want the battery supply on the opposite end of where the switch is at. If the battery and switch were together, then you could do with less than three.)

One thing to worry about is that a \$9\:\textrm{V}\$ battery doesn't actually provide full voltage for long. It rapidly drops downward. You could plan on as little as \$4.8\:\textrm{V}\$, in fact, if you had some kind of circuit that would keep on providing the right current and voltage to your LEDs. But that's extra complexity and cost and I'm not going there. So you need to figure out what you are willing to accept and how long you expect all this to run.

This is a serious difficulty in using a \$9\:\textrm{V}\$ alkaline battery. They don't hold their voltage for long. A circuit designed well for one of these should be able to operate down to some much lower voltage. At least down to \$7\:\textrm{V}\$ and perhaps even lower, towards \$6\:\textrm{V}\$.

But if pairing the LEDs will require all of that (and more, perhaps), then it is very difficult to make this work well with nothing more than a dropping resistor for each pair of LEDs.

So. Disclose your exact LEDs (we need to know operating current and voltage.) Disclose how long you want all this to operate (this has a great deal to do with the battery supply itself as well as possible circuitry options to consider.) Disclose how tolerant you are willing to be about the LEDs dimming down over the period of operation you need.

The value for the resistors, including \$R_1\$, may depend upon all of the above. And, depending upon the details if and when you answer, the resistor idea may not even work well at all making the entire question moot.

So. You should do some testing.

I'd recommend that you start out by considering the idea of bypassing the \$100\:\Omega\$ resistor that is included, as that may permit you to still use them in pairs. If you try that, consider putting two of them in series and bypassing (shorting out) just one of the two resistors in the pair. See how that works in terms of brightness and, if 10 of them running that way, longevity. Also set \$R_1=220\:\Omega\$, or thereabouts. Up or down, but in that neighborhood to start.

If that works for you, then go with that design. If not, you'll need to consider alternative ideas.

Not the answer you're looking for? Browse other questions tagged led circuit-design toggle-switch or ask your own question.

15
Can you clarify what an 1NO1NC switch is?

0
Circuit with a main switch that powers on/off 4 different switches with LEDs
0
5 pin push button switch with LED AC wiring question
3
I’d like the 12v rocker switch LED to illuminate when the switch is turn OFF
1
Switch/Pushbutton for Multiple LED String Lights
0
33 LEDs in parallel over-heating unprotected Li-Ion Battery
1
How to constantly power an LED circuit normally controlled with a momentary switch?