Will the gain of the following IDEAL Op-Amp be zero? 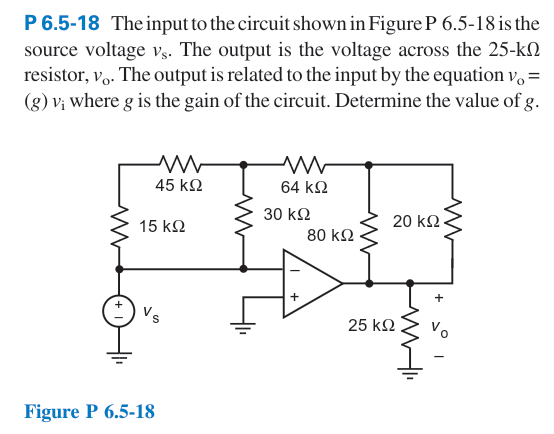 Most of the answers are correct.

Trying to condense them: the feedback doesn't count. Whatever the 6 resistors and Vo try to contribute to V-, all it ever sees is Vs. Similarly, the 25k load doesn't matter. So, all the op amp sees is Vs which has it banging its head against the op amp's rails, whatever they are, with the rail bangee (invented a new term) depending on whether Vs is more or less than 0.

All in all, it looks like a mistake of some sort in the statement of the problem, or a trick question.

You're correct that the inputs to an op amp are equal for most useful connections. This is not one of them. The inputs usually are equal because the negative feedback makes them so. There's no feedback at all in the problem you show.

Assuming Vs is a conventional 0\$\Omega\$ source impedance independent voltage source, the gain is -\$\infty\$.

All the resistors can be ignored since they are connected between 'stiff' (0\$\Omega\$ impedance) voltage sources.

Imagine the input Vs is a very tiny voltage (say +1uV or whatever you consider to be inconsequential). The differential voltage the op-amp sees is -1uV. It will multiply that differential input voltage by an enormous gain giving a huge negative voltage (perhaps limited to the supply rails depending on how 'ideal' the imaginary op-amp is). Same thing if Vs = -1uV except it will result in a huge positive output voltage.

There might be some kind of argument that it's just a huge number and not infinity since the resistors could pass enough current to overcome the zero source impedances, but I'll leave that kind of thinking to philosophers and pure mathematicians.

Most of your reasoning is correct, but not all.

If you look at the diagram bellow, and pick values for R1=1kohm and R2=2kohm. And an input of 1V. Assuming that we do not get an output that is too high or too low.

Then with your correct assumption that the op-amp is trying to get the +ve input to be the same as the -ve. What output will produce this?

What will the gain be? ( I will leave this for an exercise for the reader.)

Follow the guideline that if the inverting and non-inverting inputs are not equal, then the opamp is in saturation. That gets you through most elementary analysis. If you want to get a bit more particular, you could parallel the feedback and input resistor and tie the result to ground at the nonnverting side to balance the offset,

The circuit is a mess:

1
Simple Circuit with a Op Amp
1
Question about Circuit Analysis
2
Inverting op-amp gain
0
Confused how to derive output voltage from Op Amp and RC circuit
0
Opamp input resistance
0
Understanding negative feedback in an inverting op-amp
1
Question about feedback in a current reference
1
Voltage Follower - OPAMP
0
What is the problem with connecting a negative voltage to an op amp's negative lead while the possitive one is grounded?
4
How to implement unity gain buffer with long-tailed pair?