I built a simple MIDI-output circuit (as seen here: http://www.notesandvolts.com/2015/03/midi-for-arduino-build-midi-output.html). I now would like to add an LED to that circuit that should be on unless there is a signal sent. This behavior can be found in most of the common MIDI-interfaces.

I'd really like to not add an LED to an extra port of my microcontroller but instead use the already present signal on the TX pin and lighting an LED with it up.

I tried to connect an LED directly to it as shown here: 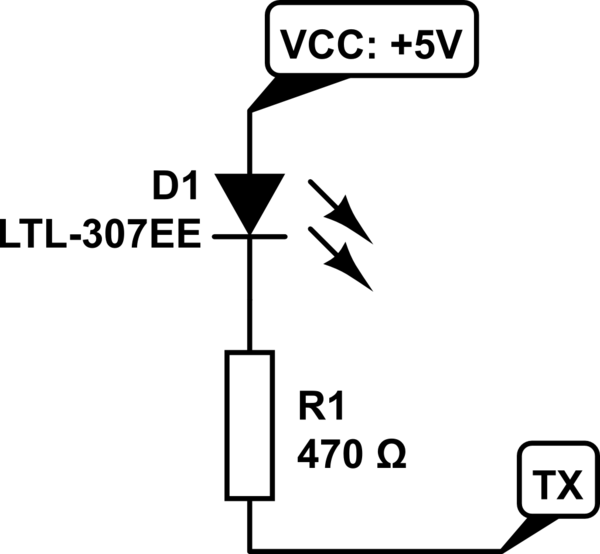 That works well (except for inverted behavior – but that could easily fixed by an inverting Schmitt-Trigger) but I fear that using this way will reduce the signal quality on the MIDI-line. So I'm trying to implement an circuit with OpAmp as shown here. Unfortunately even with the suggested fix of a voltage divider in the comments (e.g. 4.7k and 10k resistors) I only get the normal behavior.

Is there any decent way to solve this problem? On multiple commercial pcbs with this exact function I do not see any OpAmps. So maybe there is an even better way?

Thanks in advance for any input!

So when Tx is high, the LED will be off right? So why not connect the LED circuit between Tx and ground: - 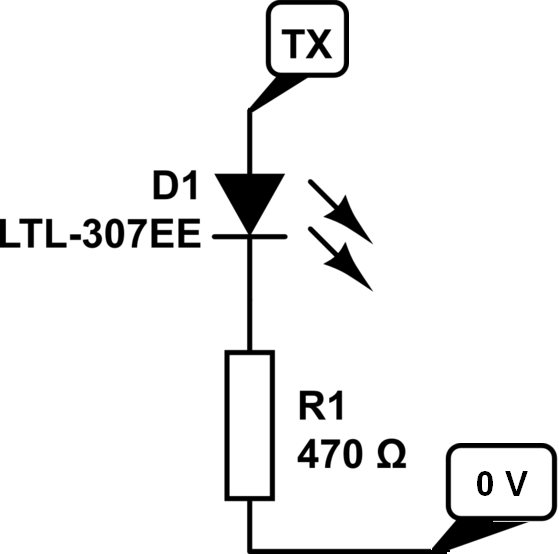 Now, when Tx is high, the LED will be on.

After much tinkering I got a schmeatic that does exactly what I need: 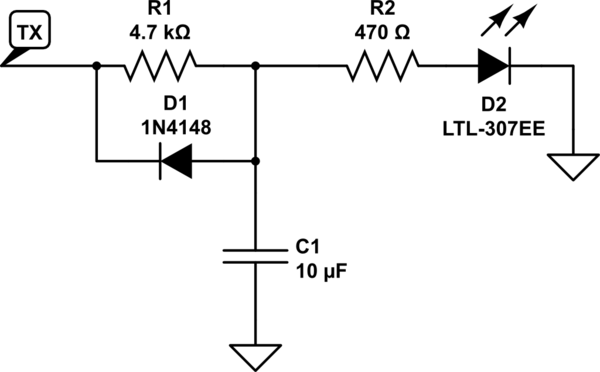 While the TX-line is high the LED is staying on. When the TX-line drops low, the capacitor discharges quickly via D1. Once TX comes up high again, first the capacitor is charged over R1 which requires some time. D2 stays off for that while, it blinks. Because of the relatively big R1, the TX-line shouldn't be affected at all. R2 is needed so that C1 doesn't discharge over D2 and destroying it in the process.

If anyone has an idea of optimizing that circuit: please share. I'm really interested! I chose R1 and C1 as shown as I already have the components on other places on my PCB, keeping the component type count low.

Not the answer you're looking for? Browse other questions tagged led operational-amplifier midi or ask your own question.

1
Controlling electricity flow via MIDI to power lamps
2
Use a PC123 optocoupler for MIDI input
1
ATMEGA328P send MIDI via USB
3
Using a MIDI connector both as MIDI In and Out (not simultaneously)
1
MIDI out / thru circuit questions
6
4N35 opto-isolator for MIDI input does not work?
2
MIDI source selector switch
8
Is this DIN connector suited for MIDI devices?
0
Sampling MIDI Via Parallel Port