What is the best interface circuitry for using FSR sensors?

Force Sensitive Resistor (FSR) is a sensor which lowers its resistance when there is force upon it. If there is no force acting on it, the resistance is ~10MOhms.

Looking at Interlink's guide (here) and FlexiForce's A401 datasheet (here) here are interface circuits which are recommended:

Pros: Input resistance of OpAmp is near-infinite
Cons: There is offset error due to OpAmp 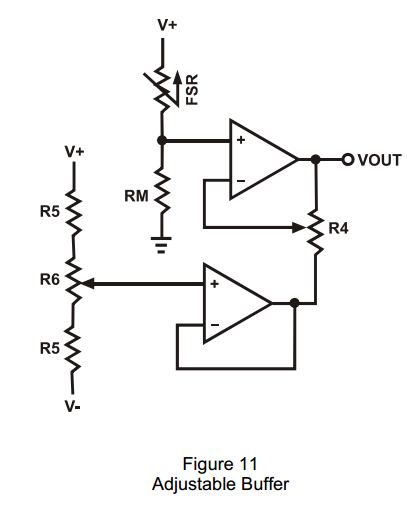 Pros: Gain and offset can be tweaked
Cons: Rather complex,IMO 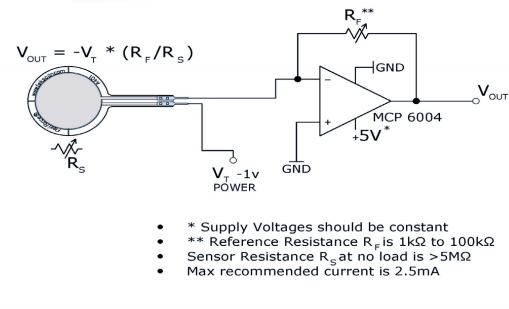 Note that there is a limit on the current flowing through FSRs. The circuit should also take that into account.

1- Are there any other circuits for this application?
2- What is the best configuration for (A) Calibration and (B) Normal Use?

Here are my other questions related to FSRs:
What is meant by "adjustment of the output gain and offset" of a Force Sensitive Resistor interface circuitry?
What is the maximum force that a FSR sensor can detect?

FSR sensors have both creep and hysteresis. That is one issue. The other issue is a good interface circuit which both limits the current and produces zeros offset and noise.

Not the answer you're looking for? Browse other questions tagged operational-amplifier amplifier sensor circuit-design interface or ask your own question.

0
What is the maximum force that a FSR sensor can detect?
0
What is meant by “adjustment of the output gain and offset” of a Force Sensitive Resistor interface circuitry?

6
What is 'best' temperature sensor for an array of sensors
5
Best PC interface for simple custom hardware
0
What is meant by “adjustment of the output gain and offset” of a Force Sensitive Resistor interface circuitry?
0
What is the maximum force that a FSR sensor can detect?
0
How to convert a range of 0.5 to 4.5V for a range of 0~3.3V? ACS712 20A current sensor
1
What is a good circuit for recording a piezo contact microphone or an electric guitar pickup?
2
FSR linearization when using adc
1
Confused with understanding a recommended signal conditioning interface
11
low noise, low distortion analog multiplexing
7
Which is the preferred approach to PCB layout for signal vs power traces in analog circuits, and things to consider?