In our final exam we had a question about the following MOSFET push pull configuration: 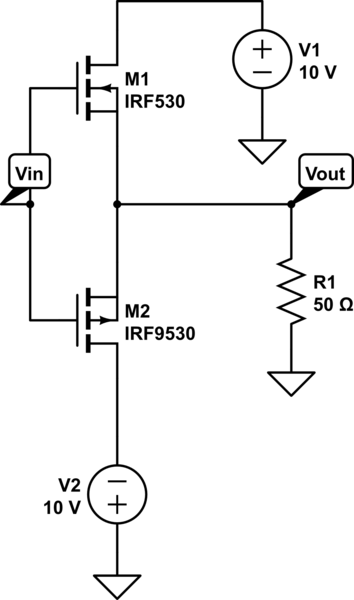 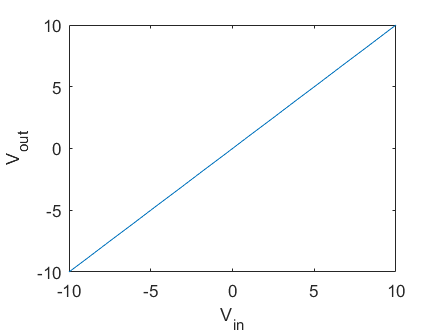 Plot of these two equations are 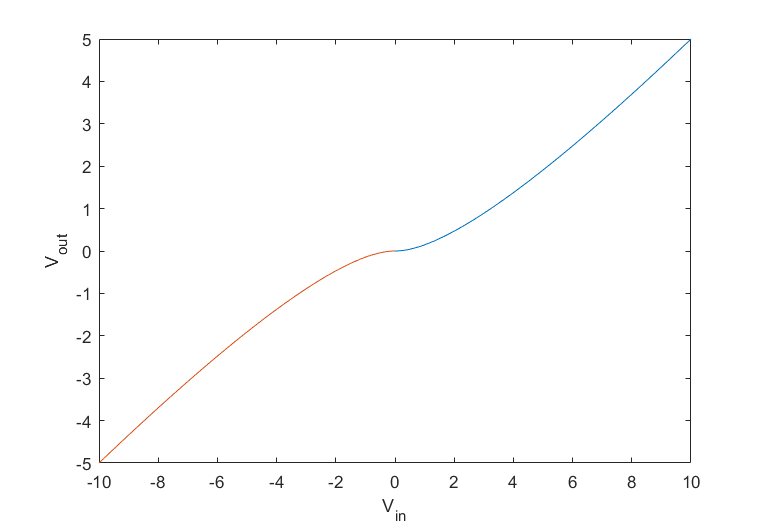 which is substantially different from the one given in the answer.

The teacher musta never touched a MOSFET with a 10-foot pole in their lives.

Let I be the current flowing in resistor R1, from top to bottom:

If only the top NMOS is conducting, then:

However the bottom PMOS is upside down, which introduces a nagging minus sign... If only the PMOS is conducting, then:

Fortunately, since both FETs are identical save the polarity, the whole thing is symmetrical around zero, so we only need to study what happens in one polarity. Say, Vin>0.

To solve this, simply solve for Vin! And stitching both polarities together, we get:

...and this looks quite like the curve posted originally.

From this it is easy to get G = Vout/Vin.

Also, anyone who has handled a push pull MOSFET stage in their life knows that the curve calculated by the OP looks correct. This is how they behave. If anyone can get a push pull to make a straight line like the teachers'.... run to the patent office at once! You gonna make billions!

Another demonstration in case you're incredulous

...and the teacher's gain curve is a straight line with a constant derivative...

Then, nope. Still no workie.

These ain't perfect FETs because their Vt is zero! They're normal square-law FETs with a zero Vt. We can build NMOS with positive or negative Vt, it's easy, you can grab'em at gigikey for a nickel, check DN2540...

Now, if anyone can find me a PMOS with positive threshold voltage... I'd be interested.

Both have zero threshold voltages so will act as ideal N and P MOSFET source followers with no cross over region. The answer given is correct.

your calculation is wrong: think about what Vtn / Vtp is.

source followers have close 1x of voltage gain, putting aside their threshold voltage.

edit: to help you a little bit more.

your equation can be rewritten as

take a square root on both side and you get

it shows you that the gain is slightly less than 1, and independent of Vin, just as we would have expected.

Not the answer you're looking for? Browse other questions tagged mosfet push-pull or ask your own question.

2
What is the following MOSFET circuit good for?
5
Audio Amp-Calculate Current gain of a Push-Pull BJT Pair (and remove Beta Dependence)
0
Find the Range of Rs for which the transistor is in saturation
3
Eliminating MOSFET drain voltage spikes in a push pull power supply
0
What is the use of resistors in series with BJTs in a push pull amplifier configuration?
0
Small-signal voltage gain of P-type common-gate circuit
0
Transistor operating region - push pull & current mirror
0
Calculating output impedance without measuring open-loop output voltage of a push-pull Class AB MOSFET Amplifier