Are Schottky diodes the best option for this application?

I want to make bridge rectifiers for some toy field phones so that the wires that connect one phone to the other will work regardless of polarity.

I was wondering if Schottky diodes would be the best option because of there low forward voltage drop?

But I don’t know if the higher reverse leakage of a schottky would be detrimental to proper function.

6v dc (from AA batteries) would be the maximum voltage involved.

If they are what would be a particular diode with the lowest forward voltage drop?

Schottky diodes are best used for fast switching application and where the voltage drop due to diode needs to be as less as possible. Disadvantage is the high reverse leakage current (and the current is temperature dependent) and lower reverse breakdown voltages.

If your project is battery operated only and need to save each bit and byte of energy for long term, then opting for normal diode with least reverse leakage current will be better choice.

Also other factors such as price may factor. Schottky diodes are expensive. So, its a trade off among reverse voltage rating, speed, leakage current and price. So, for your case I would really see further down on the requirement of minimum battery voltage needed for the circuit to operate and battery life time expected. Only, then a good decision can be made.

Also, if space is not a constraint, opting for PMOSFET as blocking diodes (even NMOS will do) also help in getting out all the juice off battery to the circuit as the forward drop of FETs will be in a few 10s of mV typically.

Using a diode to ensure current flows in only one direction, without causing a voltage drop

I was wondering if Schottky diodes would be the best option because of there low forward voltage drop?

Probably. A typical 6V dry cell battery has useful capacity down to ~4V (1V per cell) and your telephones are probably designed to work down to this voltage only (if they could use a lower voltage then why have 4 cells?).

A silicon bridge rectifier drops ~1.4V (about the same as having one flat cell) which may significantly reduce the operating time. A Schottky bridge drops ~0.8V.

Here's an example 6V AA discharge graph. I have copied the original curve to show what you would get with 0.8V and 1.4V drop through the rectifier. In this example (80mA average current draw) the ~12 hours run time is reduced to ~7.5 hours with a Schottky bridge and 2 hours with a silicon bridge.

In practice it might not be quite this bad because the current draw will probably be less at lower voltage, but you get the idea. 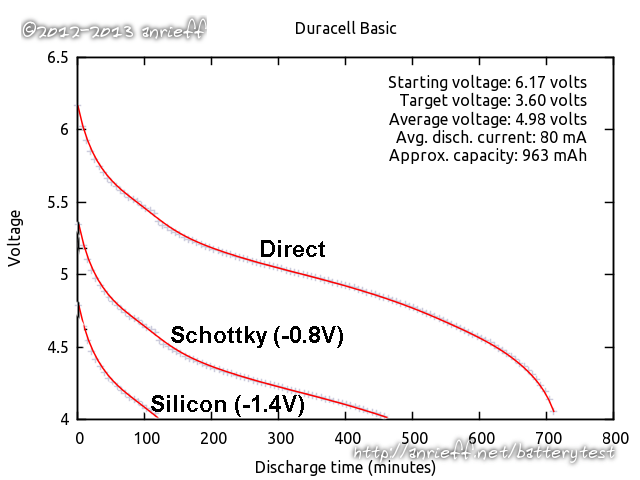 I don’t know if the higher reverse leakage of a schottky would be detrimental to proper function.

Finally, consider the current draw of your phones. If it is much higher than the leakage current (likely) then it shouldn't be a problem. A higher current diode may have lower voltage drop which is more important.

When you say best, what do you mean? Cheapest, best performance, easiest? Usually it's a balance of things. Shottky is cool if only need simplicity. Otherwise you need more complex circuit.

17
Using a diode to ensure current flows in only one direction, without causing a voltage drop

7
Is a Schottky diode appropriate for reverse polarity protection?
1
Using to diodes for OR'ing in OVP comparator
0
Choosing Diodes for 3-Phase Rectifier
0
Germanium Power Diodes
0
Type of diodes for a particular application
3
Voltage drop across each diode and current drawn from battery
0
How these two diodes used in the ciruit protect from the voltage spikes?
0
Should I replace this Schottky Diode?
0
Schottky Diodes as Full Bride Rectifier