Unable to program ATSAML21 PCB via SWD - Problem with connection?

Well, I'm officially stumped (and so are several other engineers)...

I have a custom PCB running an Atmel ATSAML21E18B microcontroller, which I'm trying to program through an Atmel ICE debugger / programmer. After some initial problems with the board (an ungrounded pin which has now been grounded), I managed to get a nice stable voltage of 3.3v running through the board from 3 AA batteries going through an LDO on the board.

The next step was to upload a simple test program which blinked a couple of LEDs on the board to make sure things were all nice and working. I plug the board into the Atmel ICE via a 10 pin SWD header on the board, open the device programmer in Atmel Studio and do a voltage read - 3.3v as expected. Try to get the device ID, and I get the following error: 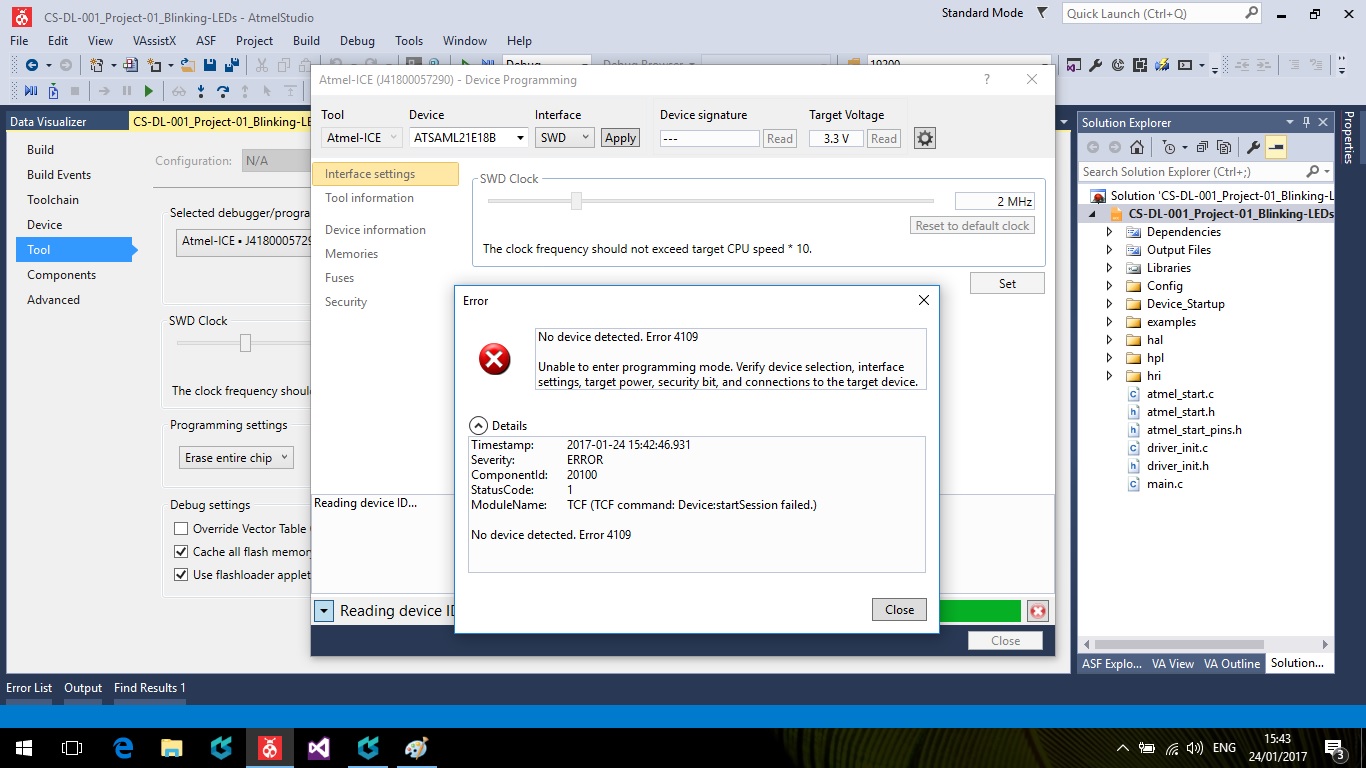 I've tried knocking down the SWD clock to lower frequencies as suggested by a few people, but no luck. I also tried using the Atmel ICE on the L21 Xplained Pro board, and everything works fine there, so I know that the programmer isn't the issue.

I've had a few other engineers look at the boards and the schematics, and they can see no obvious errors. We all checked the datasheet to make sure that the connection between the mcu and the 10 pin header was as described in the datasheet.

Honestly, I have no idea what's going on here. Below is a copy of the schematic: 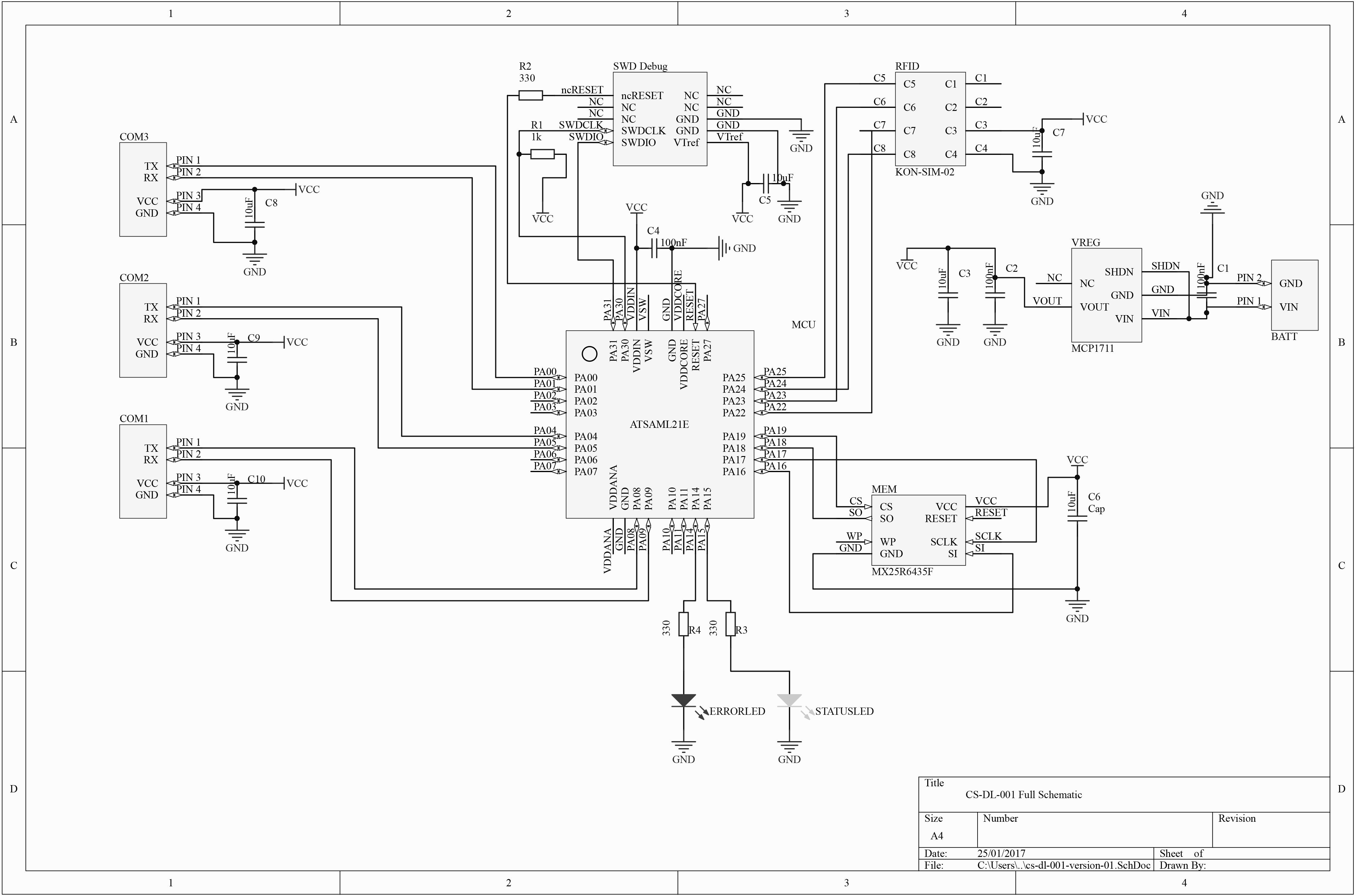 If anybody here has even the slightest inkling of what the issue might be, please tell me. My head hurts from banging it against the desk!

As it turns out, on the 32 pin variant of the SAML21, you have to tie VDDANA to the power supply as well (with a decoupling cap in place obvs).

Got around it by soldering a bit of wire from the VDDANA pin to an exposed power pin on the first batch of boards. Got it rectified properly on the second set.

Note to self: read the datasheet properly next time!

Try removing R1 (its not needed), that pullup resistance doesn't seem large enough, especially since thats a very sensitive clk line running at 2-4Mhz by default. Man thats a lot of current for your clk line to source when it goes low which may have damaged the debugger. So make sure you can still read the device ID of the SAML21 Xplained Pro board.

Below are images of the SAML21 Xplained Pro schematic found in a zip here, which oddly was linked only in there User Guide PDF which I found in a google search for that boards schematics (Just to make sure). So moral of the story reference other open source designs and remember GIYF, before pounding your head on the desk... 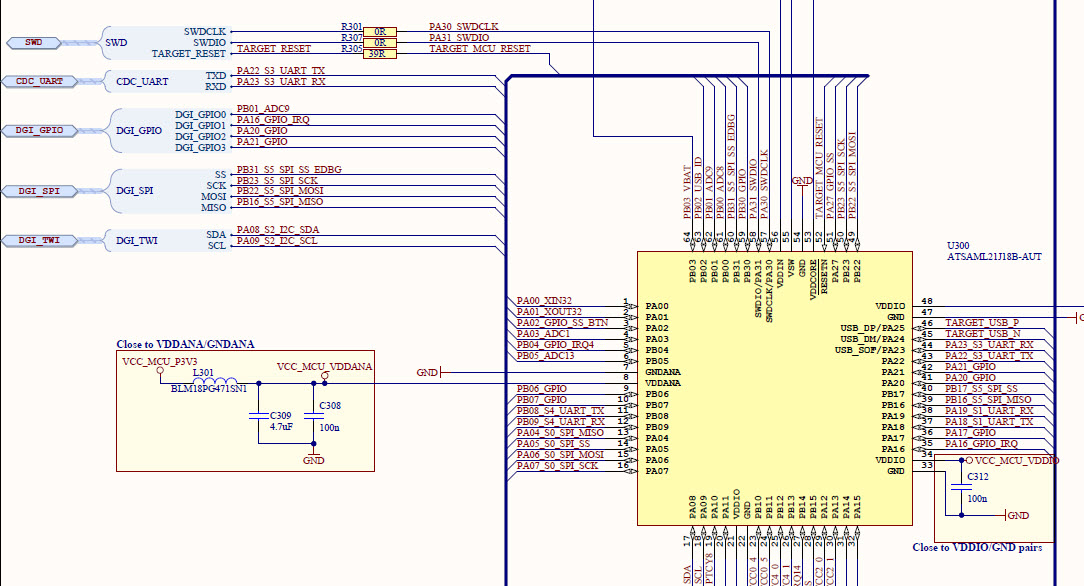 Not the answer you're looking for? Browse other questions tagged arm atmel-studio swd cortex-m0 or ask your own question.