Ask Question
Asked 4 years, 11 months ago
Active 4 years, 11 months ago
Viewed 998 times
2
\$\begingroup\$
This question already has answers here:
Is there a way to control the PWM duty cycle of a 555 timer without using a variable resistor? (2 answers)
How do I extend the output (high) time of my circuit (retriggerable)? (1 answer)
Closed 4 years ago.

I've constructed a simple circuit with a 555 timer: 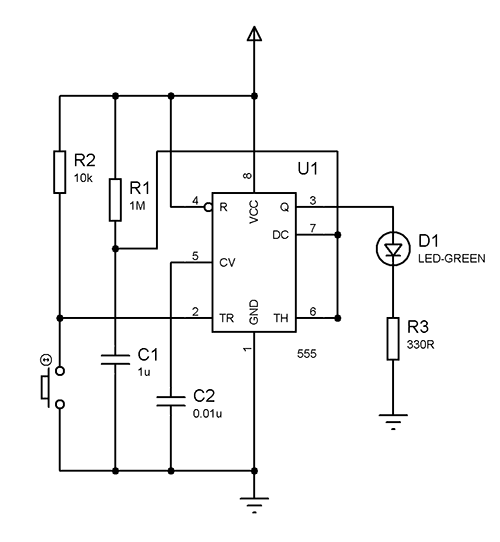 When the button is pushed, the led lights for about a second as expected. What I want is:

Is this kind of thing possible?

Put in a diode Anode to C1 R1 junction Cathode to switch R2 junction and you should get pretty close.

This (mostly) discharges C1 when the button is pressed restarting the timing period.

Or alternately (the really simple solution) eliminate R2 disconnect the DC (discharge) pin. Wire tr to th and the + side of the switch. This is not a finite state machine it is a simple retriggerable monostable.

There's no good reason to implement something that is strictly a sequential logic with a 555. Simply go, buy the cheapest microcontroller you're willing to program and do it with that. Less effort, less parts, in the end, usually cheaper, and much more flexible.

Note that this doesn't apply to all possible applications, but yours is what is typically called a finite state machine; that is, it switches between different, well-defined states in its operation, based on some inputs (namely, time, and button presses). In each state, it reacts differently to these inputs. Historically, processors were built to deal with these kinds of problems, that's why I'm acting a little bit surprised here

There's cheap Arduino clones all over ebay. The logic you're trying to implement is tremendously complex if done in analog, and totally easy if designed in C, in an Arduino sketch, or even a graphical programming language.

TL;DR: Don't try to do this with a 555. What you describe is too complex to be sensibly built with that, but totally easy if you have a microcontroller

6
Is there a way to control the PWM duty cycle of a 555 timer without using a variable resistor?
2
How do I extend the output (high) time of my circuit (retriggerable)?
1
How to Turn the 555 Timer Output (Astable Mode) into a Decaying Square Wave?