Can anyone identify this component?

I'm trying to solder together a small LED array with a dimming knob out of a bunch of old parts I have laying around, but I can't seem to identify how to wire this component: 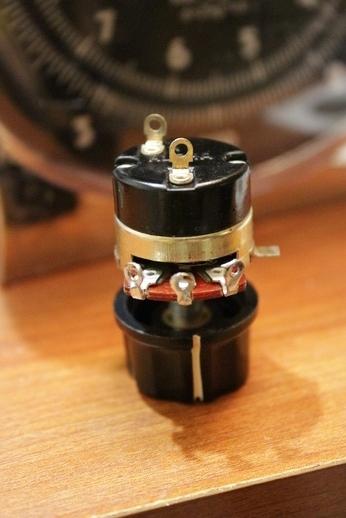 Any help would be appreciated. Thanks!

This looks like a potentiometer with a built in on-off switch on the back.

When you either push on the knob or turn it to the end of it's range does the resistance between A and B change from infinite to 0 ohms? If so, you have confirmed that it is a switch.

These are (were) commonly used as combined volume controls and on-off switches on radios before the digital age.

Since you measured an exponential change in resistance you have what is known as a logarithmic taper potentiometer. The other type is a linear taper. Logarithmic taper is used for volume controls since human hearing does not respond linearly but rather on a decibel scale.

Not the answer you're looking for? Browse other questions tagged resistors components dimmer or ask your own question.