Lorentz forces on loop cancel each other out so how do eddy current brakes work?

Let's take the pendulum example. When it passes through the magnetic field, eddy currents are induced. Those currents flow in circles and now with the presence of current and magnetic field lorentz forces are created against the pendulum.

However, if the current is flowing through a loop the forces cancel each other out because of the symmetry of the circle. I understand that the same doesn't apply for torque and I think that's the key to the explanation. And even if I'm right and that really is the case, a detailed answer would help others studying about eddy currents understand how the forces actually stop the pendulum.

Also, what would happen if the pendulum was superconducting? 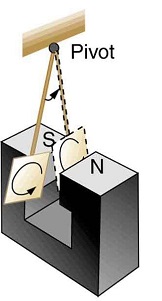 Imagine your metal plate to be much smaller - so small that it is in an uniform magnetic field when it moves between the poles. Then a constant voltage is generated between the upper and lower edges of the plate - just like in a generator. No current as soon as the electrons in the metal have piled to up or down. The eddy current is the result from the non-uniformity of the magnetic field - different induced voltages generate balancing current which is horizontal and make room for new electrons to pile vertically - that's the eddy.

But your picture is wrong. The balancing current is not a single circle, but two and their centers reside at the edges of the magnet. See the following Wikipedia image from "Eddy Current Brake" 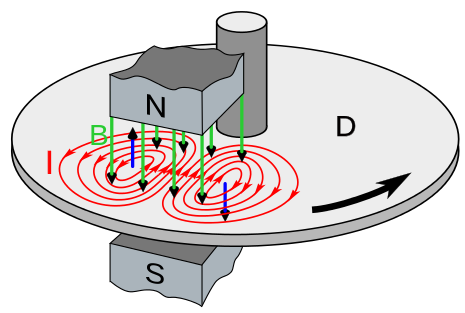 There's a continuous current in the metal that causes dissipation, but seemingly there still should not be any reason for braking because the two eddies work as electric magnets that push the plate towards the poles and that motion is prevented mechanically.

The exisistence of your question hints that you want to hear nothing about the energy - you want to see the forces that you see as the basic primary reasons for the braking and also for that so called energy which you see only as an artificial (= calculated only) result.

This is your major error. The force is caused by the change of the field energy, the energy is not caused by the force. If somewhere a motion causes the dissipation of the energy, then that motion needs energy and it must be produced by work. The force appears in such direction that the work will be done. In this case we see the braking.

Addendum for the superconductive plate: See the image. Let the plate just have arrived from the left. I've rotated the following image to horizontal to keep the directions same as the Wikipedia image had: 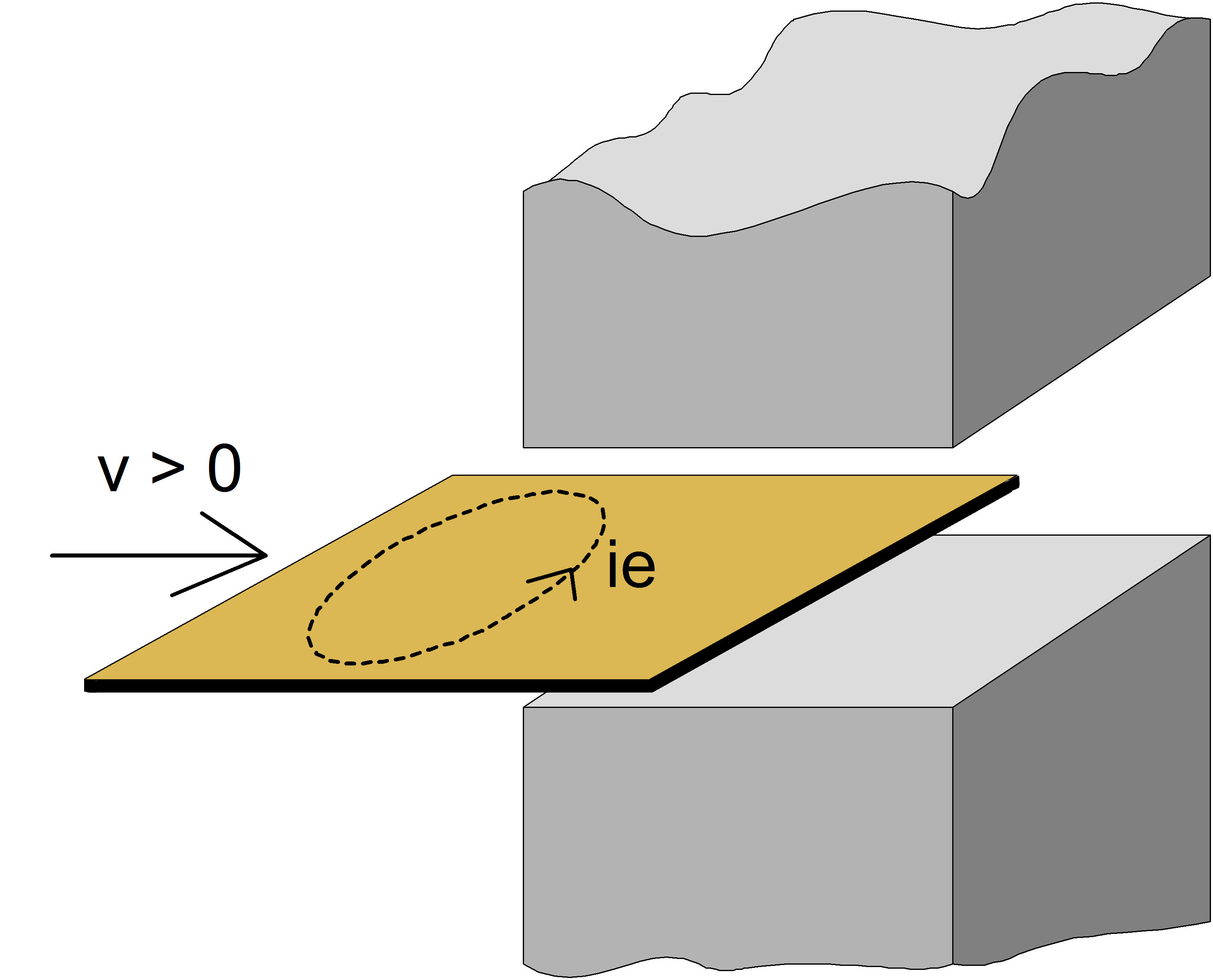 The eddy current ie has generated. The curret is at the right side of our plate the same as ie in the picture . The backward current fills the left side. So - what is caused to the magnetic field? It has cancelled inside the plate. The non-lossy curret has grown just into the measures that cancels the magnetic field. No more effect is available. Because the total volume of the magnetic field has diminished, its total energy has got lower. This kind of total field energy change is attractive, so the plate is sucked into the space between the magnetic poles. That of course increases the speed of our pendulum and that speed boost helps the pendulum out of the hole, when the magnet tries to suck it back.

Conclusion: A superconductive pendulum will get a speed boost when it enters to the slot between the poles. That speed boost is lost when the pendulum gets over the middle position. No permanent acceleration or braking happens. Think about a ball that rolls over a gentle dimple.

"the forces cancel each other out because of the symmetry of the circle" and I think this is where your understanding is off. It's only true if the full circle is in the same magnetic field.

Instead, remember that the current is induced where the magnetic field is changing.

So, (referring to your diagram) where the conductor is entering the field, a downward flowing current is induced. And the force exerted is backwards, i.e. retarding the pendulum. (As it must be from conservation of energy).

And where the conductor is leaving the field, the induced current is upward - because the direction of the change in flux has reversed. So the force exerted is still backwards, i.e. again retarding the pendulum. (conservation of energy again).

So the forces do add, but because of the reversal (leaving the field instead of entering it) they don't sum to 0, they sum to twice the individual force.

The eddy current meets a resistance and heats up the pendulum, this energy needs to come from somewhere.

The current induced by the magnetic field itself creates a magnetic field, which does not match the field from the permanent magnet (it is weaker, because of resistive losses, and also has a different shape because the current cannot cross the edge of the pendulum), which is where the braking action comes from.

Not the answer you're looking for? Browse other questions tagged electromagnetism inductance or ask your own question.

14
How does this iPhone app measure the power flowing through an AC appliance cord?
1
How is the current induced in this circuit?
2
Moving the magnetic field around a fixed conductor?
0
Can an alternating magnetic field be “informationally” shielded?
1
Does magnetic coupling cause common mode or differential noise in this case?
0
Confusion about the direction of the vectors: motional EMF
0
How strong are eddy current brakes?
0
Why does inc R of a RL circuit increase dVL/dt. Here I have circuits and details