Thanks to Robert's comment in one of the answers, I think he's right. This is probably dielectric Absorption.

It's cause by kind of interia of the dipoles (ions) in the electrolyte while charging and discharging.

Dielectric absorption is the name given to the effect by which a capacitor, that has been charged for a long time, discharges only incompletely when briefly discharged. Although an ideal capacitor would remain at zero volts after being discharged, real capacitors will develop a small voltage from time-delayed dipole discharging, a phenomenon that is also called dielectric relaxation, "soakage", or "battery action". For some dielectrics, such as many polymer films, the resulting voltage may be less than 1–2% of the original voltage, but it can be as much as 15% for electrolytic capacitors.

When the capacitor is discharging, the strength of the electric field is decreasing and the common orientation of the molecular dipoles is returning to an undirected state in a process of relaxation. Due to the hysteresis, at the zero point of the electric field, a material-dependent number of molecular dipoles are still polarized along the field direction without a measurable voltage appearing at the terminals of the capacitor. This is like an electrical remanence.

From a Mouser note

Where a capacitor is once charged and discharged with both of the terminals short-circuiting and then left the terminals open for a while, a voltage across the capacitor spontaneously increases again. This is called “recovery voltage phenomenon”. The mechanism for this phenomenon can be interpreted as follows: 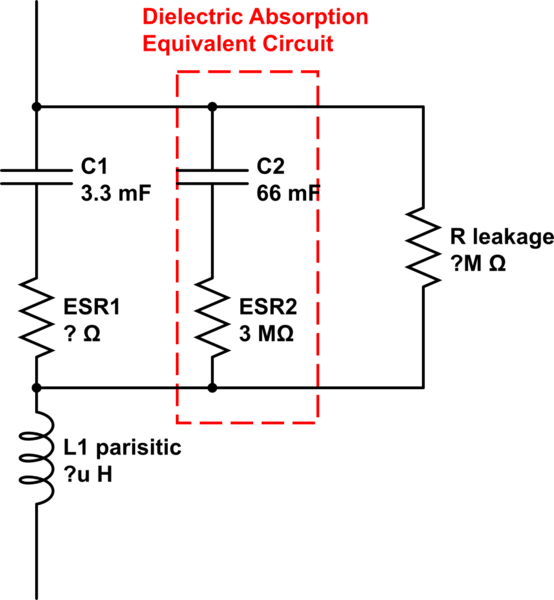 Note for old E-Caps each component value in the equivalent circuit can be estimate by various tests. Your test estimates the ESR2 * C2 = T2 = 180ks C2/C1=20 with as the absorption/cap ratio.

Parallel Leakage R values are known to reduce with aging and conditioning old large E caps using a large Series R will raise the leakage R values towards the original values in many cases. This is a safe practice when dealing with big-old low ESR caps to prevent interlayer short circuits.

Actually the dielectric absorbtion story is ok, but complex To put it short:The electric field deforms the molecule structure just like some thick and soft cloth gets gets a dimple when you press it by your hand. By the time that dimple vanishes and the cloth rises a bit upper again against the gravity.

The molecular deformations in the electrolyte and insulation layer reverse gradually and the ionic particles return to their original places. That means a new electricity, because the charge distribution is changed.

your multimeter is charging up the capacitors.

Not the answer you're looking for? Browse other questions tagged voltage capacitor multimeter or ask your own question.

2
Different voltage readings when using different ranges on a multimeter
1
Testing Capacitors - Differing Results Each Time One Is Tested?
0
Why does the measured potential-difference between two poles of an AA fizzle out after 5 seconds?
0
How do I connect up a replacement run capacitor
5
Home made High voltage Capacitors
4
Why does a permanent, non-moving magnet, stuck to a long piece of metal generate a voltage?