I am making a clock, using 6 rather large 8 segment blue LED displays. The circuit below is for one of the displays. All the displays run their grounds through the same N-MOSFET at the bottom right, and this is controlled by an Arduino with PWM to control the display's brightness.

I am running the 12V through the Arduino (via Vin). I am worried about the current that the displays will be drawing. I calculated (I am a noob) that I need a 105 ohm current limiting resistor on each of the 3 LED segments in order to get 20mA of current to drive the blue LEDs. If each segment draws 20mA, then an 8 segment display will draw 8x20mA=160mA of current. And so the clock will draw 6x160mA=960mA of current, if it is at maximum brightness. Is this correct?

Thank you your help, 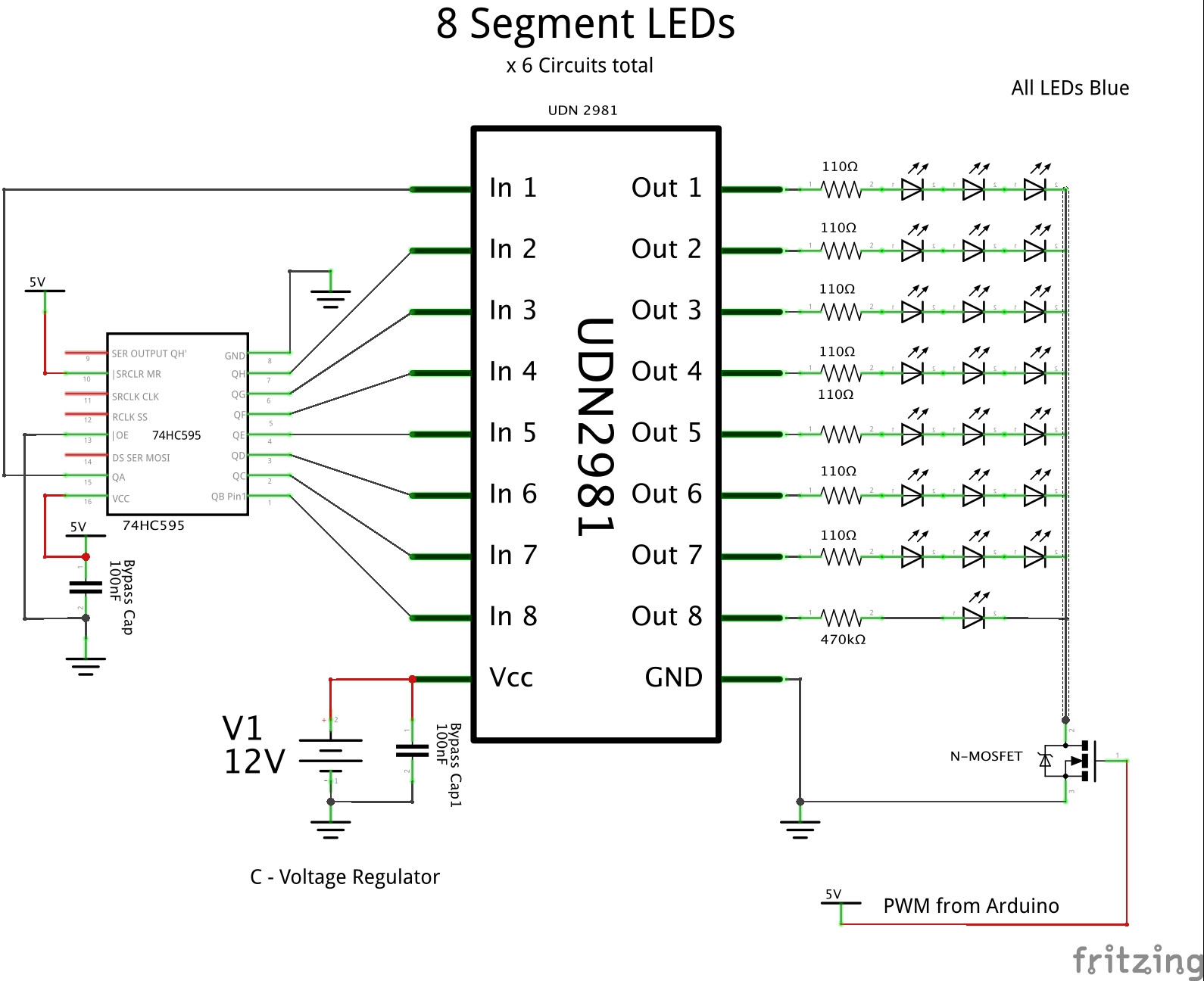 So, I did my own calculations (using http://ledcalc.com/) with the assumption that each blue LED requires a forward voltage of 3.4 volts (thus adding up to 10.4 volts for 3 LEDs) plus 20 mA of desired current and got a recommendation for a 100 Ohm resistor. So yeah, yours is probably fine too, but you always have to do the calculations based on the manufacturer's specs of the LEDs you're buying. I'm assuming that for the single LED you meant 470 Ohms, not kOhms. The total current draw for all the LEDs should be 8x6x20=960 mA indeed.

Now, to the question of running the LEDs. According to the drawing above you're running the driver chip off of your 12V power supply, which is fine. Trying to use the same to power the Arduino (via its Vin pin) is pushing its limits: since Atmel chips work off of 5V level signals, the 12 volts need to be reduced to 5V by the on-board regulator. That's a difference of 7 volts, which is a lot for the linear regulator to overcome (you said it yourself that your Arduino runs hot and crashes after a while, others who tried to do the same have complained of the same symptoms). Thus you could try two things instead: either get a ~7.4V (two li-ion batteries in series) or 9V (six 1.5V batteries in series) power source or get a buck converter (they're a dime a dozen at the usual places).

Oh and one last note: I'd put a 100 Ohm resistor also between the Arduino's PWM pin and the MOSFETs. Since MOSFETs are voltage-driven transistors (in contrast to the current-driven bipolar transistors), it won't make the LEDs less bright, but will prevent problems (seemingly inexplicable paranormal activities) in your circuit caused by ringing.

EDIT: I only noticed later that the total current draw you've measured is less than the anticipated one. There are two possible explanations for that: either the LED manufacturer lied about the voltage drops of its LEDs (and they're actually slightly higher than the specs lead you to believe, thus making the LEDs dimmer too), you haven't measured the current using a "true RMS" multimeter or both. Regular multimeters usually measure the peak-to-peak values of the current, divide it by 2*1.414 and display you the value. While this is fine for currents with a perfect sine wave, LEDs (like any diodes) are nonlinear elements whose value can be underestimated with a regular multimeter by 5 to 30%.

Not the answer you're looking for? Browse other questions tagged arduino led pwm or ask your own question.