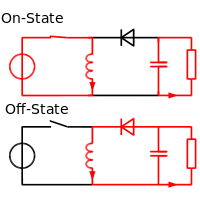 Yes, if your load is isolated you could hook it "backwards" across the output of an inverting buck-boost.

The reason you find non-inverting buck-boost converters is because often the load has to be referred to the same ground as other rails in the system, and you can't connect its ground to the negative rail and positive to the system ground.

For example, suppose you have a microprocessor that runs from a battery. It also needs a 3.3V rail for some I/O. You could use a buck-boost from the battery to generate the 3.3V, but it has to be referenced to the same ground as the battery and the uC. Therefore you need a non-inverting buck-boost.

The non-inverting buck-boosts have the disadvantage of needing 4 switches, or in some topologies a capacitor that has to handle the full load current. (e.g. SEPIC)

Not the answer you're looking for? Browse other questions tagged switch-mode-power-supply boost or ask your own question.

1
Inverting buck-boost vs. positive buck-boost
0
Understandig of boost converter
0
boost converter circuit simulation in LTSpice
4
Does output voltage of a boost converter depend on load current in CCM?
0
Adjustable non-inverting Buck-Boost converter failing right after starting in boost-mode
3
Why does voltage change with load in buck/boost converters?
0
How inverted buck-boost Boosts & Bucks
1
Boost Converter Design Formulas
2
In a buck boost inverting converter is there any difference exchanging the position of the diode from the positive to the negative rail?
4
Why is buck-boost converter showing a different trend than buck and boost in efficiency peaking point?