Why do we need resistors in led

I've researched and it says that resistors limit the current flowing through the LED.

But this statement confuses me because we know that in a series circuit, the current is constant at every point, so how come a resistor can limit the current flowing?

LEDs have a fairly constant voltage across them, like 2.2V for a red LED, which only slightly rises with current. If you supply 3V to this LED without series resistor the LED will try to set for a voltage/current combination for this 3V. There's no current that goes with this kind of voltage, theoretically it would be 10s, maybe 100s of amperes, which would destroy the LED. And that's exactly what happens if your power supply can supply enough current.
So the solution is a series resistor. If your LED needs 20mA you can calculate for the red LED in the example

You may think that supplying 2.2V directly will also work, but that's not true. The slightest difference in LED or supply voltage may cause the LED to light very dim, very bright, or even destroy. A series resistor will ensure that slight differences in voltage have only a minor effect on the LED's current, provided that the voltage drop across the resistor is large enough.

The point is a LED is a diode anyway and diodes have very small internal resistance (in "forward" direction of course), so unless there's something else in series the overall resistance is very low and the current is barely limited and this barely limited current can damage the LED and overload the circuit that powers it.

So yes, you're totally right that the current is the same in each point of the circuit when elements are connected in series, but when you add a resistor you increase the overall resistance of the series and this decreases the current.

Always with the complicated answers ;-). Look at it this way. What happens when you put a wire across the terminals of a battery? In a perfect world you get infinite current which melts the wire. We call this a short curcuit. Because diodes are designed to have minimal forward resistance we get the same effect as a short. Put a resistor in there to provide something to resist against current to limit it down from infinity

To achieve the requirement you could place a reducing valve in the circuit to drop most of the pressure and to limit the flow. The valve worked to drop a certain amount of pressure across it at a given flow rate and as adjustable. (This is about how many rel water valves do work).

You could place the valve ANYWHERE in the circuit and it would achieve the desired result. It could be at the pump inlet or exit or at the motor exit or inlet or anywhere in either pipe.

This is a close analogy to you LED question. The current needs to be limited as it is too high without a limiter. The limiter may be placed anywhere in circuit.

With the Battery - resistor LED circuit

The LED has a certain defined voltage drop at a chosen current.
To be specific lets say that at 20 mA the LED drops exactly 3.00 Volt. This is typical of some modern LEDs.
If we wish to run the LED at 20 mA we MUST arrange for it to drop 3 V - not more and not less.
If we wish to use a 9V supply to operate the LED we N=MUST "get rid of" 9-3 = 6B somehow.
The resistor does this.
To drop 6V at 20 mA the resistor needed is R = V/I = 6 / 0.02 = 300 ohms.
In this example a 9V battery + a resistor + an LED will operate at 20 mA. The resistor can be placed before or after the LED. The current is dropped across it in either location.

Let's focus on what is important here: The LED (which is a diode) characteristic curve. Please look at this image from wikipedia. As you can see, for positive voltages across the diode its current increases exponentially. Imagine now you connect your LED to a power supply without resistor. You would have to set the exact voltage across the diode to get the exact current you need to light up the LED. If for any reason your power supply increases a little bit above the voltage you need then the current will be exponentially higher than before which may (it will!) damage your diode. So, how can a resistor help us with this problem? FEEDBACK! One of the most important concepts in electronics! Let's go back to our example, and add a resistor in series with the diode and the power supply. Now, everytime your power supply exceeds its nominal voltage the diode will increase its current exponentially again, but because the current got higher the voltage across the resistor will be higher too, which means, the voltage across the diode will decrease, compensating the power supply voltage increase.

An LED is a diode made from a semiconductor material which generates photons of light when current flows through the material. The more current through the LED, the more light the LED will emit, the brighter it will be. However there is an upper limit which is the amount of current sufficient to damage the LED.

An LED offers little resistance to the current flowing through it. Most of the little resistance it offers comes from the energy lost from the emitted light and the photon generation is so efficient that the resistance is pretty negligible. However as current increases, increasing the amount of light, the LED will at some point fail because the amount of current going through the LED causes material failures. With sufficiently large amounts of current, catastrophic material vaporization may result in what amounts to a small explosion within the LED exterior envelope. With the lower current levels found in 3.3v or 5v digital circuits the most likely result is the semiconductor material fails and stops conducting and the LED no longer glows.

How does circuit voltage affect the current draw of an LED? Since an LED is a type of diode, the Shockley diode equation describes the current a diode allows at various levels of voltage. The equation shows that the results of the Shockley function for a given range of voltage follows an exponential curve. This means that small changes in voltage can make large changes in current. So using an LED in a simple circuit whose voltage is higher than the LED's Forward Voltage risks having the LED draw surprisingly more current than its recommended levels resulting in LED failure.

So the idea is to engineer the LED circuit so as to limit the amount of current flowing through the LED. We want to balance out having enough current to cause the level of brightness desired without having so much that the LED material fails. The most common method of limiting current is to add a resistor to the circuit.

An LED should have a data sheet that describes the LED's electrical characteristics and tolerances. For example see this data sheet Model No.: YSL-R531R3D-D2.

The first characteristics we are interested in is (1) what is the maximum current that the LED can sustain before material failure is possible resulting in LED failure and (2) what is the recommended current range. These and other Maximum Ratings for a typical standard red LED (different LEDs will have different values) are in a table as duplicated below. 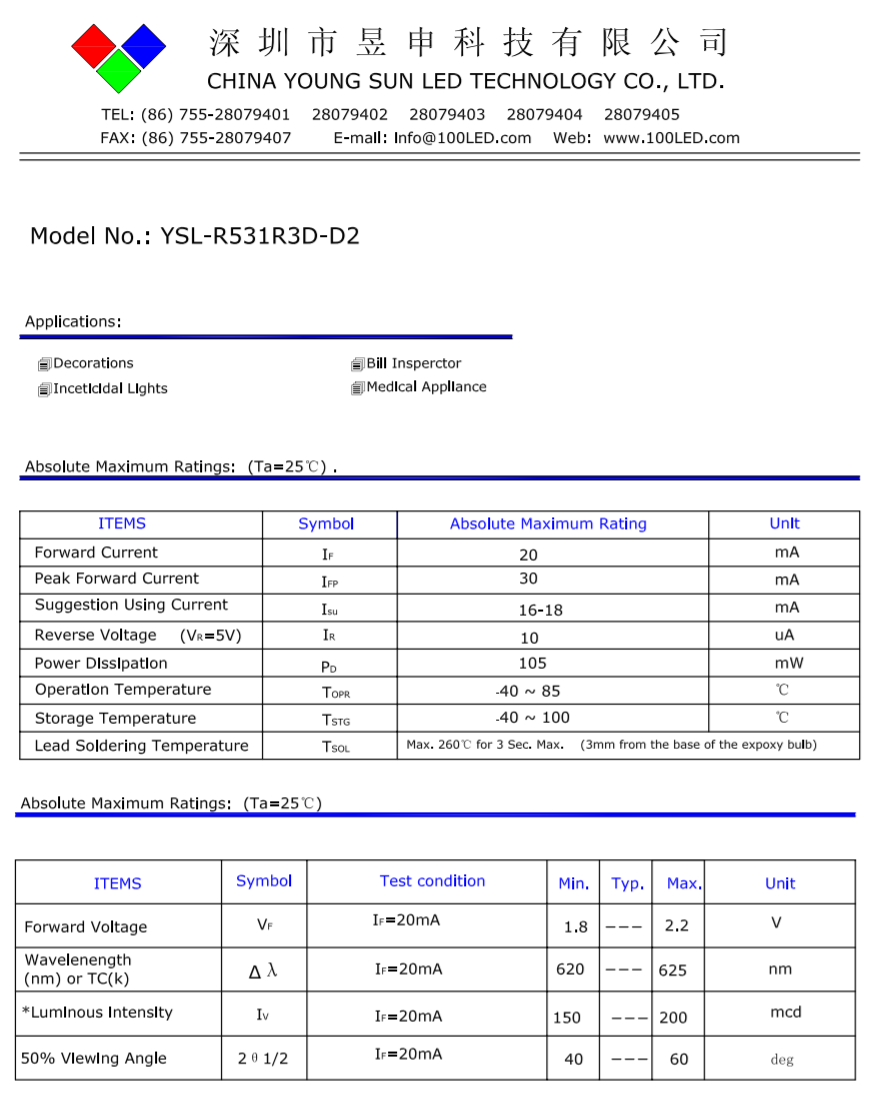 If we were to use this LED in a circuit with 2.2v and a current of 20mA then the LED will dissipate 44mW which is well within our power dissipation safety zone. If the current changes from 20mA to 100mA the dissipation will be 5 times greater or 220mW which is well above the rated 105mW Power Dissipation for the LED so we could expect the LED to fail. See What happens to my LED when I supply too much current?.

To reduce the current through the LED to the recommended levels, we will introduce a resistor into the circuit. What value resistor should we use?

We calculate a resistor value using Ohms Law, V = I x R. However we will make an algebraic transformation because we want to solve for Resistance rather than Voltage so we instead use the formula R = V / I.

The value for I, current in amperes, is fairly obvious, lets just use the recommended minimum of 16mA or .016A from the LED data sheet in the transformed formula. But what value should we use for volts, V?

So why is a resistor value such as 200 ohms commonly used when the calculations indicate 69 ohms?

Simply ,the led have a low resistance ,if connected to a battary alone the current flowing through it will be very high (I=V/R) , high current means more dissipated power in the small led's resistance, which leads to burninng the diode (thermally), because the material have very low heat transfear constant .

1
Does a led determine itself current load?
110
Why does a resistor need to be on the anode of an LED?
79
What is "forward" and "reverse" voltage when working with diodes?
6
What happens to my LED when I supply too much current?
0
LED current quandary
0
Circuit with LEDs, SW520D switch and TP4056

4
How do current limiting resistors work between ICs?
0
Does this RGB LED really need 220 ohm resistors per color?
1
Why can people touch high voltage?
0
how to determine resistor value calculation for common anode 7-segment display multiplexed
1
Sparkfun using 500Ω resistor on circuit with 9V battery and 2V/0.018A LED
2
Parallel circuit with LED on one path and resistor on the other
2
LED strip built-in resistors too large?
0
A battery with zero internal resistance connected to identical resistors in parallel