How does this circuit automatically oscillate at the microblower's resonant frequency?

I'm in dire need of assistance with answering this question. I've exhaustively searched for hours only to find little. There's lots of answers here, but none that specifically answer this question. The question is: How does this circuit both find and automatically resonate at the microblower's resonant frequency? 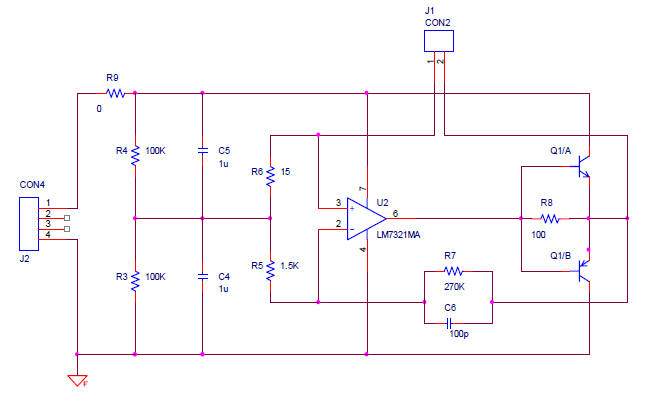 The closest answers I could find were in the patents of the driver circuit, and in this link (How to control the driving frequency when working with high power ultrasonic transducers). I understand that the op-amp is a rail-to-rail one, and both Q1A and Q1B make up a BJT transistor in a half-bridge type circuit; but I don't understand what the RC circuit does as well.

I'm a complete newbie with these things, so a thorough explanation would be greatly appreciated please!

I assume the "microblower" (what is that?) is connected via the J1 connector? If so, then the the microblower is series resonant at it's operating frequency, and is providing positive feedback to the amplifier at that frequency. I assume that there is little or no DC continuity through the microblower.

I assume you know how a crystal oscillator works and how an Astable Multivibrator works. In this case it operates more like an RC Astable Osc with hysteresis.

This microblower has similar characteristics of any crystal or resonator except bigger with the Series Motional Capacitance. I do not have any parameters for it. They all have an equivalent series and parallel resonant frequency due to a series motional capacitance which is very small (<1pF) in resonators used for stable clocks but very large C value when designed as a piezo pump. The series equivalent reactive elements in a crystal can be lumped as (Cs L Rs)//Cp equivalent circuit. The anti-resonant 180 deg phase shift for parallel resonance is not used here and is not discussed further but is common to CMOS clocks.

In order to pump high reactive power into the piezo device at a relatively low frequency to pump a fluid , we need an "Astable Multivibrator" equivalent circuit. This is often done with hysteresis and negative feedback for DC bias or positive feedback with AC coupling. In either mode the conditions for oscillation must be met and in this case the relaxation effect is the movement of the pump which has some interface series resistance and motional capacitance and leakage resistance. We can neglect the series equivalent inductance here.

The primary sources of relaxation oscillation are your R6 which effectively sense and limits current to the pump and the ReqCeq of the piezo pump.

The -ve feedback loop in this case sets the gain and the threshold level of hysteresis for the +-ve feedback signal to cross after decaying to >5T depending on gain ratio. When the pump current sense voltage drops below this fixed -ve input offset threshold, the output toggles along with the fix Vin- threshold.

I created a simulation using +/-10V where the R ratio 1.5k/270k= 55mV. This is the target threshold of hysteresis for this relaxation oscillator design.

This may give a longer stroke pump with 6T or more RC decay to 5.5% threshold of peak. We expect displacement to be the 2nd integral of motor current. I estimated the internal micropump ESR to be 1 Ohm, but it may be much higher, which of course affects the resonant frequency.

I hope you can figure out the rest on your own. My assumptions for the micro pump were 1 ohm and 1uF , but you can change these values in my simulation at any time. (left click edit in java simulation link above) 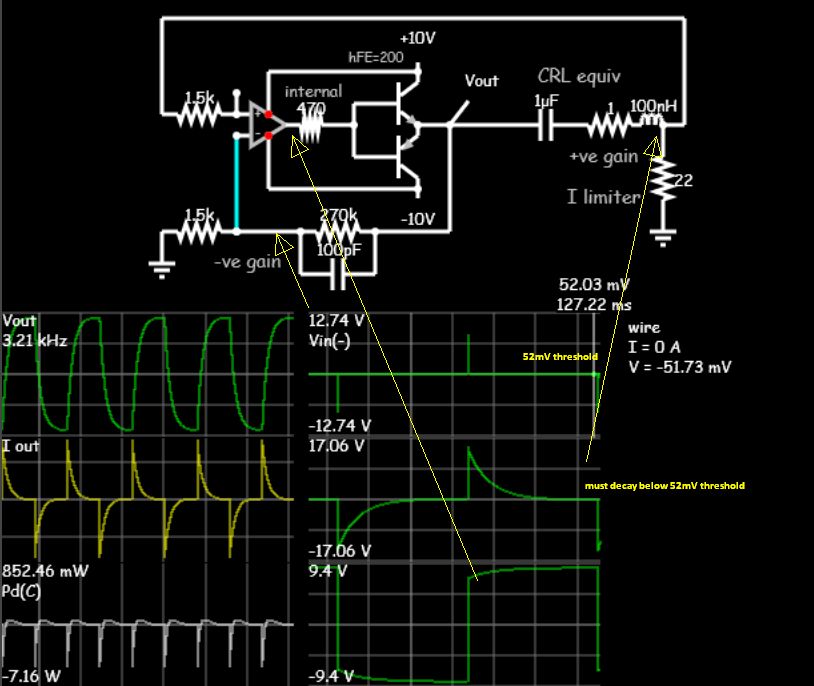 The formula for f period will be the exponential decay of T=(R5+Rc)C Blower on the positive feedback loop to the threshold defined by the negative feedback loop where it is shown by your example to be <1% Thus RfCf time constant must be much shorter than the oscillating period. <<10% to then become irrelevant. Op Amp must be capable of a large swing as well as high current, not common in Rail-Rail Op Amps , so the 470 Ohm output R of my simulation may be as high as 3k for some Op Amps and a CMOS or half bridge output may be better as this limits current pump thru high hFE transistors.

I derived this (verified by simulation), for Rs=ESR and C of piezo and R= R6+Rs then H=R5/R7 is the hysteresis level, which in linear circumstances (not here) would be Av-. and k ideally would be 1/2 but due to switch losses drops to k=0.27

The conditions to be satisfied are;

Here's another SIM with different values and a Gain pot. Note if Cf gets too large, it wont oscillate from above criteria.