I know how to find transfer functions of op-amp circuits using equations derived from using Kirchhoff's current law (nodal analysis), and normally I don't have any problems solving them. However, I came across a design of a circuit that very closely resembles a type 2 compensator, with one difference - there's an extra resistor between the voltage divider and the feedback impedance.

This circuit is used in a switching regulator, so Vout is fed to further electronics internal to the IC, and Vin is the regulated output voltage feedback of the system. 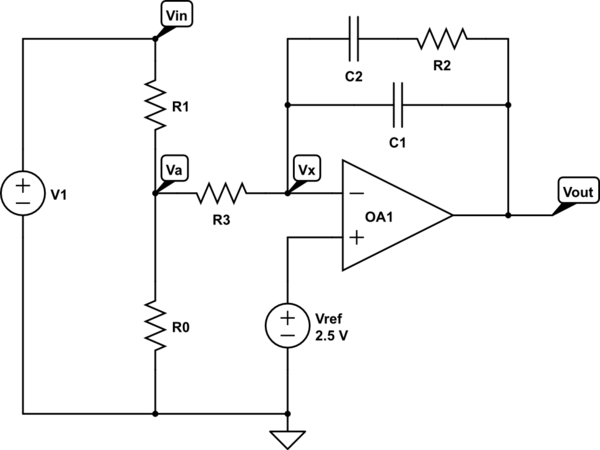 When I use nodal analysis to solve this circuit, I always end up with an extra constant term in the equation, making me unable to get a Vout/Vin relationship.

The simplest equation I can get looks like this:

and where Zf is the feedback impedance consisting of C1, C2, and R1.

The problem I encounter is with the Vx term. I'm not sure how to get the transfer function Vout/Vin from this equation. In a normal type 2 compensator, R3 isn't there. My algebra might be off a bit, but I double checked a few times and don't see any problems. Even if the algebra was off somewhere, I expect Vx would still show up.

Any help would be greatly appreciated. And, to be clear, this isn't a homework problem.

A contribution: Using the Thevenin's Theorem it is possible to transform the circuit to a simpler one: 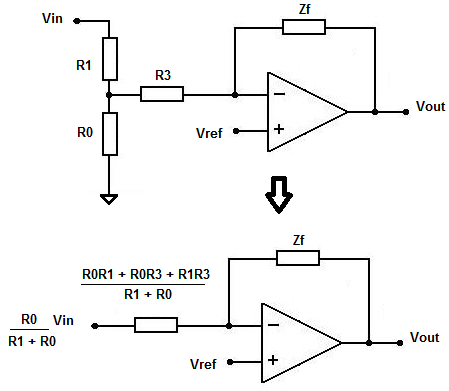 Using the superposition principle, the output \$V_{out}\$ is:

You can't get a transfer function in closed form relating \$V_{out}\$ and \$V_{in}\$. This situation is similar to what happens in control systems, when the plant has two inputs: Reference and disturbance. In that case, the principle of superposition can be used, resulting in two separate transfer functions: one relating the output to the reference input and the other relating the output to the disturbance input.

However, assuming that \$V_{ref}\$ is constant, a transfer function related to input with the output can be obtained, considering the ratio between the variations of these quantities (linear relationship):

This circuit represents a type 2 compensator, featuring a zero and an origin pole. I can obtain its ac transfer function using Thévenin as previously detailed:

If you develop, you will obtain a moderately-complicated high-entropy expression: you won't see where the gain, poles and zeros are located and trying to express the result in a clear and ordered form will require some extra energy. However, nothing insurmountable here. If you do the maths ok and rearrange, you should get

We can also determine this transfer function using Fast Analytical Circuits Techniques or FACTs especially if we want to consider a non-infinite open-loop gain that I call \$A_{OL}\$. I start by calculating the dc transfer function for \$s=0\$ which means I open all capacitors:

I will now determine the resistance "seen" from capacitor \$C_2\$ when \$C_1\$ is placed in its high-frequency state (a short circuit). This resistance is simply \$R_2\$. The second-order coefficient is then determined by

The denominator \$D(s)\$ is then equal to \$D(s)=1+sb_1+s^2b_2\$. The numerator is immediately found by inspection: what condition in the transformed circuit (in which caps are replaced by their impedance definitions) would prevent the excitation from producing a response? Otherwise stated, when \$V_{in}\$ is tuned to the zero frequency, what condition can produce a so-called output null \$V_{out}=0\;V\$? If the branch made of \$C_2\$ and \$R_2\$ is a transformed short circuit. In other words, the root of this series impedance is \$s_z=-\frac{1}{R_2C_2}\$. This is it, we have our transfer function including the impact of the op amp open-loop gain equal to:

If I now consider the low-\$Q\$ approximation (\$Q<<1\$), the second-order polynomial form can be replaced by two cascaded poles placed at \$1/b_1\$ and \$b_1/b_2\$. If you develop everything, rearrange and consider \$A_{OL}\$ approching infinity, then you should find the following nice low-entropy form:

This is truly a low-entropy form featuring an inverted zero in the numerator.

The dynamic response of this circuit is shown below

As you can see, we have an excellent agreement between the expressions.

The FACTs are truly unbeatable in terms of execution speed. You obtain a low-entropy format very quickly (a format in which you see gains, poles and zeros immediately). If you are interested - and I encourage you all to acquire this skill - please have a look at

Also, do not neglect the op amp loop gain and its internal poles when you shoot for a high crossover frequency. Check out this paper published in http://www.how2power.com/newsletters/index.php recently, you have more details than in here:

Not the answer you're looking for? Browse other questions tagged operational-amplifier control-system transfer-function feedback compensation or ask your own question.