I just setup a pepper seed starting shelf using a metal shelf from a Swedish furniture outlet. The shelf has no electrical contact with the 5x T8 bulbs which are hanging on plastic zip ties. The T8 bulbs do not have a ground connection, and are isolated from their own chassis. At the very bottom, I have a small box, which uses a 12V DC LED strip powered from an external power supply (xbox 360 12V brick), for the sprouted seedlings. I was testing if there is any leakage from anywhere using a multimeter and before I even installed the "sprout box" I had about 10V/AC from the shelf in respect to the earth wire in the wall outlet. I thought that was bad and grounded the shelf to earth, although electrically isolated from everything, and the voltage disappeared. Now recently after adding the "sprout box" I noticed when touching the wires leading to the LED strips, I get a light "zing" when touching the shelf. Between the xbox 360 PSU and the metal shelf is 210V/AC!!! So I checked how much current can flow and I'm seeing about 80µA, which lights an LED very dimly.

Is this something I should worry about, as it only happens if I touch the LED strip power leads?

How comes I have such crazy floating voltages? all from induction?

Should I ground the xbox psu too?

p.s. the xbox psu doesn't have an earth connector, only live and neutral.

p.s. the psu in question is an xbox 360 power brick Here is an excerpt from the link Jack Creasey suggested below

This is perfectly normal and the reason why metal furniture is tricky. Your shelf is at earth potential while your Xbox PSU has no earth connection, which is why its GND is floating. This means both its live and neutral wire are connected to GND by a Y class capacitor in the filter circuit. As long the current is only a few 100µA, that's ok by design. It may be unexpected though. 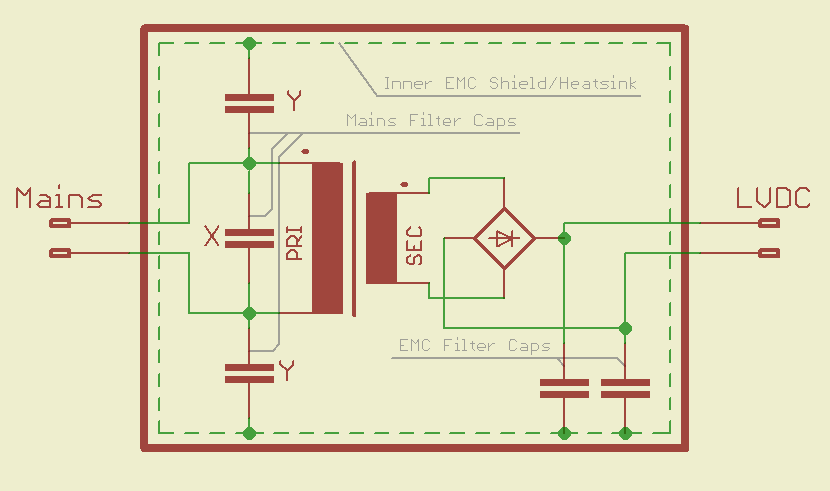 This (roughly) is the schematic of a LVDC PSU with the common filter caps. The Y capacitors are pretty useless when you are having no earth connection on the mains side but PSUs may come with or without earthed plugs due to local regulations so you can assume the Y caps are there even when there is no earth. This causes the inner shield to float at half of mains voltage at a very high impedance.

On the low voltage side, there may be also caps connected to the inner shielding which causes the "half on mains" voltage to be displaced on the DC lines.

For medical devices this is often not acceptable so there are regulations which force medical PSU suppliers to reduce the Y capacitance (even when there is earthing) and add a big choke coil instead for proper mains filtering.

If you are using an Xbox power supply with an IEC connector like this: 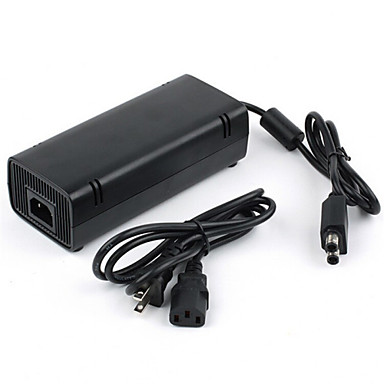 As one comment pointed out the picture is one of the two pin plugs. But you may have a 2 pin or 3 pin supply depending on where in the world you are and what local regulations were conformed to for the supply. There are also variants for what motherboard is used (which varies the connector). There are over 6 variations of power supply when you consider mains plug (2 prong/3 prong) and motherboards.
You can tell the PS connector/motherboard version apart using this:

Read this if you are unsure: http://support.xbox.com/en-US/xbox-360/console/power-supply

The only way to get a (mains) high voltage on your shelf is for there to be a leakage path from the mains side to the output. This could be the results of:

You should be able to measure the voltage between the PS output (+12 Gnd and +5SB) and the wall supply mains neutral and earth pin to establish is there is a power supply problem.

It's also worth noting that the Xbox 360 power supply is never off. Although you have to short +5SB to Gnd to get +12 V....in the off condition it actually outputs >3 V to test if the motherboard is shorted (Standby).

Not the answer you're looking for? Browse other questions tagged voltage floating or ask your own question.