Why does the voltage divider in second circuit (middle) has no impact? Vo is always equal to V4(correct me if am wrong).

Roughly speaking, your schematics can be reduced as follows. The top schematic is as you laid them out (with just a little less "dross" to confuse things.) The schematic below each is the equivalent, reduced version using a Thevenin equivalent for your resistor divider. 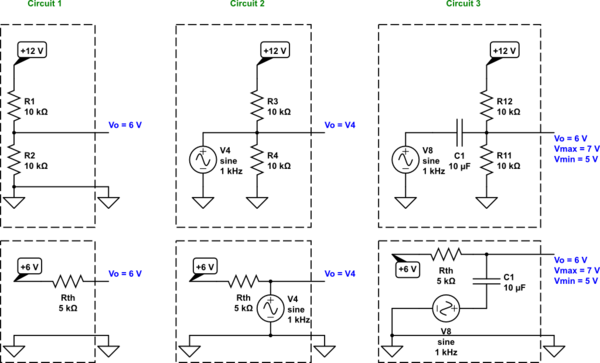 It's a little more obvious, now.

Circuit 1, of course, exhibits \$6\:\textrm{V}\$ when the output is unloaded. The Thevenin source voltage simply appears at the output, since there is no current in the Thevenin resistor.

Another way of viewing Circuit 3 is that \$R_{11}\$ and \$R_{12}\$ form a voltage divider with \$6\:\textrm{V}\$ in the center and that \$C_1\$ will develop a voltage across it equal to the average difference. It charges up for a bit, while that happens, and so for a short time (several times the \$C_1\cdot R_{TH}\$ time constant) there will be an imbalance. But that imbalance will be just what's needed to charge up the capacitor until it reaches that equilibrium point where the charge leaving equals the charge arriving and the mean value then no longer changes.

The key factor here is that the signal generator has an average output voltage of zero.

Not the answer you're looking for? Browse other questions tagged transistors bjt voltage-divider bias common-emitter or ask your own question.