How to know if a multimeter is defective?

One of our service engineers asked me(or tested me) how to know if an analog multimeter is defective without measuring any current, voltage or resistance. Just by looking at the device itself. Do you have any thoughts about this?

I'm not aware of any way to tell that a multimeter (digital or analog) is defective just by looking at it - other than obvious physical damage such as a broken case or obviously overheated connectors or other signs of overheating.

You can detect certain faults by looking at the needle of an analog meter. It should be on 0 and respond to the adjustment screw and should be centered with respect to the dial. The front spring if visible should unbroken and appear to be in good condition. The needle should also not move much if the meter is moved gently from side to side and should return to 0 when you stop moving it.

You can set the meter to measure resistance, short the leads together and use the ohms adjustment to adjust the reading to full scale. If the needle goes towards full scale you can tell that the meter movement is not damaged. If the needle moves towards zero ohms but you can't get it to zero ohms (full-scale for the V & mA) the battery is likely about dead. That is a little more than just looking at the device itself, but it doesn't require anything but the meter. I can not remember the last time I used the ohms scale on the meter below, so the battery is nearly dead.

You should also zero the meter (infinity for ohms) without the leads shorted. The zero screw should be near the center of the movement. 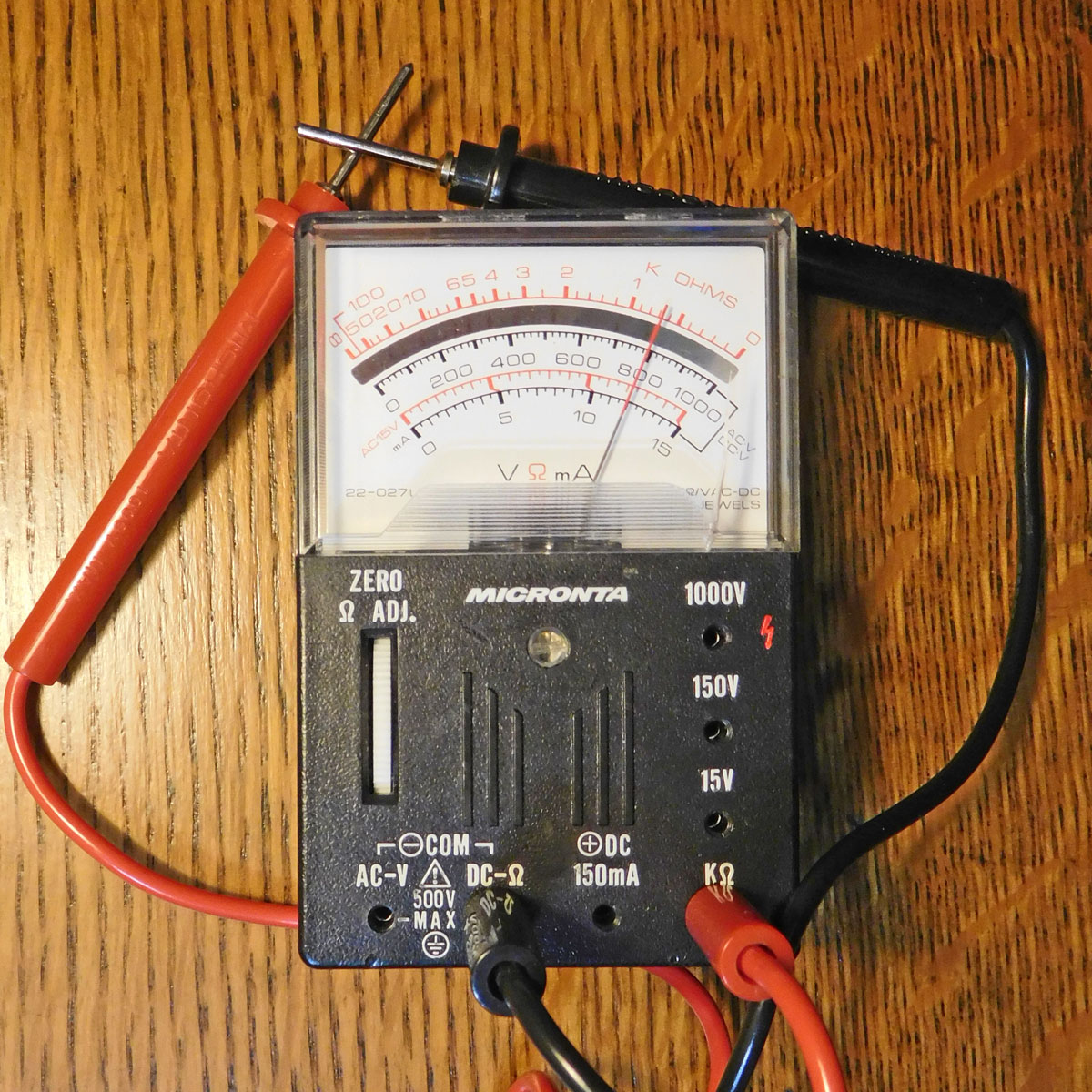 Meter movements are physically a bit fragile. If the meter cannot be zero'd (usually there is a screw located at the center of rotation of the pointer which adjusts the hairspring rotation) then it is damaged.

It's also possible to damage the meter bearings (aka jewels) if it is an older type with such bearing or the suspension (usually taut band - metal ribbons- in modern movements) or bend the pointer by physical or sometimes even electrical abuse. If you move the meter around and the pointer moves but does not return to the original position (hysteresis) then it is sticky for some reason.

Sometimes these things can be repaired- for example if the hairspring turns are touching they can be carefully adjusted with electronic-grade tweezers).

So you can see certain common faults. Of course there are many things that could be wrong with the meter that you would not be able to see visually from the outside.

Incidentally, there is a compromise in analog meters between sensitivity and ruggedness. Ideally, for ruggedness, a meter movement would be some mA or more full scale, but for an analog multimeter (without internal amplifier such as an 'FET' type) you want the meter to be as sensitive as possible. A typical post-WWII meter was perhaps 20,000\$\Omega\$/V (you might recognize the units as the reciprocal of current) so the full-scale meter movement current was 50\$\mu\$A.

Not the answer you're looking for? Browse other questions tagged voltage current analog resistance multimeter or ask your own question.

3
different current readings with a multimeter between the 200 mA and the 10 A slots
1
What tests for a defective IC may be done with only a multimeter?
0
How does a multimeter convert voltage/current to a numerical value?
2
Can current still be (alternatively) measured with a blown multimeter fuse?
2
How can you measure low resistance accurately?
1
Have I damaged my multimeter by applying voltage in resistance mode?
1
Multimeter current measurement: internal resistance or input impedance specification
0
Resistance reading on digital multimeter
0
Wrong Multimeter connection / floating ground