It's been a while since I've looked at the recent Microchip processors & I've been trying to learn a little bit about the PIC32 MIPS instruction set. I noticed there are two sets of branch instructions; the programming guide says this:

By convention, if an exception or interrupt prevents the completion of an instruction in the branch delay slot, the instruction stream is continued by re-executing the branch instruction. To permit this, branches must be restartable; procedure calls may not use the register in which the return link is stored (usually GPR 31) to determine the branch target address.

Could someone clarify what they're saying here? Do they differ in the # of CPU cycles taken in each case?

I'm used to the branching architectures of the 8- and 16-bit PICs ("branch skip") where you either execute or jump over an instruction (this sounds like Branch Likely), and I'm used to the branching architecture of the TI C2000 DSPs (where all you get is a branch or branch conditional to an address). But I don't quite understand how to map the MIPS branch instructions onto my existing knowledge.

MIPS is one of several RISC (reduced instruction set computers) architectures that are designed to execute one instruction per clock cycle. In order to achieve this, the original MIPS processors had a five-stage pipeline: 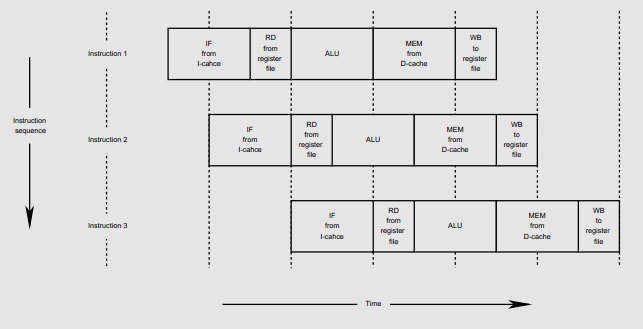 The abbreviations are in the above figure are: IF (Instruction Fetch), RD (Read from register file), ALU (Execute instruction in Arithmetic Logic Unit), MEM (Read/write Memory access), WB (Write back to register file). The vertical axis is successive instructions; the horizontal axis is time.

Because the MEM stage occurs after the ALU stage, RISC machines like MIPS don't do arithmetic or logical operations on memory, but only on registers. For this reason they are also referred to as load/store architectures.

There are several hazard conditions where the pipeline can stall and cause a penalty in the over instructions per cycle (IPC) value. A data hazard occurs, for example, when an instruction attempts to use data in one of the registers before it has been loaded into the register. For example:

The MIPS designers were counting on compiler writers to write clever enough code generators to handle this efficiently. However many do not (including Microchips C32 compiler, based on GCC), and just put NOP's after every branch, wasting both code space and cycles.

So in the R4000 architecture, MIPS added Branch Likely instructions which still always fetch the instruction after the branch from the instruction cache, but only execute it if the branch is taken (opposite of what one might expect). Compilers can then always fill the branch delay slot on such a branch.

can be turned into:

However as it turns out, trying to include this feature in high-performance designs has been a pain in the neck due to the complexity in getting rid of the result of the ignored instruction. Therefore it has been deprecated.

Not the answer you're looking for? Browse other questions tagged assembly mips or ask your own question.