What's the difference between MOSFETs and BJTs (from a circuit analysis perspective)?

When analyzing circuits with transistors in them, when does it make a difference whether they are MOSFETs or BJTs?

From the design standpoint, the main and most evident difference is the base current: as Russel said, the bipolar is current-driven, which means that the current flowing into the Collector will be proportional to the current flowing in the Base (and the Emitter will output the sum for the KCL); the MOSFET instead, has a very high Gate impedance, and just putting a voltage higher than the treshold will activate it.

The bipolar transistor has a fairly constant current gain, \$ h_{FE} \$, which gives a linear response while the MOS has a quite complex response (quadratic with Vgs in saturation, depending on Vgs and Vds in "linear").

At the other hand, its fixed gain may be insufficient to use it as a switch, where a low-power input is used to turn on a high-current load: in that case the Darlington configuration (two cascaded BJTs) can help, but MOS doesn't have this problem because its current gain is virtually infinite (no Gate current as we said).

Another aspect that may be relevant is that the MOS, being controlled by charge in the Gate, doesn't like it to be floating (not connected): in that case, it's exposed to noise, and will result in an unpredictable behavior (possibly destructive). The BJT, requiring a base current, is more robust in this sense.

Usually BJTs also have a lower threshold (around 0.7 V vs 1+ V for the MOS) but this is very dependent on the device and does not always apply.

It really depends on the type of circuit and voltage levels you are dealing with. But generally speaking, a transistor (BJT or FET) is a "complex" component (by complex I mean, it is not a resistor, a capacitor, an inductor nor an ideal voltage/current supply), which means from a circuit analysis point of view, that you should first pick the right model for the transistor, i.e, a circuit made of non-"complex" components that represent the behavior of the transistor (google for Hybrid-pi model), in order to analyze it. Now if you look at both, BJT and MOSFET models you will be able to quantitatively compare them and understand the differences. The way you pick the right model depends on different factors, namely:

(just to name a few)

Check some of the posts about transistors here in the forum, (for instance David Kessner's)

In analysing circuit this will make difference because the electrical equivalent model of BJT is different than FET because as they talk before the characteristic of BJT is not like FET .

As tou can see from this picture 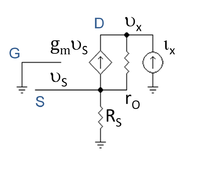 And this is due to the huge input resistor of FET .

By the way if we use a non favourable configuration the input resistor my become small as what happen when we use common gate or common base.

Not the answer you're looking for? Browse other questions tagged transistors analysis or ask your own question.

24
Explain what is a transistor in plain English!