My inkjet is about to run out of ink and I'm thinking of buying a laser printer to print the transparencies.

2 prints of PCB cut aligned and glued to each other > Pr-Sensitised PCB exposure > development and etching.

In general with the Inkjet I print several times on the same sheet and any offcut can then be attached to a paper A4 sheet for printing later on, minimal waste.

My concern in buying a laser is the heat and the possible warping of the transparency especially running it through several times.

Am I better of sticking with the inkjet due to the warping of the transparency that the laser can/could cause?

I included a pic to show that all these three PCBs were done in multiple print runs with one A4 transparency sheet on an inkjet. I don't know but I don't think I can do the same with a Laser printer. 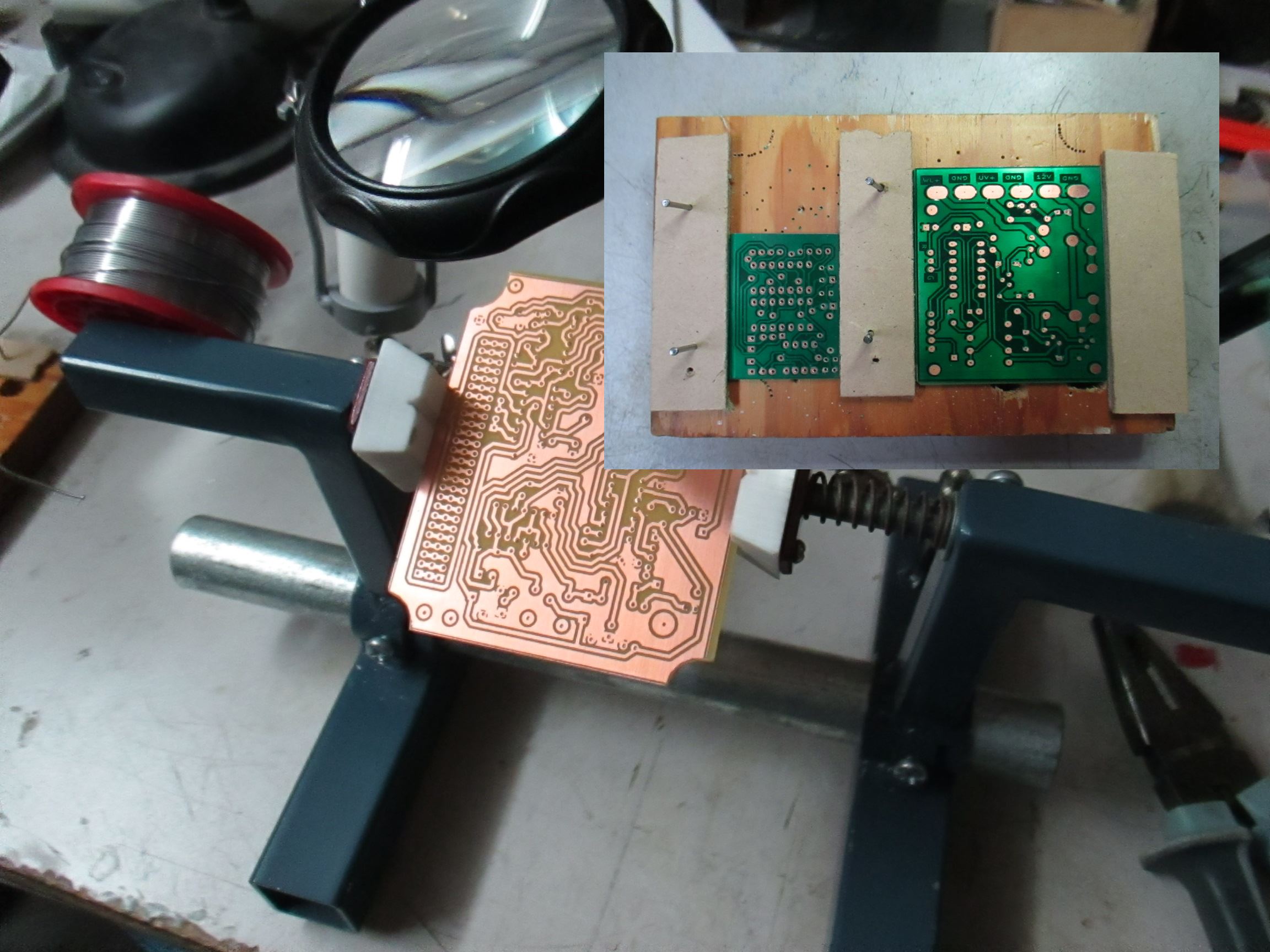 Thanks all, but it seems lasers are to finicky. Right laser, sourcing and using the right transparency, then in future if I try to use the transfer method on non pre-sensitised boards it has to be the right toner for transfer.

One mistake or fault and cost of repair could be a nightmare. For the cost of repair/parts of a laser I can buy a dozen cheap new multifunction ink-jets that will last me 5+ years.

It just occurred to me that with a laser and using the transfer method (translucent paper 'crowie') I could just use the laser to create a silk screen then iron it on the PCB. I may see if I can buy a cheap second hand laser. It would be nice to have a cct board with a silk screen of sorts.

First, thanks to all replies.

One, a multifunction for $40 that was a never used spare in an accounting firm. 8 years old but brand new and 90% toner in it (mono). The second for $10 a colour laser with 65% toner in it. Slight scratches on the far left of the drums but for printing A5 transperancies it's perfect. 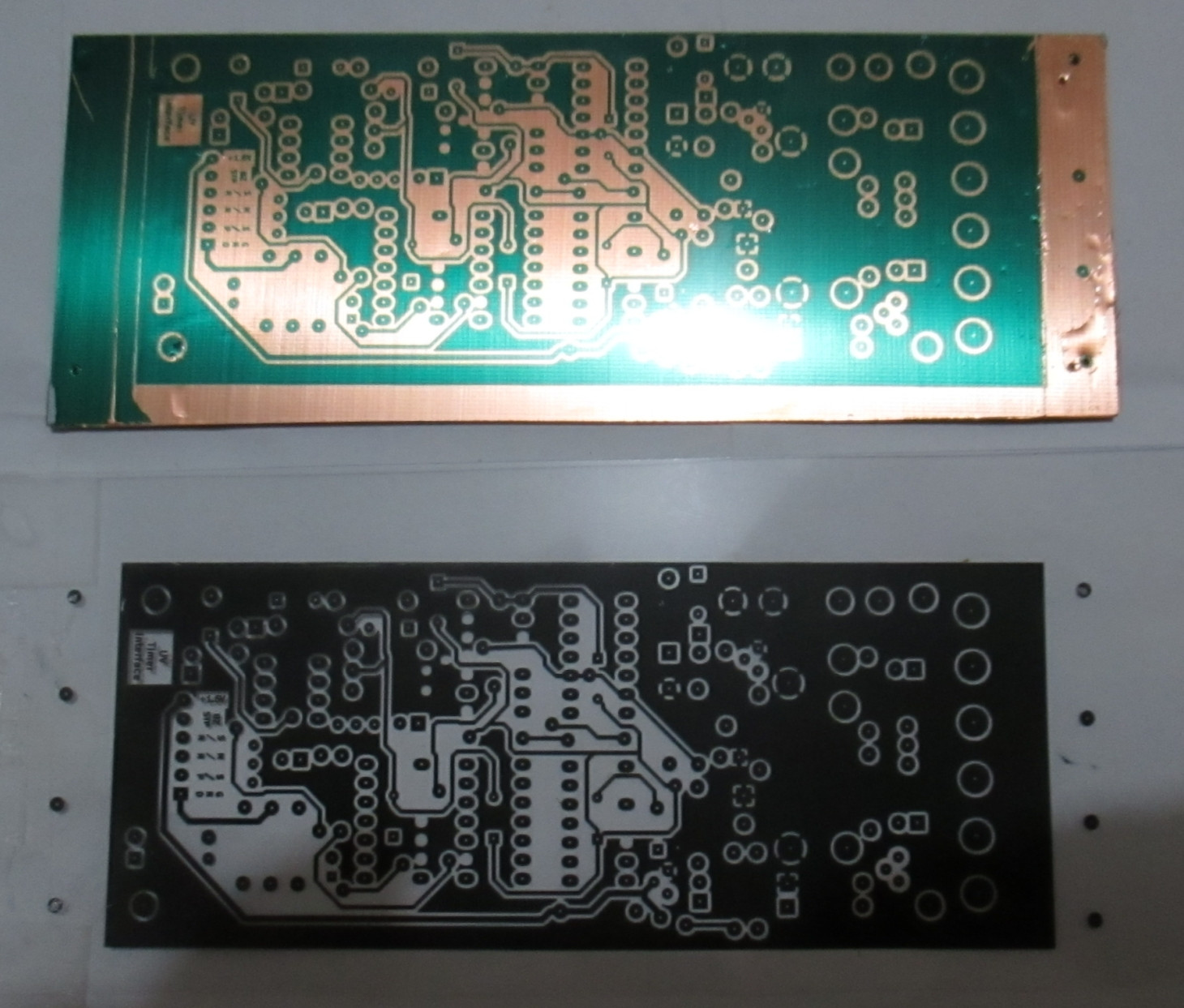 Old desktop pen plotters, such as the old HP 7475A, can work spectacularly well for this purpose, in conjunction with technical drawing pens, and some 3D printed adaptors. Eagle CAD, being old, still has functions to export HPGL.

I've been able to go down to 0.18 mm trace width (~8 mil), and can succesfully do even small 0.5 mm pitch QFNs with relative ease.

The way I do it is by just plotting straight onto (freshly cleaned! else the ink won't stick!) copperclad board with ink, let it dry for a while, and etch. The ink selection is somewhat critical, but cheap shellac-based drawing inks do the job rather well, such as the Koh-I-Noor ones.

If you have a 3D printer handy, using the heated bed as a sort of hot-plate to speed up the ink drying is a nice lifehack.

You only need a black and white laser printer. The cheapest laser printer costs about double that of the cheapest inkjet. The cheapest inkjet cannot reliably work for printing masks, as sometimes there is a fine (0.05mm) gap between consecutive lines (i.e. solid areas are not solid but actually hatched, if looked under a microscope; and this passes UV). Also, high quality expensive ink is required for inkjet, while lower quality cheaper ink gives better result with lasers. Additionally, the laser ink will not dry up at the drop of a hat... it is already dry to begin with!

Transparencies in a laser will not warp if the correct heat setting is used. Any minor warp does not matter when pressed under a glass sheet. I've got 0.1mm traces with not much effort. Keep in mind that laser toner spreads about 0.05mm under the hot rollers, so clearance will increase by 0.05mm. It may be possible to get 0.05mm traces if this spreading is accounted for, and the photoresist film is properly affixed and exposed.

Laser printed transparencies will have to be made darker by going over them with some fine pigment ink (e.g. nano carbon ink from fluid ink refils, or nano carbon fountain pen ink), and then rubbing it off gently with dry soft tissue (2-3 rounds). It easily becomes dark enough to block out the sun when seen with naked eyes. For this, aftermarket lower quality inks may work better due to the lower wax content. I use a slightly higher heat setting.

Not the answer you're looking for? Browse other questions tagged pcb-fabrication or ask your own question.

7
How can I print a grid of PDF PCBs
0
how to print a PCB layout for UV etching
3
Apply etch resist on copper
2
How to attach a paper screen to a DIY PCB?
0
Developing photoresist PCB with UV bank note checker
2
Can I use the toner transfer tecnique to transfer the silk side to the pcb?