What's the role of the transistor in this circuit? [closed] 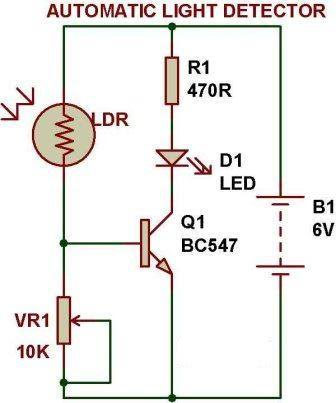 So I have made this circuit for my project. (Instead of that variable resistor, I have used a single 1k ohm resistor)

I know that a transistor can work as a switch and amplifier, but in this circuit, what role is it playing? Please explain in detail? Thanks guys.

Depending on the resistance of the LDR, the transitor may be viewed as either an amplifier or as a switch - and there is not a sharp transition between the two modes.

As more light hits the LDR, its resistance will drop, allowing more base current, and thus collector current. At some point the collector current will become limited by the collector load (resistor and LED), so the transistor will be saturated, with only 0.2 volts or so between emitter and collector.

When we use a transistor as an amplifier, we keep the base current low enough that the transistor will not be saturated.

When we use a transistor as a switch, we want to have the transistor either cut off (no collector current), or saturated (current limited by load resistance).

The transistor won't do much to turn on the LED if it isn't bright enough for the LDR conduct enough current to effectively drop in resistance below 25kΩ, which may be bright daylight.

Any Common Emitter with output on collector is an inverting base current amplifier. With no Re value the gain is high above the Vbe threshold of 0.6V.

If you expected the reverse with the LED coming on at dark, then some inversions and bias changes are needed.

If you want to change the sensitivity to sunrise then a larger value for the 1K shunt to ground is needed.

Not the answer you're looking for? Browse other questions tagged transistors sensor ldr or ask your own question.

0
Will this circuit work using BC 108 transistor
0
NPN Transistor circuit not functioning
1
Old radio amplifier circuit explanation
4
Is this transistor switch circuit designed correctly?
0
Transistor Switch for my Raspberry Pi 3 FAN
0
Use of transistor for switching the led
4
What's wrong with this single-transistor level-shifter?
0
How does this transistor NOT gate work?
0
Understanding the role of a pull-up resistor