Does this sort of “multi lane” switch exist? [duplicate]

Does a component exist that functions as a switch for multiple connections at once, 3 in my case.

Essentially it's like having a 3 switches, one each line and flipping them all at the same time.

The number of ways you can connect those to outputs is a "throw" (T) - Single being ST, double being DT and after that, numbers. 3T, 4T...

Some switches add "center-off." Single-throw switches are "off" one way and "on" the other, while DT are always on in one direction or the other UNLESS they are "center off."

3P DT will do. Input goes to common.

I have some lovely old modem A/B switches that switch all 25 pins (though most do fewer pins, all 25 being overkill for the average modem) so those are 25P-DT 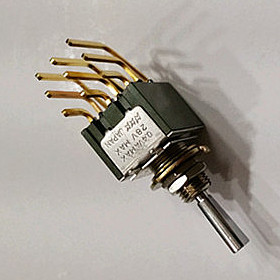 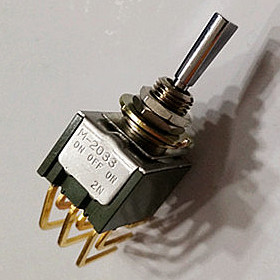 This is the relevant pole & circuit table from the datasheet: 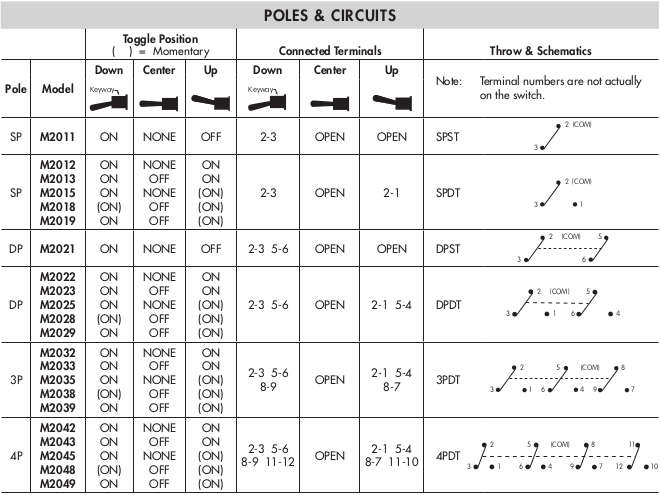 You might only need to switch the data pin, since even with power and ground this will switch data between devices with no harm.

If you really do wish to switch off the bus power too, then leave the ground connected as it is of no consequence (there are even positive reasons to not break and reconnect ground lines)

This would require a "DPDT switch" (2 poles, 2 throws)

To kill all three lines (almost certainly not necessary) then use a three pole two throw switch... but like I say, there's almost never a good reason to do so.

Now, consider whether you need to ask for a three position double pole switch with a "centre off position" ... This would cut the connection to both devices simultaneously.

Unless there is a strong reason not to, I'd go with the SPDT switch on the data line.

Also, bear in mind that switching data on and off whilst the devices are talking may result in errors and bad data... depending on the error correction available on the devices, this data might be acted on - resulting in unintended consequences.

A better procedure entirely is to use a digital switch, these will let you swap data lines cleanly and without mechanical bounce between multiple sources using cheaper switches. With a little extra circuitry you can delay actual switching till a '1' has not been detected on the line for over a threshold period - set this close to your inter-message delay and you'll never be able to 'chop' messages in half. Ask an electronics hobbyist to help with the design of such a digital switch as it requires some thought.

Also, the protocol is important. Some messages might set context for future messages, and switching between devices can result in the wrong registers being written to and potentially stop the device from working, possibly even permanently (called 'bricking')

Whichever way you do this, if the devices are important - it may be advisable to turn off the devices before switching paths, then start them back up again. This isn't always necessary, but devices with complicated configurations and protocols may well benefit from this safeguard.

Not the answer you're looking for? Browse other questions tagged switches components or ask your own question.

1
Toggle Switch to swap the connections of two buttons

5
Which way will I place a momentary Tactile switch in a solderless breadboard
2
Is there an IC with a large number of digitally controllable switches? And if so, how could I control it?
2
Simple SPST Switch Circuit - Pull-down Resistor VS. Current Limiting Resistor
0
Circuit with 2 reed switches (proximity sensors) output to single GPIO
1
DPDT rating combined?
0
Toggle between two usb cords with a 2 pole 2 throw switch
0
Bypass Gate-to-trigger-converter via switching jack
0
Use toggle Switch to Send Keystroke