To divide an input voltage by about 10 as well as reducing the impedance , I came across 2 possibilities: a buffered voltage divider (top) and an inverting amplifier (bottom). 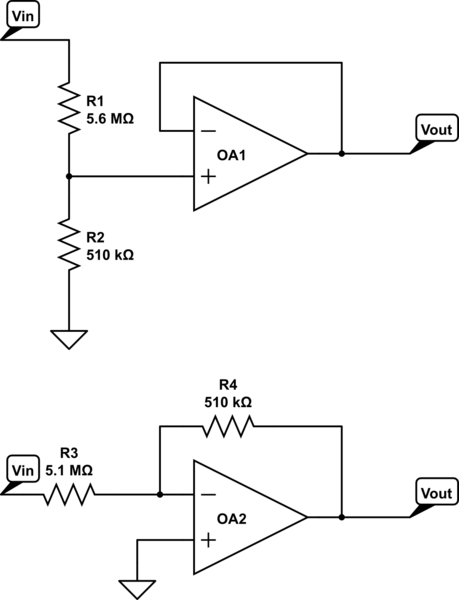 It is not a problem to invert the signal (the input voltage is itself both negative and positive) and both circuits are using the same components, so they look the same for me. What should I consider to pick one of those circuits in my design?

To give a little bit more information about my requirements:

Besides the valuable practical advice above, it is interesting to reveal the "philosophy" behind these dual circuit implementations of a voltage attenuator. I will try to show that there is a close connection between them and the inverting version is derivative of the non-inverting one.

In the conceptual picture below, I have visualized the voltages with vertical bars in red, which height is proportional to the voltage value (in association with a water column). Positive voltages are above and negative voltages - below the zero voltage line (the ground). The currents are represented by closed paths in green. 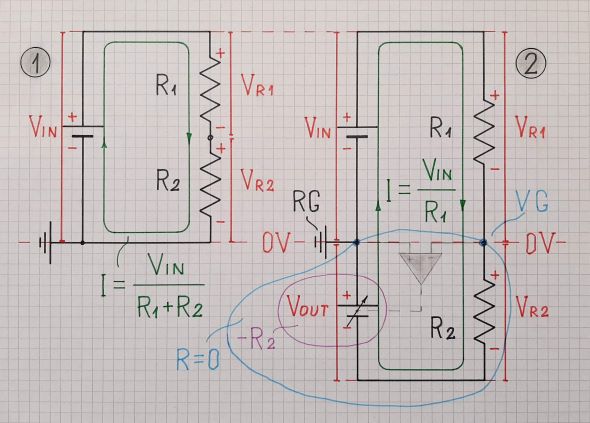 1. Non-inverting voltage divider. The idea of the classic voltage divider is simple - to pass the current through a network of resistors in series and take some of the voltage drops as an output (Fig. 1 on the left). As we prefer a grounded output, we have chosen \$V_{R2}\$ to be output voltage. The output resistance \$R_2\$ is a part of the total resistance \$R_1 + R_2\$; the output voltage \$V_{R2}\$ is the same part of the input voltage \$V_{IN}\$.

2. Inverting voltage divider. But we can do this "magic" by means of electronics. In addition to the classic view of introducing the inverting configuration, I will use a few more unconventional perspectives to show the clever idea behind it.

It seems paradoxical but why not use the total input voltage as output voltage? Then it will be a "reverse voltage divider" which output is input and its input - output. In contrast to the humble passive voltage divider, its gain will be more than 1... and it will be another ubiquitous op-amp circuit - non-inverting amplifier. So we can think of the non-inverting amplifier as of a "reverse voltage divider". This is a unique property of the negative feedback - to reverse devices (swap their inputs and outputs).

- Voltage compensation. We can look at another perspective at the humble voltage divider (Fig. 1 in the left) if we realize the fact the output voltage drop \$V_{R2}\$ is responsible for the reduction of input current; so, we conclude, it is undesired. Then let's destroy (compensate, neutralize) it by equivalent voltage \$V_{OUT}\$ (Fig. 2) subtracting it in a series manner (the two voltages are connected contrary in series). To do it, the op-amp continuously "observes" (by its inverting input) the voltage \$V_{(-)}\$ at the upper end of \$V_{R2}\$ and changes its output voltage \$V_{OUT}\$ until zeroes it (the so-called virtual ground appears there).

We are proud that we have successfully eliminated the undesired voltage... But now we remember this was our output voltage.. we needed it... but we destroyed it... Then what do we do? Where to take an output from? Fortunately, there is a "copy" of this voltage... inverted but buffered and grounded... and we take it as output voltage.

- Negative resistance. We have solved the contradiction above (\$V_{R2}\$ was both useful and undesired) in terms of voltages. We can do it in terms of resistances if we realize the fact the op-amp output behaves as an equivalent negative "resistor" with resistance \$-R_2\$. Why? In contrast to the ordinary "positive" resistance \$R_2\$ that subtracts its voltage drop \$V_{R2}\$ from the input voltage, the op-amp adds the same voltage to the input voltage.

So, in this configuration, two equal but opposite resistors are connected in series... and the negative resistance neutralizes the positive resistance. The result is zero resistance; the network of both elements in series behaves as a piece of wire. Only the other two elements - \$V_{IN}\$ and \$R_1\$ remain in the circuit... and only they determine the current \$I = V_{IN}/R_1\$...

- Resistor summer. Also, we can think of this arrangement as of a "shifted voltage divider" since another voltage source is inserted between the lower end of \$R_2\$ and ground. And what is better, we can recognize another ubiquitous passive circuit - the resistor voltage summer. It adds two grounded (single-ended) voltages (here subtracts as they are opposite) and the result is also single-ended voltage referenced to ground. We can find it by applying the superposition principle thinking of the network once as a voltage divider driven from the left and then from the right.

- Tug of war. And finally, if you like analogies, here is a mechanical one. You can think of this arrangement as of "tug of war" where the input voltage source "pulls up" the common point between resistors while the op-amp output "pulls" it down. They do it through the resistors... and none of them succeeds... so the point does not move.

(Indeed, this story has become quite lengthy... but that is the price of understanding...)

I actually had this same question, which led me to this post. Thank you for putting the two cases side by side, as it helped me reach the following conclusions:

Consider a case of ESD (electro-static discharge) from the input side. The buffer case keeps the input and output a bit more electrically isolated, as the Op-amp will fail before letting the voltage spike through. However there's a chance (depending on the resistors chosen) that the inverting topology would conduct the spike between input and output even if the op-amp were to fail.

In terms of gain characteristic, these two should be nearly identical.

Since resistors introduce noise, the inverting topology should be less noisy because the op-amp would share a direct ground with the load.

Not the answer you're looking for? Browse other questions tagged operational-amplifier voltage-divider buffer inverting-amplifier or ask your own question.

1
Negative Voltage Level Shifting to an ADC
7
How to achieve high impedance input on OPAMP without sacrificing bandwidth
2
Voltage Divider not functioning as expected
3
Is it possible to make a non-inverting amplifier with positive feedback?
0
Unbuffered vs. Buffered CMOS Circuits
0
Linear scaling a voltage by 0.1x
1
Opamp input voltage divider creates wrong voltage - what could be the cause?
0
Sizing Resistors for Voltage Divider Circuit Feeding Solid-State Relay
0
safe negative voltage divider to GPIO pins