Charging batteries and how voltage affects it

I know that when I am charging a battery, we need higher voltage than the battery is rated at in order to "push" current into the battery itself. Right? OK. Since that is true, is it possible for me to use a lower voltage, but into the separate battery packs? I WILL EXPLAIN. I am sending current into a 10 volt light bulb. The batteries I am using to send that current are eight 1.2V rechargeable aaa batteries (NI-MH) put into series. BUT I am using 3 battery holders, 2 of them hold 3 batteries, and one holds 2 batteries, as shown on the following pictures. So basically these battery holders are put into series. Now, when I charge them, how is the voltage distributed amongst all 8 batteries? Like, is the 5 volts going to go to each battery holder charging them individually, even thought they are in series? Is there a way I can charge this battery pack with 5 volts? 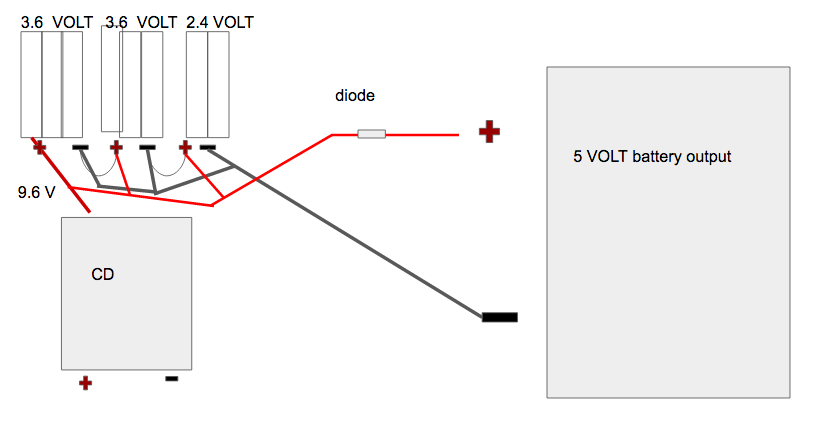 If this doesnt work, how about this?: 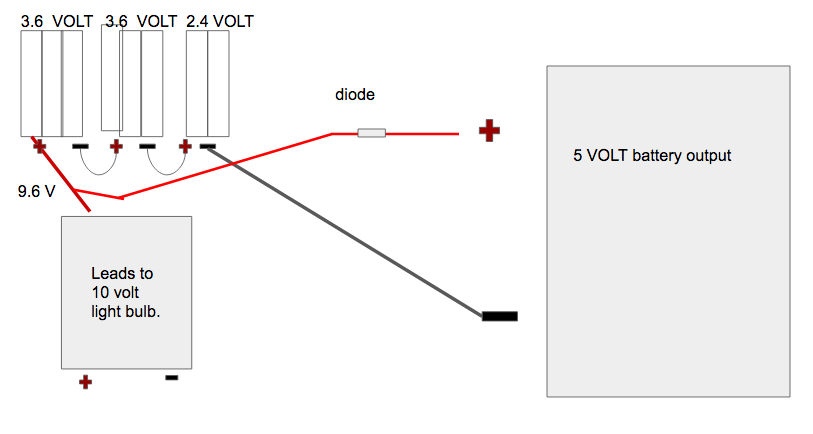 Will each aaa battery get 5 volts, or each battery pack get 5 volts, or my whole setup get 5 volts? The reason I am asking this is because I know that in order to charge a battery you need higher voltage than it gives out, and a diode won't solve my problem of my setup won't work.

You could merge the two sets of 3 batteries and charge them in series with 7.2v (assuming they're balanced) but the pack of 2 batteries needs to be charged separately with a source of 2.4v.

Nevertheless, if you could remove the batteries it would be extremely recommended to charge each cell separately so they will be balanced and the risk of corrosion will be practically zero.

The first diagram doesn't work, since you'd have a short circuit (look at the red/blue lines near the interconnect between the two 3-cell holders - they are shorted through this interconnect): 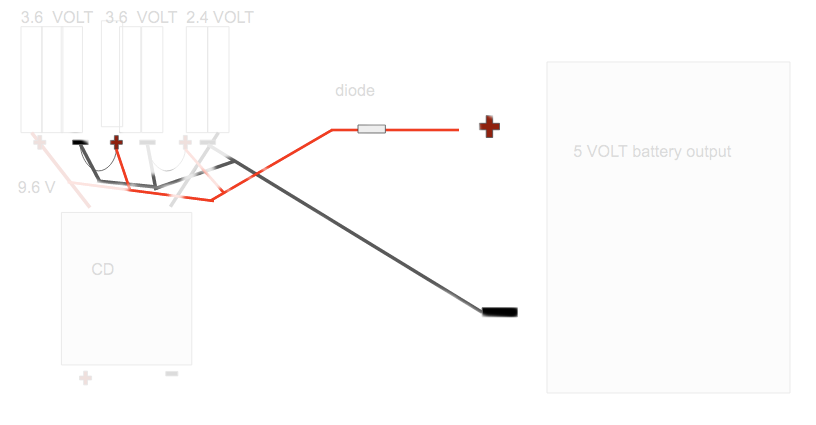 The second diagram also doesn't work, since 5 volts is not enough to push charge through 8 cells; the voltage of the 5-volt battery would be lower than the battery pack, thus the diode will be reverse-biased.

If you do want a solution similar to your second diagram, you can use that, but provide higher voltage — around 12V — and place a series resistor instead of the diode. Select the resistor so that it limits the charge current to a lowish value when the pack is fully charged (20 mA or less is probably fine), since if there's no human around to monitor things, you'll continue pushing that current even when there's nothing more to charge, which only heats and degrades the cells. If the current were larger, the cells would be damaged quickly.

3
Battery Voltage While Charging
3
Are “wider” battery packs less at risk for polarity reversal?
10
Charging Li-ion batteries in parallel
0
Connecting batteries in parallel (concerns)
2
Can I solder 4 AA batteries together in series and make my own rechargeable battery pack?
0
Charging 15 AA battery Pack
1
Concerns About Solar Charging Tree House Lights
0
Why can't large batteries (such as the one by tesla) be charged in parallel
1
series battery connection with different voltages
0
Charging 4 x 12V lead acid battery with solar in series or parallel?