How is it possible that the reverse transfer capacitance of this FET is so low?

A FET has parasitic capacitance, which can be modeled as a capacitor between each of its terminals (gate, drain and source), which I refer to as Cgd, Cgs and Cds, as shown in the image below. 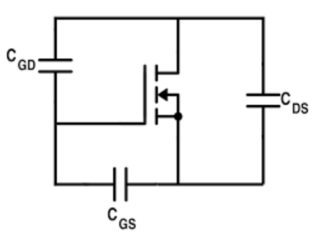 Cgd must be very small, so I approximate Cgs = Ciss and Cds = Coss. However, the series capacitance of these is 0.41 pF, much larger than the measured value for Crss. How is this possible?

\$C_{rss}\$ is not measured by putting a capacitance meter between gate and drain, and leaving the source open.

It is inferred from the ramping behaviour, which is largely controlled by the Miller capacitance, the gate current needed to charge up the \$C_{rss}\$ capacitor, when the drain is slewing in voltage.

This is equivalent to making a three-terminal capacitance measurement across gate and drain, with a guard terminal on the source. This is capable of measuring all three capacitors in that diagram independently, even for the very different values that are shown.

Part of the answer can be inferred from Rds(on) which is 500 ohms (max), ten thousand times the Rds(on) of a typical switching MOSFET (say, 0.05 ohms).

High power switching MOSFETs are generally implemented as thousands of smaller MOSFETs connected in parallel, which makes them amenable to VLSI manufacturing processes, but tweaked for higher voltage.

The individual ON resistances of each FET sum in parallel to make the absurdly small values (milliohms) you see for the whole device.

Unfortunately the parasitic capacitance values also sum in parallel, which is why the pF values you'd expect for an individual MOSFET grow to the nF values you see for the total device.

Hence my hypothesis is that this device is a single FET or a small array (2,4 or so) optimised for low current switching where a few hundred ohms Rds(on) don't matter. Die photos would be interesting...

However it's not a full explanation, as the (scaled by 10000) Crss isn't quite in the typical nF range.

But notice the breakdown voltage is unusually high, at 700V? That implies unusually thick dielectric layers, to keep the field strength (in volts/metre) between drain and everything else down to normal limits.

And increasing the dielectric thickness in any capacitor will reduce capacitance.

Between these effects (scaling, and tuning for high voltage) I think we can explain the unusually low capacitance.

Not the answer you're looking for? Browse other questions tagged mosfet capacitance fet parasitic-capacitance or ask your own question.