For 3 input XOR gate and XNOR gate, by solving the equations I got the result as in the picture. 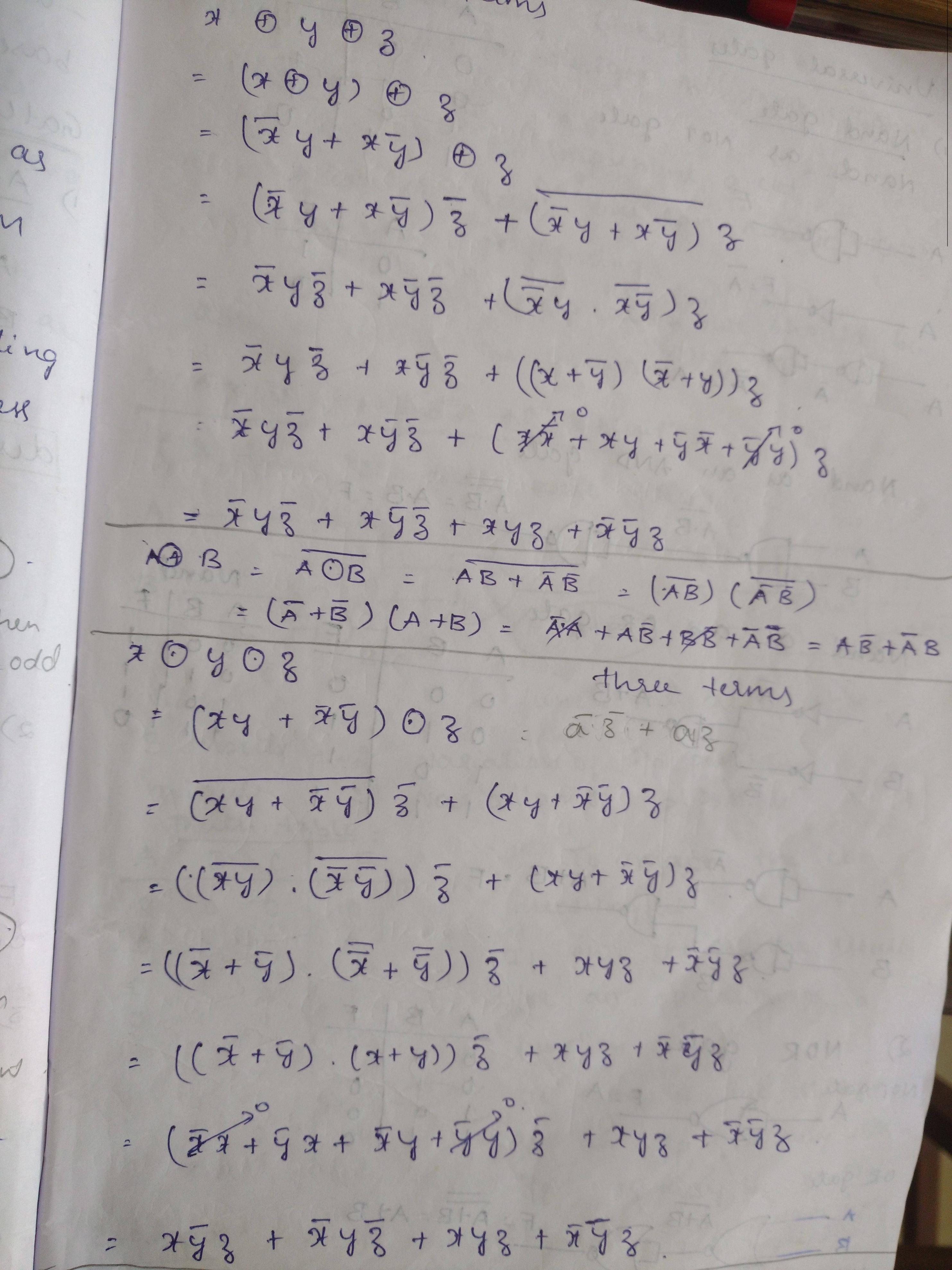 So according to the solution the outputs of the 3 input XOR and XNOR gates are same. This solution holds good when number of inputs to the gates are odd.

For the case of even number of inputs XOR and XNOR are complement to each other.

With this assumption the answer to the circuit in the picture should be option A,B, and C. but the correct answer is D. I am confused as to how?

Thanks in advance for the help.

The misunderstanding is that, given XOR as a logic gate, XNOR is defined as being always its negation.

Having defined your XOR-3 as an odd parity checker (by accepting the minterm \$xyz\$ - otherwise it would be a one hot checker), the correct interpretation of a XNOR-3 would then be an even parity checker (as pointed by Bradman175). This simply means that the expression for your algebraic XNOR-3 is not correct in this context.

A three way XOR gate can be implemented with a XOR-2 itself XORed with the remaining input, and remember that any XNOR has then to be rendered as a XOR in series with a NOT gate. Therefore, a XNOR-3 implementation would be:

This yields a truth table coherent with the functionality expected above (1 when there are an even amount of input at 1). This also shows that a triple XNOR is algebraically rendered as

by carefully expounding all terms, you eventually get to the even parity checker expression which is

XOR for more than 2 inputs is not well defined.

For two inputs, XOR yields 1 if the two inputs are different.

The last NXOR gate needs to have an even amount of inputs high to output high. This is because a normal XOR gate only turns on if an odd amount of inputs are high. The top two pins can never be both on or off at the same time, because their inputs are connected respectively to the same inputs and are the same type of gate except one is inverted.

Now things should be easier.

According to circuit diagram option D is correct. There is no need to use Boolean algebra for this. Just go through the circuit. Output of 3-input EXOR gate is not same as that for 3-input EXNOR gate.

Not the answer you're looking for? Browse other questions tagged digital-logic input or ask your own question.

1
3 Input XNOR gate made with XOR and not gates

3
What is the minimum number of NOR gates needed to implement a 2-input multiplexer?
0
What happens to a 32-bit input when a gate will only output 1 bit?
0
Exotic logic gate
28
How is an XOR with more than 2 inputs supposed to work?
1
Output of XOR gate with high-impedance input
0
Is XOR equal to XNOR when odd number of inputs are considered?
1
AND gates with one common input
0
Pull-down resistors on logic gate and decoder inputs?
0
How to find out if the input of a logic gate is negative in two's complement?