How does voltage know

The resistor R1 in both scenarios are exacly the same, I don't seem to grasp what happens on the physical level to the electrons how they "know" when to dump all their energy at once in resistor R1 in scenario 1 or to divide the energy they have proportionally over the resistors R1 and R2 in scenario 2.

I have read an explenation here, but it's still not clear. How is it possible that the voltage is different at point A going through the same amount of resistance? I would expect a linear relation between voltage and resistance.

Could someone explain what physically happens that causes this?

Is my understanding right? According to here

The resistance drops liniar along the path.

How is it possible that the voltage is different at point A going through the same amount of resistance?

I would expect a linear relation between voltage and resistance.

Not when potential dividers are used unless both resistors change value proportionally.

As you may anticipate, the electrons don't actually know anything. Voltage is actually a battery's difference of potentials of its poles to drive electrons. You may think it as its hydraulic counterpart: pressure. Such that pressure drives the water through tight and wide pipes at a certain flow rate, voltage drives electrons through resistance with a certain current.

If you are interested in a more "scientific" explanation, this is what actually happens:

Electrons explore all possible paths, to get back home to the battery's other terminal. Electrons will go meters off to the side, just because that is another path back from whence they came, even if only 1 electron/second explores that path. Why do electronics do this exploring? because the electric fields urge/push/drive that exploration.

Our circuits often include huge volumes of air, and we think our circuit is just the copper wiring and the resistors and capacitors and ICs and PCBs. But the air is there, extremely high resistance, so we ignore the air.

In your two circuits, the electric fields encounter different length paths, and the volts/meter is different. Most importantly, the volts/resistor is different and we use Ohms Law to handle that situation, while we ignore the air.

I have found an explanation what I was looking for here, here and here. I think the main thing I needed to realize is as @OlinLathrop and @GregoryKornblum mentioned in a comment, that voltage is not energy itself, voltage is just a difference in "height" so to speak and it tells nothing about the electron itself. It only tells how much energy the electron would have gained if it rolled down the hill. 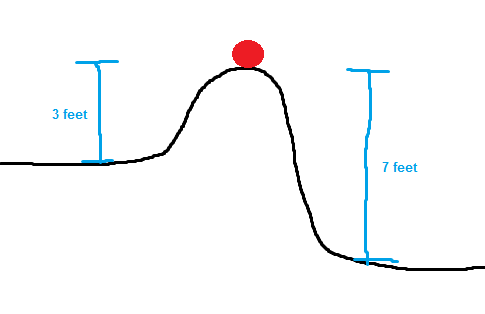 And as to the diagram here, the 2.5V is there because its not at the ground level yet (0V) and the real energy can be seen in the current because that is the energy carrier and if the current is slowed it loses potential energy. I think the resistance in this situation can be seen as if you drop the ball from the hill and blowing wind agains it upwards (creating drag) it slows down and when it arrives at the ground it has less kenetic energy because its speed was reduced by drag and thus lost gravitational potential energy.

Correct me if my understanding is still incorrect.

-2
Voltage drop remaining voltage
26
Is voltage the speed of electrons?
8
How does the electricity "know" the ratio of the resistance in a voltage divider?

1
Need to build a circuit resembling fluid flow through porous media
4
Understanding current, voltage and resistance
3
How to choose a properly rated power resistor for pulsed current?
1
In a DC circuit with one battery and one resistor, why does the voltage drop remain the same irrespective of the value of the resistor?
2
How is the energy consumption of a ciruit component calculated?
0
The Relationship of Power and Heat to Length of a Folded Resistor
1
24V supply run 12V 3014 LED strip in series; help with resistors for series
0
What exactly is electric potential (what's wrong with my picture of it)?