The schematic of Klipsch SW-12 is on Page 15-17 of the following service manual:

[The schematic's Sheet 3 with the above resistors highlighted added 2/12/17.] 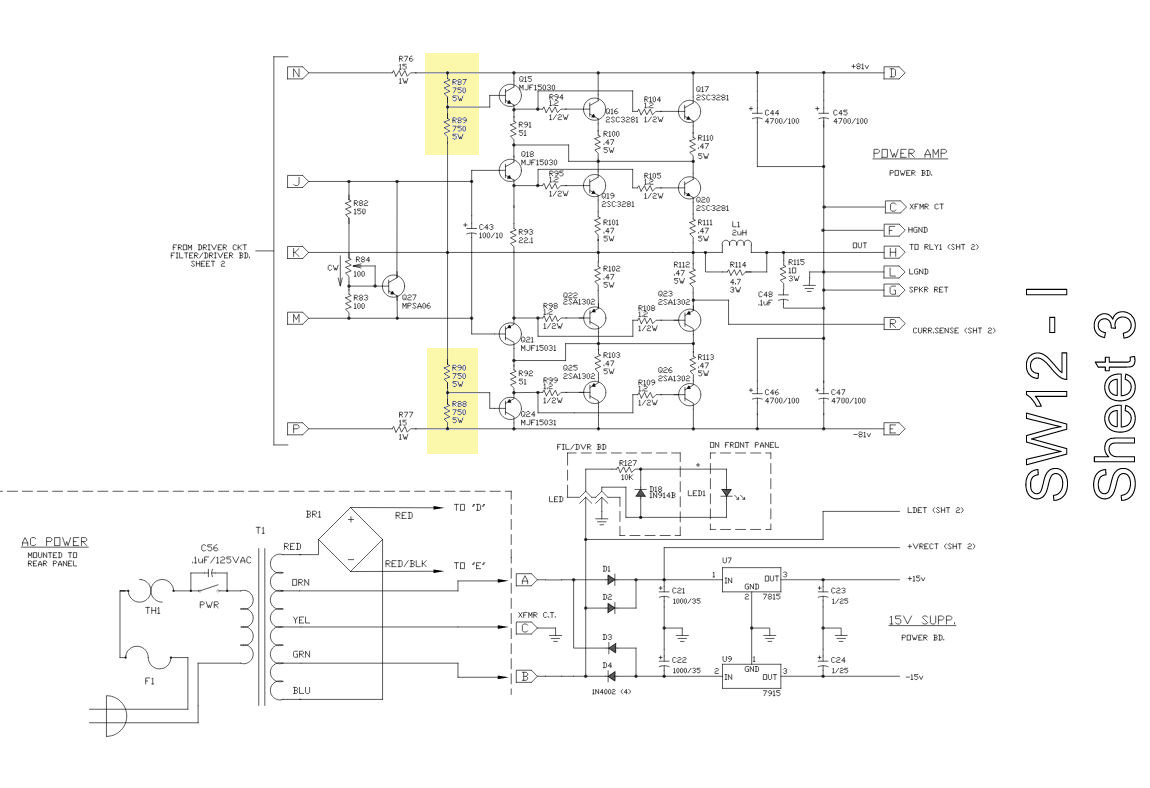 One of them reads only 426 Ω (off the circuit), so I'll have to replace it for sure.

The following resistors do fit and seem to be stocked by distributors in the USA now.

[H is 13 mm greater than the original's, but W and L are the same - will fit; same pin spacing]

[H is 13 mm greater than the original's, but W and L are the same - will fit; same pin spacing]

Probably the amp will work either way. It's hard to say which is the intended design, what the schematic says or the BOM says.

One possibility is that this circuit was originally designed with 750 Ω resistors, and these turned out to be problems in the field, so a revision was issued changing them to 1.5 kΩ as a quick fix. This quick fix probably makes the problem go away (the resistors being over-stressed and failing), but may compromise other parameters of the amp slightly. It wouldn't be the first time a company figured a little reduction in performance will be unnoticed, especially if nobody is looking for it, but failed parts are definitely noticed.

Electrically, it looks like lower resistance is better, with the tradeoff being too much dissipation and heating inside the chassis if too low. Whoever designed this originally thought about it enough to spec 5 W parts, but maybe missed how the voltages can vary and/or decided not to look too hard because the answer would have been uncomfortable. Yes, this happens. Not everything is caught in a design review, or even gets a proper one, when a junior engineer sticks his head in the sand.

The right answer for the field bullitin might have been 750 Ω 10 W resistors, but those would have been physically impossible to substitute in the given locations with the existing space and pads.

I would not replace these resistors with 750 Ω 5 W. That's clearly abusing the parts. Ideally that would mean these resistors can take up to 61 V across them, but note the 81 V supplies. They should average to 40.5 V across them, but power doesn't follow the average voltage. The RMS will be higher than the average with large AC signals superimposed.

You could try replacing with 750 Ω and a bit higher than 5 W. Those probably don't fit in the original footprints. The official service bullitin can't recommend flying parts, but you can do that one-off yourself. Getting these resistors away from other parts is probably good too.

1.5 kΩ apparently works well enough. A reasonable compromise might be 1 kΩ 5 W resistors. Those should dissipate 3/4 of the power the original ones did.

Make sure to replace all four resistors with new ones of the same type, regardless of what you choose. These are basically voltage dividers, so their ratios are important.

IF you choose 1500 Ohms the hFE in Q15,Q24 must be matched to each other very tight and the lower the hFE the tighter the requirement. Otherwise excess base loading occurs i.e. not +/-40V and this reflects to a large DC output.

If the Q15 hFE is only 30 and emitter load is est. 33 ohms then Zin is ~1K in parallel with those resistors. So hFE is a dominant factor and low hFE is a big problem. Too high hFE then adds non-linearity which is also a problem for distortion. So Q selection is just as critical as R.

So the choice of R value has everything to do with hFe of Q15 and Q24, which is an unknown. The factory may have these matched with higher values than nominal by custom order or pre-testing. If only 1 side is exposed to air then you have to derate Pd by at least 50%.

Not the answer you're looking for? Browse other questions tagged amplifier resistors audio or ask your own question.

3
What should the minimum voltage rating of replacement power resistors be?
0
Selecting good replacement resistors for SW-12's R87, R88, R89, and R90

2
Is it OK to replace a 750 ohm 5W ceramic resistor with a 750 ohm 10W ceramic resistor
0
Audio amp testing: is this safe?
3
What should the minimum voltage rating of replacement power resistors be?
1
Setting the bias for the power amp section of an audio amplifier?
0
Signal parameters compatibility between DragonFly 1.5 & old amplifier
0
Audio amplifier alignment procedure questions
4
Which is broken, the amp or the driver of this subwoofer?