I have a NTC thermistor It has zero-power resistance of 5kΩ at 25°C. I will use general voltage dividing and reading but I have 2 questions.

Let's have a voltage divider with 10VDC input 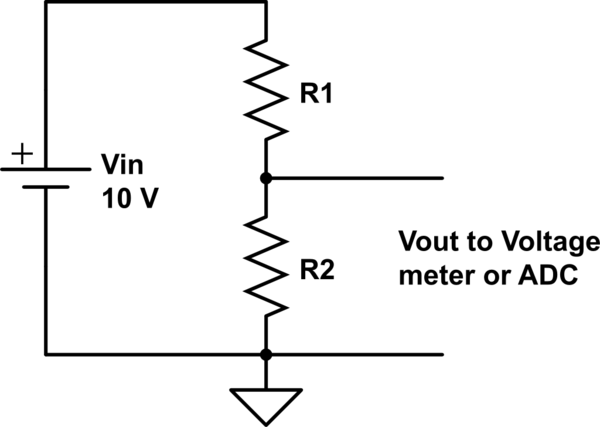 Generally Vout = Vin*R2/(R1+R2) if we think the output current =0. If there's some substantial load, the formula is more complex.

The hard part: How we solve the temperature if we know the Vout and the other resistor? It's quite complex calculation and we must have the curve how the resistance of the NTC depends on the temperature

NOTE: Vout = 0V does not mean 0 degrees and Vout changes not 1V per a degree. The latter is called also "Vout has non-linear dependence on the themperature"

In the past very complex circuits were developed to make the dependence between the voltage and the temperature simpler. An example:

The selection of the components requires a strong math. But it's possible to achieve the following:

This is a typical bridge for resistor-like physical sensors. The exact calculations are beyond the scope of this answer.

The operational amplifier circuits increase the possiblities and reduce a little the complexity of the calculations. The bridge can be replaced by a differential amplifier.

A computer (input via an ADC) moves all difficulties to the software. It does not remove the need of strong math, but in software the temperature-ohm-dependency can be taken into the account exactly. This is the used way also in the digital multimeters that have a temperature measuring range for a specific probe.

Your other resistor: nearly 5 kOhm, for example 4,7 kOhm is a good choice because

Read other articles in this site (there are several) and find some application notes and circuit diagrams.

ADDENDUM due the comment: Self-heating is possible to compensate or reduce to be non-disturbing.

Reduction: Switch the Vin off for most of the time or make the thermal contact to the ambience more effective

Compensation: by hard math. If the self heating does not cause substantial heat generating or heat consuming extra processes, you can assume a known heat source in a linear medium. This requires also the time been taken into the account.

I recommend the reduction. Measure once per a second a 10 ms period and keep the Vin off for 990 ms. The self heating is reduced 99%.

To maximize the resolution, match the thermistor value at the operating temperature.

Usually it's best to ground the thermistor so that you are not running your supply (typically it is the ADC reference) out where it can pick up noise.

You will get a lot of self-heating with a 10V supply (with most thermistors, especially in still air). That's 5mW. Take care that they do not specify the dissipation constant in some unrealistic situation (eg. flowing water at 1m/s) if you are operating in something like still air.

Often the series resistor matches the NTC resistance at room temperature to maintain maximum linearity. It doesn't matter much whether it's in the top or bottom position. Typically it's in the bottom, but it may depend on how you are interfacing it to the rest of the system, and how you are programming it.

17
How to measure temperature using a NTC thermistor?
5
Alternative to NTC Thermistor
2
Will the B constant for 10k ohm NTC thermistors be the same from all vendors?
1
NTC thermistor series/parallel resistor calculation for MCP73833 linear Li-Ion charger
0
How to choose NTC thermistor?
1
How do I accurately measure the B value of an NTC thermistor?
1
Thermistor replacement
0
What factors/parameters shall be considered (or compare with original) while replacing NTC resistor?
0
Thermistor in parallel