This question arises from a power factor correction example, consider the circuit below:

Now I kind of understand why the reactive components disappeared, since the inductor and the capacitor worked to cancel each other out. I don't however understand where the extra 64ohms of resistance came from.

And since we are on the subject, I'd also like to know what happens to the voltage drop across the inductor and capacitor in the power factor corrected situation. Do the impedances disappear and therefore there wouldn't be a voltage drop? 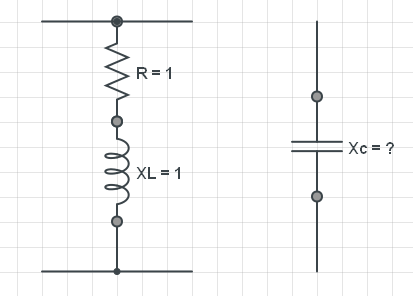 hence place an additional capacitive reactance of \$\small -j2\$ in parallel and the overall load across the source (i.e. the load that the source sees) is \$\small 2\Omega \$ resistive. 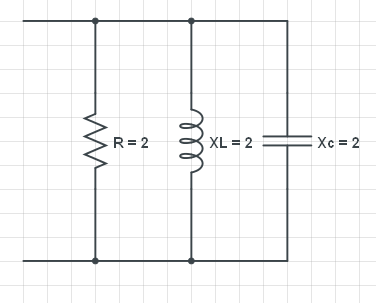 Thus, the power factor is unity but the effective resistance seen by the source is \$\small 2\Omega \$, hence the power [W] transferred to the load is less than would be the case if the true resistive load were connected directly to the source.

For an intuitive answer,

The j is significant since it denotes +90 deg for impedance and -j is -90 deg. But if we take the overal load then we can take the absolute values to get magnitude but must use j if we want to remember phase shift, relative to R which has 0 deg phase impedance.

For parallel RLC circuits there will be a frequency where the Xc and XL will be equal in amplitude and then cancel due to their opposite phase and magnitude. This is the highest impedance, and would be infinite, but in reality the C also has a leakage R, not given, so then it is not infinite.

But in this example it is only 50 Hz the LC impedances are not equal so they partially oppose each in the net load, so impedance rises as you have shown. There is also a phase shift which you have not computed.

The rate at which impedance rises with f and C depends on the L/R ratio for series R. But that's another question, where we define bandwidth by 50% power bandwidth,BW and thus at resonance Q=Xc/R=XL/R=f/BW

Not the answer you're looking for? Browse other questions tagged power circuit-analysis impedance or ask your own question.

0
Designing a purely reactive circuit with the following requirements
4
Power factor correction in a simple phasor circuit
0
RLC circuit with a resistance combined with an inductor. Is my solution correct?
3
Why is the characteristic impedance usually purely resistive?
2
Reverse engineering and reimplementing a garden hose water timer
2
Understanding equation for the quality factor of an RLC circuit?
2
LC in parallel with R circuit resonance
1
Why is an infinite reactance an open circuit?
0
Is a power system acting in leading mode after power factor correction bad?