How Is Intensity of Blue Light Measured?

As a hobby project and to help solve issues getting up early in the morning (specially given that it's winter and the sun isn't up until long after I am) I'm trying to find a bright blue light that I can put on a dimmer. I've read that the eye (even closed) detects blue light as a cue that it's time to wake up, so by placing a bright blue light on a dimmer to turn on gradually 30 minutes before waking up, this will allow me to feel more rested.

There are presently alarm clocks that do what I'm looking for, however only a couple models and they price a lot higher than it seems like they should. I'd also much rather do it myself and gain knowledge in the process. Based on my general research, I've determined that LEDs are substantially more efficient than incandescent bulbs, however the vast majority of LEDs I find online are incredibly weak.

I'm having a lot of trouble comparing different bulbs, in terms of the perceived brightness in the blue spectrum. The best I've been able to find is the lumens or lux unit, however those are largely centered around green output. (Because the human eye perceives green light the most.) It's a pretty big impact - blue LEDs rate incredibly poorly and a green LED would be 10 times as many lumens for the same output. But if I understand correctly, green light makes little/no difference in waking someone up.

I've been searching for many hours trying to find some way to compare various bulbs on the blue output, and I haven't found much of anything. Surely in the vast world of the internet there is someone who's taken it upon themselves to compare the output of various blue LEDs including ones powerful enough for my purpose. Does anyone know how or where I could find a comparison of bulbs based on perceived brightness in the blue spectrum? Is there another technical term for brightness of light in the blue spectrum?

I feel for you. Been there done that. I design LED grow lights for Horticulture Research at the University of Florida.

LEDs are so much more complex than one would think. So much so I am currently writing a paper titled "Understanding LEDs"

The bandwidth of a Royal Blue stretches out to around 400nm near UVA and hitting the limit of human advisably (about 400nm). Blue does get as close so it is still considered Luminous. 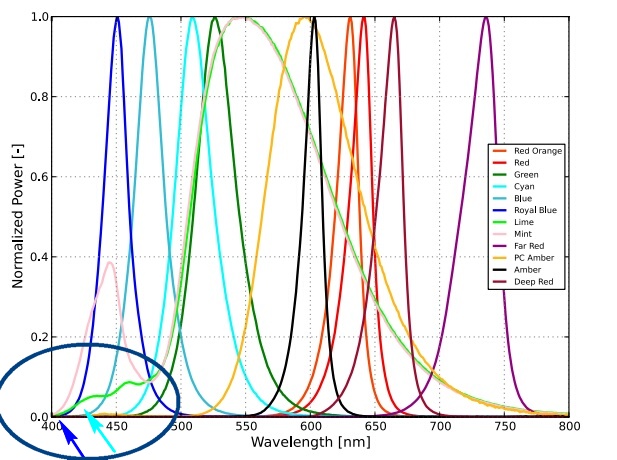 Blue is visible so measured in Luminous units typically lumens.
Some of Royal Blue wavelength spectrum is not really visible. The eye can react to 400nm but it is perceived so much less by the eye Royal Blue is almost always measured in Radiant Units mWatts of flux.

I have seen studies on the photoreceptors in the retinal ganglion cells with a highest sensitivity of 470-490 nm blue light on the effects of short-wavelength light in humans. Several studies have explored the efficacy of monochromatic blue or blue-enriched light in the treatment of syndromal seasonal affective disorder(SAD) and Sub-SAD.

To answer your question on comparing mWatts to Lumens it can be estimated.

The perceived brightness, or luminous efficacy, of light is technically specified by the International Commission on Illumination (CIE). Each wavelength efficacy is related to a wavelength of 555nm (Lime Green).

I am only somewhat confident these number are relevant. I do need to have someone else verify they are correct before I publish.

I created this table for common LED colors 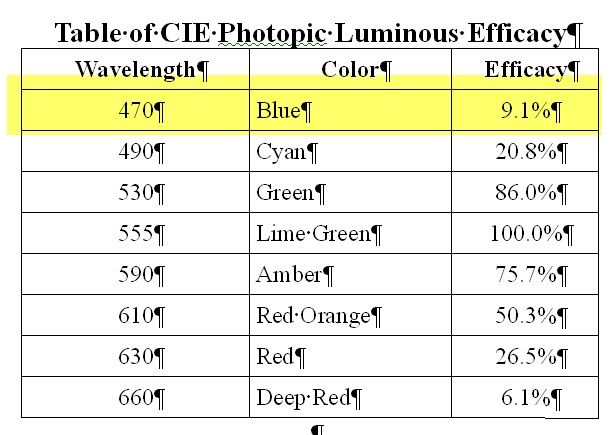 What I am going for here is the factor to convert mWatts to Lumens. To convert other colors to the 555nm equivalent output flux, multiply the LED's published lumens by the reciprocal of the CIE factor.

CIE sets the spectral luminous efficacy of the human eye for each wavelength starting a 555nm. The CIE defines photopic vision as 683 lumens/watt at 555 nm.

This I wrote a PHP script to create an SVG image from the table of CIE table of CIE Photopic Luminous Efficacy. 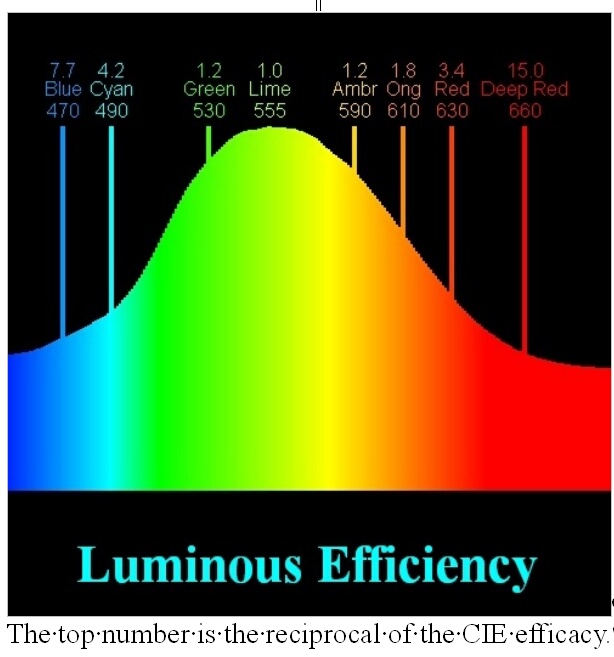 Royal Blue wavelength is 450 where the CIE luminous efficacy is 0.038.

Using the CIE photopic luminous efficacy for 450nm of 0.038 we can convert lumens to the approximate Radiant flux (mWatts):

None of this should matter. If you are using Blue (470nm) and not Royal Blue(450nm). Blue is almost always specified in lumens. You should be able to ignore any measured in mWatt.

You probably want either Cree XPE or Lumiled Rebel ES Color LEDs. Which depends on what is available at the time you order them.

You probably want the ones circled in Red. But you are going to need between 6 and 8 each to reach 250 lumens.

Notice the blue circle on the Lumiled Blue. This is another thing you have to watch out for when comparing LEDs. LEDs are spec'ed out at various currents. The one circled is pumping twice the current of all the others.

Temperature affects luminous flux significantly. Some are spec'ed at 25º C others 85º C.

My other answer just touches the tip of the iceberg.

It answered the main question How Is Intensity of Blue Light Measured?

Actually my previous answer was for a different question:
How Is Luminous Flux of Blue Light Measured?

But that's not all, Intensity is often confused with Illuminance and Luminance.

So we have four methods of measuring the amount of light emitting from an LED.

No one has asked the question what is the difference between these 4 measurement.

But that's not all. I touched on this in the previous answer.

Radiometry is the study of optical radiation of light, ultraviolet radiation, and infrared radiation. Radiometric is a measurement of the actual flux emitted from the light source.

Photonics measures light as quantum particles called photons. Photons are elementary particles of light which carry light's electromagnetic force. Photons, travel in straight lines at the speed of light, and carry a fixed amount of energy. Photons have two distinguishing characteristics, direction and wavelength. Photons are a quantum measurement of light particle energy measured in the quantity of photons per second. Typically measured with some sort of photon detector which counts the number of photons that hit the detector's surface within a period of time.

Photometry, is about human optical visual response to light (luminous spectral response). Photometric is a measurement of the flux emitted from the light source and then adjusted for its sensitivity to the human eye. Photometric measurements only includes light visible to humans. The human eye is most sensitive to green at a wavelength of 555nm (Lime Green) as determined by the CIE (International Commission on Illumination). This 555nm wavelength is the international photometric standard to which all other wavelengths are compared.

This sums it up, almost

Then there are the official SI Units of Measure

If that is not confusing enough

I have not begun to touch on the various LED datasheet parameters that significantly affect the decision making process.

I am fairly confident that most engineers use Luminous Flux (lumens) as the major criteria in LED selection decision making.

Using just the Lumens Spec from the Datasheet is a huge, yet very common, mistake.

Of the 16 parameters in the above list there is one that I have found to be the best parameter to quickly assess an LED. It's not Lumens.

I would bet a fair amount of money that no one reading this would pick which ONE of the 16 parameters is the most decisive.

I could tell you, but that should be another Question.

Another coll question would be: Why and How are Most White and Green LEDs made from Blue LEDs.

Hint: Ever notice that White LEDs have a yellow coating?

That brings up another Question, Why are these LED Light Bulbs Made Like This?

This is actually going to be a very important thing when manufacturing a Blue Sleep Light. While some of the Sleep Studies found it required about 250-300 lumens. But would five 50 lumen blue LEDs do the job? Not likely. 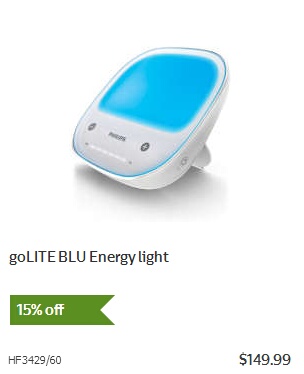 Isn't $150 a lot for a Blue LED light? There is a good reason it costs this much. If you knew, you would consider it a bargain.

I design Research Grade LED grow lights and so does Phillips. Phillips does a pretty good job, one of the best.

I'm not a normal engineer. I look at things from a different perspective than most and connects the unconnected dots. Advice from an old man, maybe even wisdom, Do not attempt to be normal, it will rob you of the opportunity to be extraordinary.

UF LED Research Paper Two of the authors, Thomas A. Colquhoun and Kevin M. Folta are the guys I do the LED grow lights for.

I needed the same thing (albeit only for my office during dark winter months, since the light seems to focus me). I use 5 12V car LEDs in small light diffusers to get a decent effect. I also keep an RGB pulser by the desk, usually set only to show blue.

You can get 12V blue LEDs for pennies on ebay, drive them with MOSFETs. If using an Arduino, you can just wire them for max brightness and use PWM to step it down.

Not the answer you're looking for? Browse other questions tagged led light spectrum brightness lighting or ask your own question.

0
shift register RGB led brightness
25
Why are there only RGB and RGBW-LEDs, but none with more chips inside one housing?
0
High power LED vs. standard LED
1
Does color rendering index increase with brightness?
3
How to compare brightness of different color LEDs (not RGB)?
6
5V vs 12V addressable LED efficiency
0
Effect of changing PWM frequency of a light source on perceived brightness
0
How to specify UV high brightness LEDs?