I need to find the magnitude of transfer function of the follwing two filters. I tried to do the calculation but I get two functions that seems to be incorrect. Here is what I found 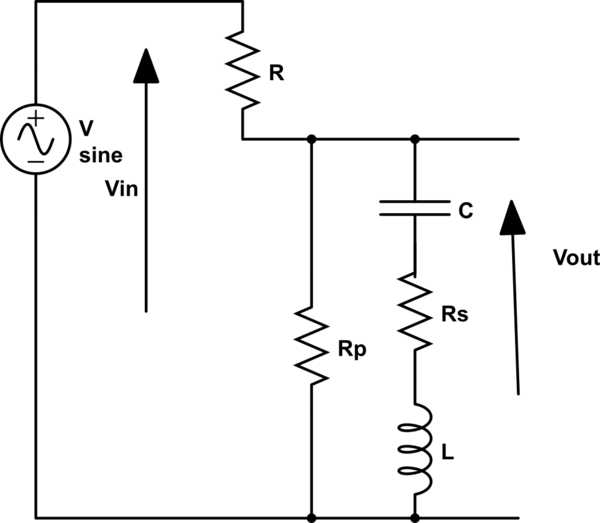 Are those the correct transfer functions of the two filters?

I wrote the ratio

Which should be the same as above.

Nevertheless this does not seem right since, for resonance frequency the ratio is zero, while it should not be zero if \$R_s\neq 0\$.

Is there a simpler way to get the correct result?

Take the first example and make life a little easier by simplifying it. For instance, it can be shown that R and Rp can be combined into a single series resistor being fed from a new voltage source that is reduced by the potential divider ratio. You then get a new circuit that looks like this: -

Clearly the value R in the above is the parallel combination of the two resistors in the original question. Solving: -

To get back to the original TF you need to reduce the above TF by the voltage potential divider formed by the original R and Rp.

The transfer function of the first circuit can be determined in a few lines just by looking at the circuit. This what Fast Analytical Circuits Techniques (FACTs) bring you. Here we go:

When I say "drive", I mean the resistance you "see" in the terminals of \$C_1\$ or \$L_2\$ when you temporarily remove them from the circuit.

The complete transfer function in a low-entropy form is thus:

I did not write a single line of algebra, just inspecting the network. Look at the FACTs in an APEC seminar from 2016:

For the second circuit, the principle remains the same:

Not the answer you're looking for? Browse other questions tagged ac filter transfer-function passive-filter or ask your own question.