I'm building one of those DIY reflow ovens from a toaster oven, a K-type thermocouple, a MAX6675 breakout board, a SSR and an Arduino.

I'm having a lot of trouble getting a reliable temperature measurement from the MAX6675. With the Arduino powered (through a USB connection) but the mains part of the circuit disconnected, I get a good temperature measurement. But as soon as I plug the mains in, it goes haywire. It's not even particularly predictable; most often, it just reads zero, but sometimes it reads about 750 degrees, other times it wanders up and down between zero and a hundred degrees or so.

It's a bit hard to tell, but it seems that just plugging the earth pin of the mains circuit in is enough to cause this. I guess I have a noise problem, and since it seems to be the earth connection that does it, I guess it's a ground loop.

The thermocouple is a screw-in probe type, which I've insulated from the body of the oven using kapton tape. I've connected the braided shield to the Arduino's earth; on the scope, this improves the noise situation considerably, though it doesn't seem to make much difference to the measurement. Initially I had the MAX6675 mounted fairly close to the SSR, but have since moved this, again without it making much difference.

What else should I try? Would connecting the arduino's earth to mains earth be a good move? (The Arduino is being powered from a laptop that probably doesn't have a very good earth).

Thanks for any suggestions!

FWIW, here's what the 'scope shows between T+ and T-: 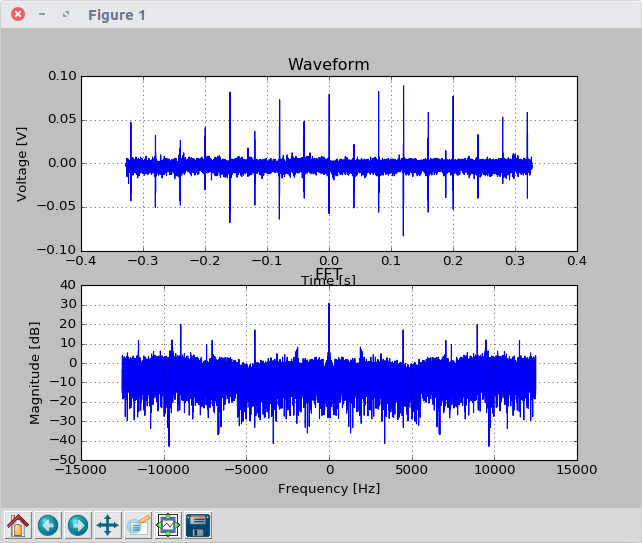 The peaks every 40ms look fairly nasty, but it's not immediately obvious to me what would cause them. There is a solid state relay nearby, but it's just off at this stage, so wouldn't expect switching noise from it.

If your laptop is powered via a two-pin AC outlet plug then there will be no earth. In addition to there being no earth, the "0 volts" wire of the lap-top will be rising up and down to the tune of several volts p-p at the frequency of the laptop's charger. It, almost certainly will be a switching power supply running at about 100 kHz.

I would recommend that you do as you suggest but as a quick interim, connect a wire from the Arduino 0 volts to the body of the oven.

If that gnd is floating then power can be carrying CM noise and another CM choke with cap to AC gnd to further increase impedance ratio to reduce noise levels.

Additional active shielding is necessary when above is insufficient grounded with sheath at ADC input only.

Then when this is not enough , good CMRR Op Amp with 50Hz notch filter can remove >60dB if CM is within acceptance range.

The trick is not to guess but try to make it worse then identify the source coupling, conducted and/or radiated then design the method of attenuation by impedance ratios and shielding or balancing the source of noise with same methods, twisted pair, shielding etc.

Often AC gnd is sufficient to make a big improvement but imperfect, then software averaging, or signal conditioning can also be useful.

Install an RC filter in both thermocouple leads. You don't need exact temperature, so a few degrees error with inserted-100-Ohm resistors and their solder joints is a worthy experiment. The filter also needs capacitors, so let's use THREE: one differential, after the resistors, right by the MAXIM; the other TWO go from V+thermcoup to GND right by the MAXIM, and from V-thermcoup to the same GND solder point. I'd go with 1uF ceramics. Result: 1.6KHz F3dB.

You could also bias the thermocouple at VDD/2 (2.5 volts?) instead of letting nature and its electric fields push up and pull down on that tiny differential voltage; make a voltage-divider from VDD to GND, and tie ONE of the thermocoup leads to the VDD/2 node.

Not the answer you're looking for? Browse other questions tagged arduino noise thermocouple or ask your own question.